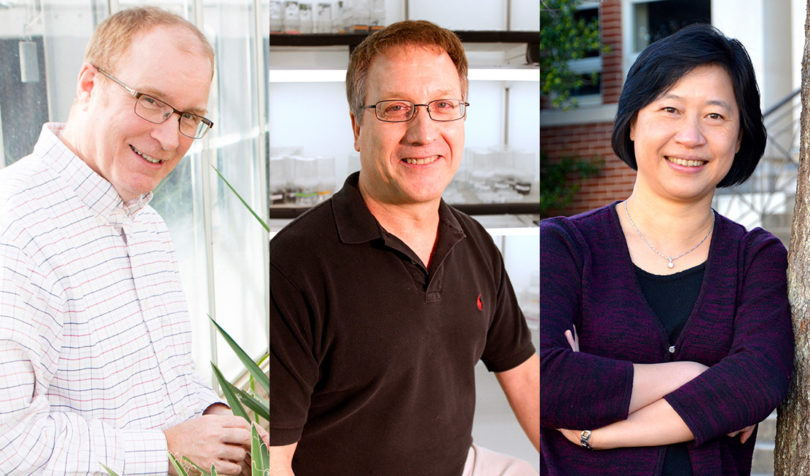 Three UGA faculty members — James H. Leebens-Mack, Wayne Allen Parrott and Chung-Jui "C.J." Tsai — have been named Fellows of the American Association for the Advancement of Science, an honor bestowed by their peers for "scientifically or socially distinguished efforts to advance science or its applications."

Three University of Georgia faculty members have been named Fellows of the American Association for the Advancement of Science, an honor bestowed by their peers for “scientifically or socially distinguished efforts to advance science or its applications.”

These three faculty members are among 396 new AAAS Fellows who will be presented with an official certificate and a gold and blue-representing science and engineering, respectively-rosette pin on Feb. 17 at the AAAS Fellows Forum during the 2018 AAAS Annual Meeting in Austin, Texas.

“Selection as an AAAS Fellow is a major milestone in a scientist’s career, and thus the University of Georgia is enormously pleased that three of our faculty have been selected for this honor,” said David Lee, UGA vice president for research. “This peer recognition is important to our faculty, and it also brings added distinction to the university.”

The 2017 AAAS Fellows, all members of UGA’s Plant Center, are:

James H. Leebens-Mack, professor of plant biology in the Franklin College of Arts and Sciences, is noted for distinguished contributions to plant evolution and genomics.

Leebens-Mack co-led a team of scientists to sequence the genome of Amborella trichopoda, a small, shrub-like tree found only on the main island of New Caledonia in the South Pacific. Amborella is the sole survivor of an ancient evolutionary lineage that traces back to the last common ancestor of all flowering plants over 150 million years ago. Just last month, his team published the garden asparagus genome and identified the sex determination genes on the young Y-chromosome of male asparagus plants. Leebens-Mack is leading several other projects aimed at sequencing and comparing the genomes of species distributed across the land plant tree of life in order to elucidate the genetic basis of innovations throughout plant evolution, including resistance to plant diseases, adaptation to arid environments and storage of carbohydrates.

Wayne Allen Parrott, professor of crop and soil sciences in the College of Agricultural and Environmental Sciences, is honored for distinguished contributions to the development and implementation of plant transformation technologies and to the discussions of the science and regulatory processes associated with genetically modified organisms.

For nearly 30 years, Parrott has conducted research on the discovery, evaluation and use of agriculturally important genes in crop plants, using both molecular markers and genetic engineering, especially in soybean and switchgrass. His emphasis is on developing the methodology for use and safety assessment of genetically modified crop plants, and he has published a guide for environmental risk assessment of GMOs. Parrott has traveled extensively in Latin America and other countries, advising legislators and regulators on the requisites for a functional regulatory system that ensures the safety of genetically modified products.

Chung-Jui “C.J.” Tsai, Georgia Research Alliance Eminent Scholar and Winfred N. “Hank” Haynes Professor, is honored for pioneering research contributions in forestry biotechnology and genomics. Tsai holds a joint appointment in the Warnell School of Forestry and Natural Resources and the department of genetics in the Franklin College of Arts and Sciences.

Tsai, a plant biologist with a passion for trees, focuses on creating high-yielding trees for use in biofuel. She dissects the molecular mechanisms that affect tree fitness and biomass productivity, searching for ways to create better-growing trees by making them more resistant to stresses like extreme temperatures, disease and drought. Tsai pioneered the application of CRISPR genome editing technology to forest trees, and her team demonstrated unprecedented efficiency in generating transgenic null mutants. This translates into significant time savings for forest genetics research, bypassing the long generation cycle in traditional crosses. She has also made significant contributions to genomic resources development for Populus, the model species in tree genomics research.