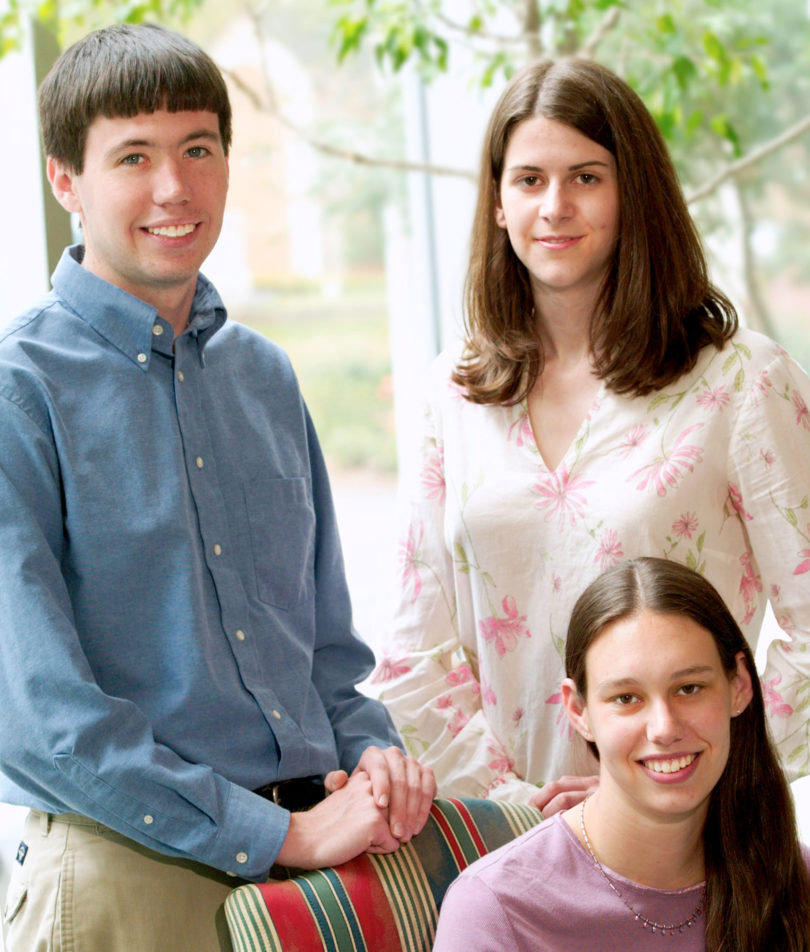 Goldwater Scholars from UGA are (from left) Chris Tarr

Three UGA students have been named recipients of the Barry M. Goldwater Scholarship, one of the nation’s top academic awards for undergraduates.

The scholarships, which are awarded to sophomores and juniors who plan to pursue careers in mathematics, engineering or the natural sciences, provide up to $7,500 to cover the cost of tuition, fees, books and room and board.

“With these Goldwater awards, Chris, Amy and Rebekah again prove that UGA students are on par with the best undergraduates in America,” says President Michael F. Adams. “They add to a phenomenal string of academic recognitions that clearly demonstrate the superior nature of the educational experience made possible by our outstanding students and faculty.”

A school can have a maximum of four Goldwater winners, and UGA is among 33 institutions with three or four recipients. UGA is one of only seven public institutions in the South with three or four winners.
Jere Morehead, director of the Honors Program, notes that 13 UGA students have won Goldwater Scholarships since 2001. “Thanks to the outstanding students who choose UGA, and the outstanding faculty that mentor these students, we continue to have great success in this prestigious competition,” he says.

Tarr plans to obtain a doctorate in chemistry and pursue a career in chemistry research. He is interested in the relation of chemistry to biology and in understanding the role of chemistry in living organisms. This past summer he worked in the lab of a chemistry professor conducting research on mustard gas.

Tarr is a Ramsey Honors Scholar and a Governor’s Scholar, is on the President’s Academic List and has been elected to Phi Kappa Phi scholastic honor society. He is president of the UGA student affiliate of the American Chemical Society and is on the Student Advisory Board for the Franklin College of Arts and Sciences.

Sexauer intends to earn an advanced degree in microbiology and immunology and pursue a career in biomedical research, focusing on the function of the immune system in diseases. She has worked in a laboratory in the College of Veterinary Medicine conducting research on poultry diseases and on a bacterium in white-tailed deer serum.

A Foundation Fellow, a Presidential Scholar and a member of Phi Kappa Phi and the National Society of Collegiate Scholars, Sexauer has studied in England, Hungary, Poland and Costa Rica. She is on the Honors Program Student Council, is captain of the Honors Program Relay for Life team and plays violin in the Athens Symphony Orchestra.

Rogers plans to earn a Ph.D. in biological sciences and pursue a career in molecular genetics research at a university or research institution. She has worked with UGA scientists on several research projects and helped develop a computer program that models sampling procedures in environmental contamination testing.

Rogers is a Foundation Fellow and a National Merit Scholar and was a semifinalist in the Intel Science Talent Search. A member of the National Society of Collegiate Scholars and Golden Key honor society, she has been a volunteer for the Georgia Junior Science and Humanities Symposium and performs in her church orchestra.

UGA’s Goldwater nominees were chosen by a selection committee headed by Karl Espelie, professor of ­entomology.

The Goldwater Scholarship, named for the late U.S. Sen. Barry Goldwater of Arizona, is presented by a federally endowed foundation established in 1986. The foundation has presented 4,272 scholarships worth approximately $42 million.