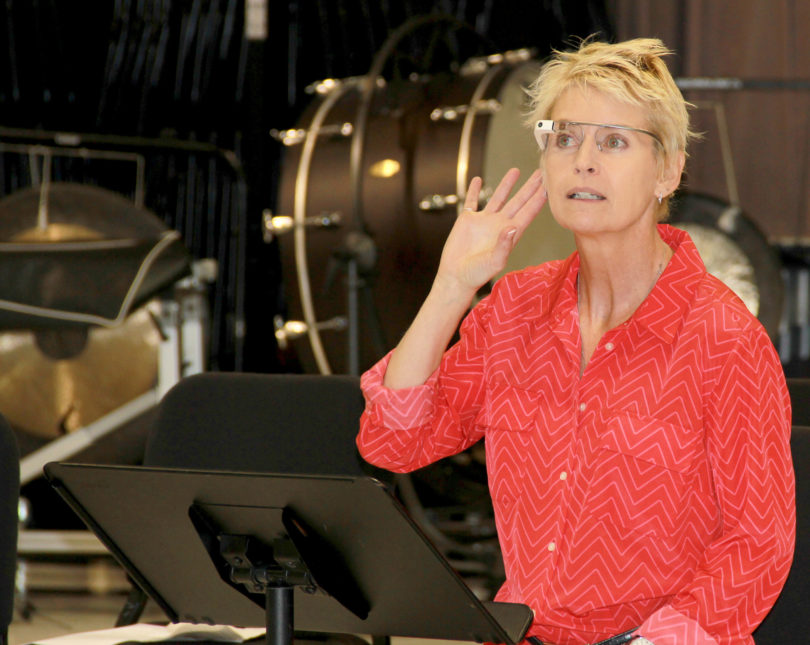 Who said classical music had to be old-fashioned? Cynthia Johnston Turner, director of bands at UGA, may conduct music written 300 years ago, but she is a 21st century kind of professor.

Turner has coupled her teaching—and research—with technology, sharing the musical score with musicians on an iPad to help them understand the music more and experimenting with a wearable technology called Lumo Lift to help improve posture for conductors.

When Turner arrived at UGA’s Hugh Hodgson School of Music from Cornell University this summer, she brought with her a Google Glass lab, using the new device to teach and explore music in ways Beethoven never imagined.

At a Nov. 12 Spotlight on the Arts event, Turner will conduct the first composition inspired by, written for and performed with Google Glass—the public premiere of the piece she commissioned from Kevin Ernste, a former colleague at Cornell University.

“The idea of wearable technology and virtual reality is really compelling these days,” Turner said. “I think we have to pay attention to that.”

Turner became a beta tester for Google Glass a year ago, after winning a contest on Twitter to complete the hashtag #ifIhadGlass. The professor of conducting completed the sentence with “I would live video feed concerts from the conductor’s point of view” and “I would wear it in conducting lab to give immediate feedback to students,” which resonated with Google and allowed her to become one of the first 8,000 people to try out the technology.

Funded by a Consortium of College and University Media Centers grant, Turner has been working with graduate student Tyler Ehrlich to create music applications for the Google Glass.

A metronome app has been extremely successful, Turner said, mentioning that the speaker behind the ear creates a vibration that helps “feel” the beat.

“When you are teaching conductors about getting the beat in your body, it’s one thing to hear it and it’s another to feel it,” she said.

A reverse metronome—where Glass would determine a tempo based on taps to the CPU—is in the works.

Glass’ video component has been successful, especially in the conducting lab, although Turner noted that the live feed during a concert didn’t work perfectly because of a slight delay between the music and the picture.

“Best teacher ever,” she said of the importance of video in learning to conduct. “I can go up to a student to make adjustments to their wrists and shoulders, and they see that from my point of view (through the Glass video). They see it up close and personal from the teacher’s perspective. It’s very helpful.”

Ehrlich, who is in Turner’s conducting graduate seminar, said the video helps him learn. “It’s almost like Dr. Turner exists on your computer screen,” while you watch the video. “You can see your problem in action.”

Another student, Jack Eaddy, said he was surprised to find that level of technology in the classroom. “To get that experience with her, especially while she is in the test phase, and learning from her with it, I’m so excited,” he said. “It’s awesome.”

An idea to place a musical score on the Google Glass prism (screen) has not gone as smoothly, although Turner said she is not giving up on the idea.

“That’s the beauty of research, that you get the idea and you try it out and it may not work,” she said, adding that the idea is to free the conductor from looking down at a music stand. “You can look through the music at the musicians. It sounds like a really cool idea, but in fact, when the full score is there, you get ‘the Glass look.’ You are looking up (into the prism), which is just as annoying as looking down.”

But Turner and Ehrlich still are committed to finding a solution.

“I’ve always liked the idea of limitations freeing you up,” she said of adapting to the small screen and other idiosyncrasies. “It’s counterintuitive, but in fact limitations can free you up to think differently, and that’s what happened.”

Now, the pair are working on what they call a “salient score” app, which would remind the conductor of key information but would not contain the entire musical score.

For “Adwords/Edward,” the piece Ernste composed for Glass, the small score does work well with the prism, Turner said, adding that a winking app allows for the one page turn.

“Musically speaking, it’s modern; it speaks to technology; it has a cool groove; it’s really hip. It’s an interesting genre-bender. I like music that does that. Is it pop music? Is it serious modern so-called classical music? Do those pillars of genres matter anymore?” Turner said, describing the composition written for bass clarinet, piano and drums, with an electronic component and vocals. “It’s still classical music in the sense that it is minimalist, but it also has this kind of neat groove. And it has a message.”

“Adwords/Edward” is dedicated to Edward Snowden, who is heralded by some and vilified by others for leaking classified information from the National Security Agency about online intelligence surveillance.

“This is a piece for our time that speaks to the concept of privacy. Is privacy an outdated concept now? I don’t know,” Turner said. “Every time we put Google Glass on, is Google listening? Yes. Every time you do a search with Google, are they listening? Yes. Are they taking our data? Yes. We are in very interesting, scary, provocative times, and that is what this piece is about.”

The Spotlight on the Arts event, which will include discussion of Turner’s Google Glass lab, is scheduled for Nov. 12 at 3:30 p.m. at the Georgia Museum of Art.