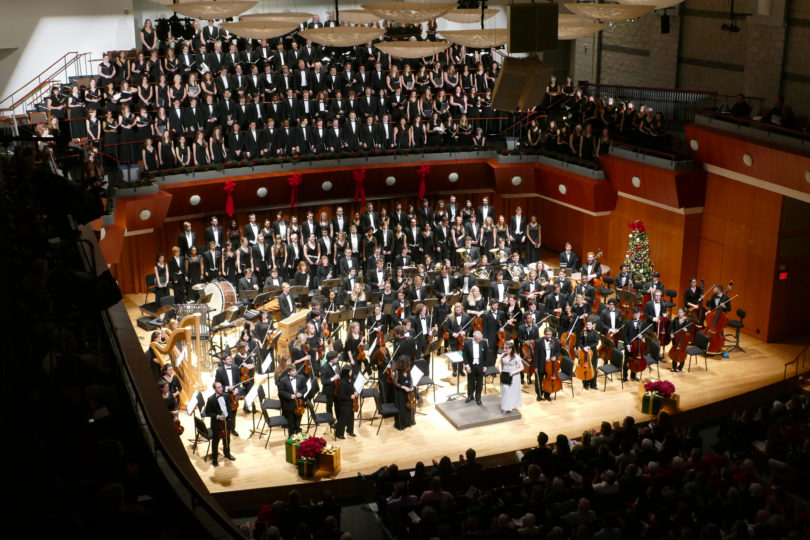 Get into the holiday spirit with an evening of music that celebrates the season with a program of sacred and secular music.

The University of Georgia’s Hugh Hodgson School of Music’s annual holiday concert will take place Nov. 29 and Nov. 30 at 7:30 p.m. on the Hodgson Hall stage. Audiences will be able to enjoy the talents of hundreds of singers and instrumentalists from the choral and large ensembles of the School of Music.

“The sheer size and scope of the performing forces make this concert special. That the concert comes at the end of the semester as the holidays approach makes it particularly fun for such a collaboration for our students and faculty,” said Daniel Bara, the John D. Boyd UGA Foundation Professor of Choral Music and director of choral activities.

The repertoire for the performance includes the “Act II Pas de Deux” from Tchaikovsky’s Nutcracker, movements from John Rutter’s Magnificat as well as a performance of “Bless Us All” from The Muppet Christmas Carol. Under the baton of Smith, bandmaster and the William F. and Pamela P. Prokasy Professor in the Arts, the British Brass Band will perform an audience sing-a-long of “I’ll Be Home for Christmas.” The evening will close with a combined choral and orchestral arrangement by Gary Fry that features singing in Swahili and Spanish, as well as an arrangement of the perennial holiday favorite, “O Holy Night.”

As part of the Thursday Scholarship Series, the proceeds from this concert go toward scholarships to young musicians.

Tickets, which are $25 for adults and $6 for students and children, can be purchased online at pac.uga.edu or by calling the Performing Arts Center box office at 706-542-4400. For those unable to attend the concert, live streaming will be available online at music.uga.edu/live-streaming.