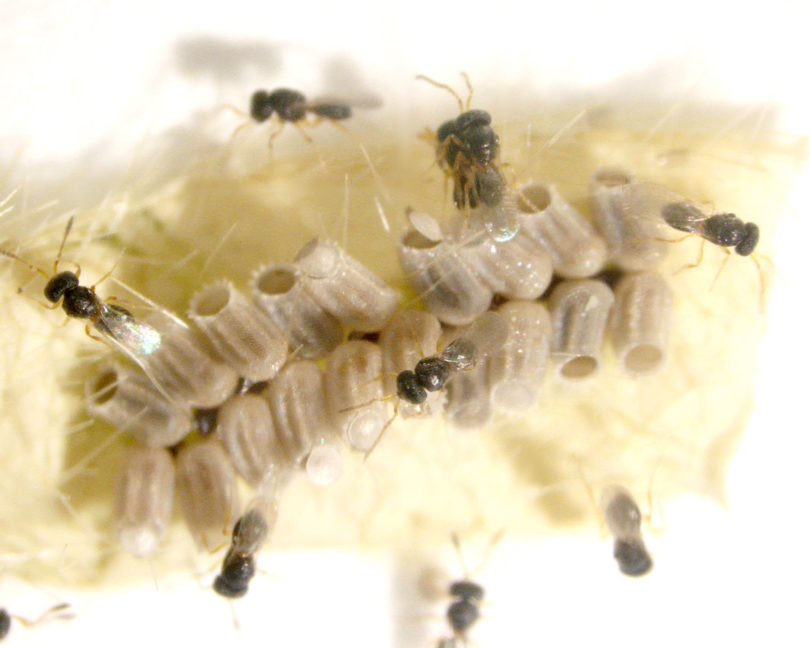 Tifton, Ga. – University of Georgia researcher John Ruberson is looking for natural enemies of the kudzu bug in an effort to fight the pest’s spread across the Southern states. A tiny Asian wasp may be the best option.

The kudzu bug was first spotted in Georgia in the fall of 2009. It feeds on kudzu, soybeans and other legumes and has become a nuisance to homeowners and a threat to international trade as an agricultural contaminant.

This summer—in collaboration with colleagues Walker Jones of the USDA-Agricultural Research Service in Stoneville, Miss., and Jeremy Greene of Clemson University—Ruberson plans to test the effectiveness of an egg parasitoid as a kudzu bug control method.

A parasitoid is an organism that spends the immature portion of its life attached to or within a single host organism causing the host to die. Ruberson’s parasitoid of choice is Paratelenomus saccharalis, a tiny wasp no larger than the period at the end of this sentence. The wasp lays its own egg in each kudzu bug egg, and the developing wasp larva destroys the kudzu bug egg as it develops. And, the wasp doesn’t sting humans.

“Using classical biological control is an option in the tool kit,” said Ruberson, an entomologist in the UGA College of Agricultural and Environmental Sciences. “There are several known parasitoids, one pathogen from India and one predator from Pakistan that are all natural enemies of the kudzu bug.”

UGA scientists know very little about the predator and the pathogen, Ruberson said. They are working closely with Keiji Takasu of Kyushu University in Fukuoka, Japan, who has extensive knowledge of the wasp.

“We have to demonstrate the safety of the organism before it can be released,” he said. “We want to make sure it’s a safe release so it doesn’t mess up the ecosystem.”

Ruberson and his colleagues are applying for a USDA permit for parasitoid release and will follow the required steps to ensure the wasp isn’t a danger to native insects and pests.
UGA researchers are still searching for natural kudzu bug enemies that are native to Georgia and the Southeast.

“We haven’t found any egg parasites in the past two years in Georgia on kudzu or soybean,” Ruberson said. “We have found some chewed kudzu bug eggs that have been damaged by something. We just don’t know by what yet.”

He offered common predators a meal of 10 kudzu bug nymphs and observed their dining habits. Two predator species ate all the nymphs, and the rest ate 20 to 30 percent of the nymphs.
“Lady beetle larvae ate quite a few, but the adults weren’t interested,” Ruberson said. “We do have some native predators that like to eat the nymphs, but we need to find out what they will do in the field. These species are all generalists—they may move back and forth between types of insects and not provide consistent control.”