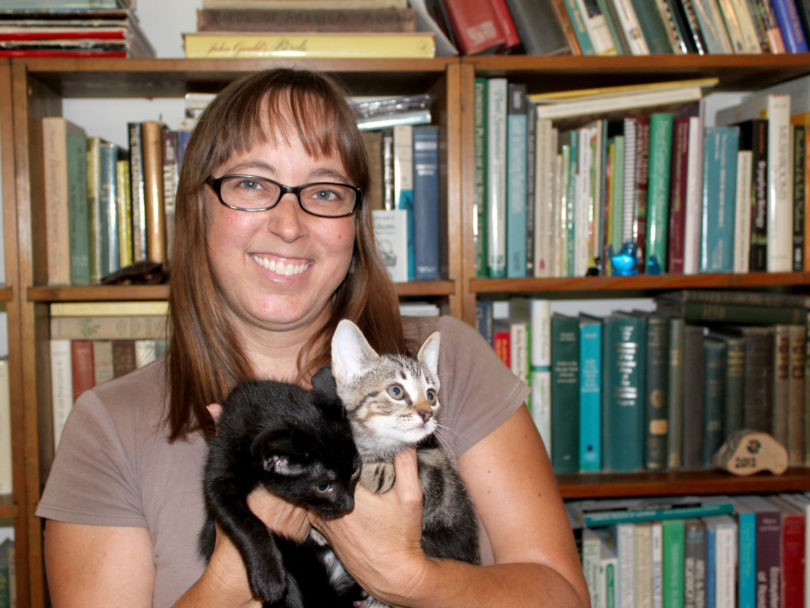 While Athens unofficially may be "Bulldog country

In November 2005, Bettinger, a research professional in plant biology, got an email about kittens running around outside near the main library. With her background in wildlife biology and knowledge of animals and traps, she decided she’d simply trap and spay the mother cat, catch the kittens and find them homes. End of story.

But when she later advertised the library kittens for adoption, reports from faculty and staff caring for feral cats around campus began to trickle in.

“I stumbled across a need on campus,” Bettinger said. “I could fill it. So I did.”

Bettinger began to coordinate the efforts of cat lovers from across campus to humanely manage the feral community cat population at UGA. That was the beginnings of what would become Campus Cats, or Cat Zip Alliance, which was officially incorporated in 2007.

Campus Cats is one of the organizations supported by the university’s annual Campaign for Charities, which ends Dec. 14.

The group uses a method called “trap, neuter, return, monitor” with healthy but unadoptable feral adult cats on campus. All other cats and kittens are removed from campus. Cats under a year old are either socialized for adoption or are found jobs as mousers in barns. All cats are fully vetted.

Over the years, Campus Cats has attended to just over 700 cats from projects both on and off campus. More than 400 of those cats were adopted.

Is the feral cat problem getting better?

“When we first started, people often complained about cats in dumpsters,” she said. “There was a dumpster in graduate and family housing where we trapped 21 kittens. We were able to remove all the kittens for adoption and spay and neuter the adults. We now pretty much have things under control at UGA, and there has not been a report of dumpster-diving cats since.”

The secret to the group’s success, Bettinger said, is that neutering ensures the cats aren’t breeding anymore, and daily monitoring by caregivers at feeding time lets them keep on top of things.

“All the cats are neutered, vaccinated and their ears are tipped so you know if it’s one we’ve already done,” she said.

In total, UGA has just 35 to 45 feral cats still living on main campus, including Raz, Minerva, Bulldog and Mr. FeedMeNow.

“They’re healthier and happier,” Bettinger said. “They’re no longer dumpster diving and getting into trouble.”

Once the males are fixed, they stop fighting and start making friends.

After two campus cats, named Bert and Ernie, that lived near Boyd Graduate Studies Research Center were neutered, they became fast friends—even lazing around in the sun together. They were actually getting too visible, so Bettinger relocated the now rotund cats to a permanent enclosure built in a volunteer’s backyard.

Campus Cats uses permanent enclosures for cats that can’t stay on campus but are considered unadoptable and too territorial to successfully adapt to a farm home. This includes older cats who need to retire from campus life, like the elderly Fergie, formerly from East Campus, whose eyesight seems to be failing.

Campus Cats now has three permanent enclosures housing 16 cats at volunteers’ houses and is raising funds for a fourth. On Saturdays, the group sells homemade dog biscuits and cat toys at the Athens Farmers Market. On home football game days, the group operates concession stand No. 303 at Sanford Stadium to raise money.

Funds are used primarily for vet bills for spaying and neutering cats, but also for caring for the existing cats on campus.

While Athens unofficially may be “Bulldog country,” Bettinger is making sure the cats also are being taken care of.

“It’s all my grandfather’s fault for telling me those stories,” Bettinger said.