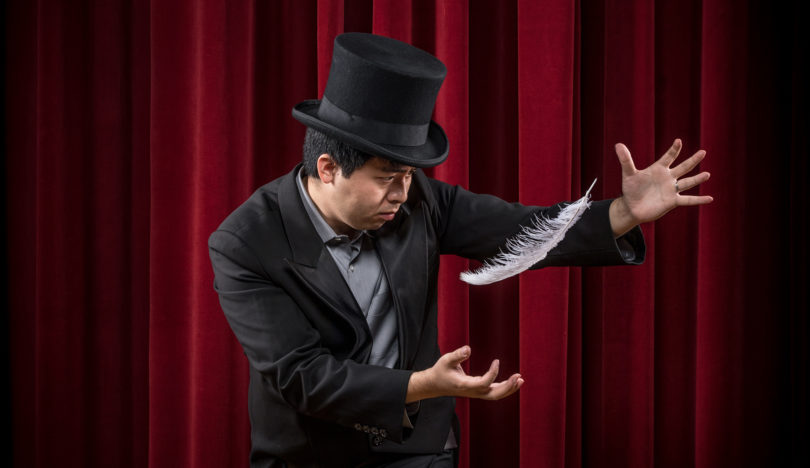 He reaches into his bag of tricks to illustrate complex concepts

“What is the magic to making science learning meaningful and engaging?”

That question is at the heart of University of Georgia doctoral student Tong Li’s research and teaching.

Li, who grew up Shandong, China, became interested in magic about a decade ago. A friend showed him a card trick where he made a card vanish. Li was fascinated and spent a few days practicing to replicate the trick.

“It wasn’t easy at all. It took a lot of practice. I tried to figure out how did the magician do that.” 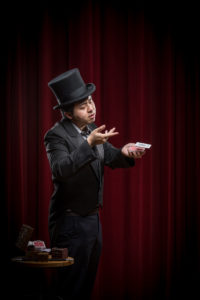 “Sometimes, you have to think about the possible. What seems impossible becomes possible,” said Tong Li, a fourth-year doctoral student in the Department of Career and Information Studies. (Photo by Nancy Evelyn/UGA)

After a few days, the friend revealed how he did the trick, and Li was hooked. “I realized that’s what made magic special—trying to figure out how the magician did that.”

He started learning magic tricks—coin tricks and magic with small props he often makes himself.

And in 2013, his hobby and his career intertwined.

In 2013, he did a study abroad program through Central Connecticut State University. There, he worked a teaching assistant at an elementary school where teacher was teaching gravity. Using his magic skills, he simulated an environment without gravity by suspending a table in the air. “The students were immediately engaged. They asked a lot of questions about gravity.”

After his stint in Connecticut, he knew he wanted to come back to America. Specifically, he wanted to attend UGA, as the College of Education’s learning, design, and technology program is internationally renowned.

He earned a Master in Education Technology degree from Shandong Normal University in Jinan, China, and in 2015, he started working on his Ph.D. at UGA.

Initially, he showed his research plan to his professors, and they seemed pretty interested and encouraged him to come to UGA. 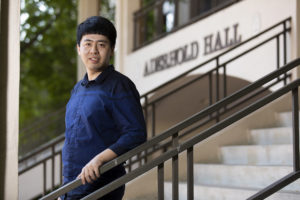 Tong Li is a doctoral student in the department of career and information studies in the College of Education. (Photo by Andrew Davis Tucker/UGA)

His dissertation is on “Using Magic and Performance as a Way to Facilitate Creative Design Thinking.” He recently defended his prospectus and is working on the data collection now.

His program gives him an amount of freedom and flexibility that he didn’t have before. “We have a very supportive environment, very open. My professors are very encouraging.”

He teaches a design course called Technology for Innovation in the Workplace, and his students are supposed to design an app. The class is focused on teaching students design-thinking, creativity and entrepreneurship. 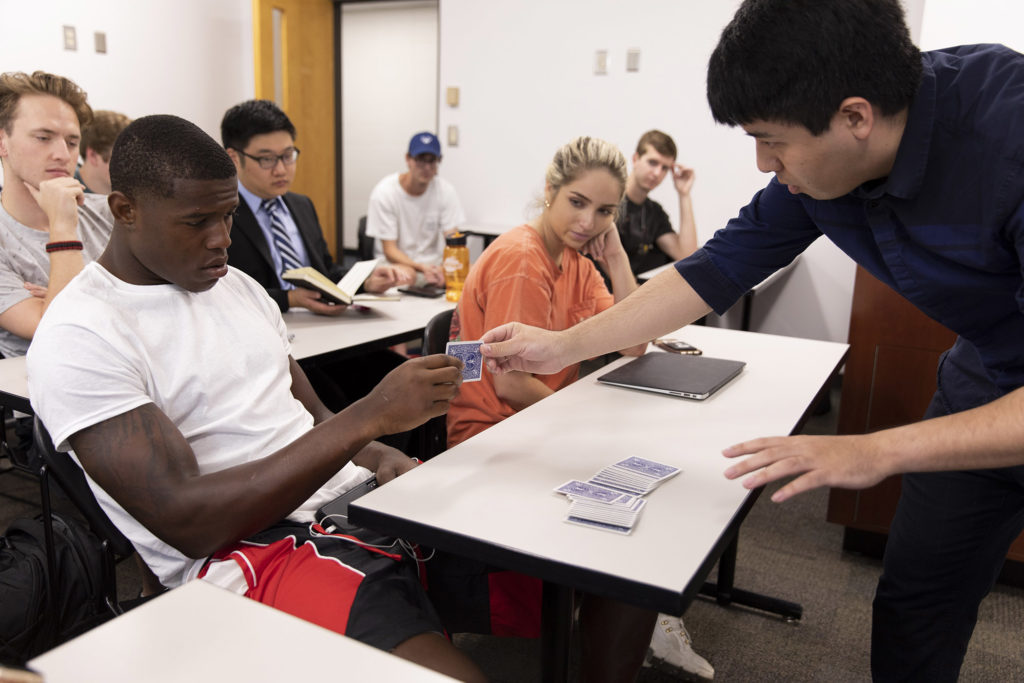 Undergraduates Otis Reese (left) and Taylor Ford (right) watch on as graduate student Tong Li performs a magic trick with a deck of cards while he teaches students in his Design Thinking Process class inside Aderhold Hall. (Photo by Andrew Davis Tucker/UGA)

“I use magic tricks as a way to inspire students to learn how to think outside of the box, how magicians create amazing and touching moments for their audience and how to incorporate the principles of magic into their design process,” he said. “It encourages them to be creative and make the impossible things possible.”

Similarly in college, he tries to break down complex science with magic. “Some science is so hard to explain. In the quantum world, there are a lot of things we don’t know about, and maybe I can use magic tricks to demonstrate,” he said.

Last year, he won first place in the graduate category UGA’s Capturing Science Contest. In his video submission, Li, who received $500 from winning the competition, uses magic and illusion to explain quantum concepts like entanglement and teleportation.

“Quantum entanglement is a relationship between two particles,” Li said in his submission. “If we say that two particles are entangled, what that means is that any changes to one particle will influence another paired particle. Something like this…” Li moves a foam ball back and forth on a table while a second ball follows without the help of his hand—a visual demonstration of entanglement.

He still likes to perform magic when he can and posts videos to his YouTube channel.

He performed at Family Day at the Special Collections Libraries earlier this year, where he taught children magic tricks.

He plans to finish his Ph.D. in 2020 and is open to opportunities, including being a professor. One day, after he’s established himself in his career, he’d like to bring magic back to China. Read more about Lin in the Graduate School Magazine.