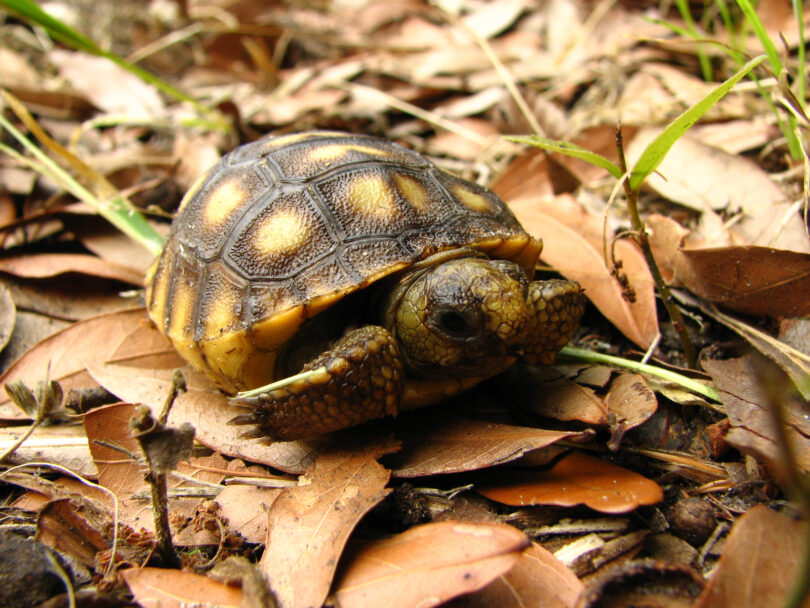 A hatchling gopher tortoise can easily be camouflaged by the fall leaves. (Submitted photo)

A rare study shows how one of Georgia’s barrier islands provides a safe haven for gopher tortoises and gives researchers at the University of Georgia evidence to prove species relocation is an effective conservation tool.

Georgia’s state reptile is one of the most threatened vertebrates. Numerous causes include annual low reproduction rates, habitat lost to development, and a vulnerable size prior to maturity that can render the species at risk for predation and roadside ruin. 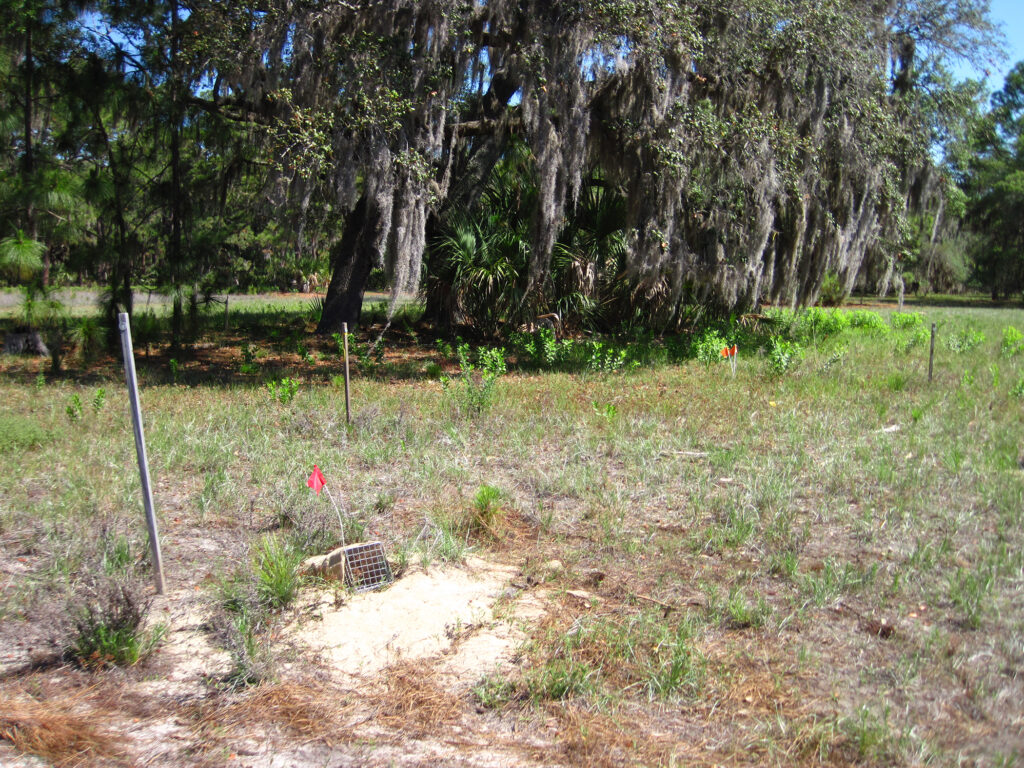 A wire cage trap sits at the entrance of a burrow. A former cattle pasture on the island provides the ideal habitat. (Submitted photo)

The study was conducted on St. Catherines Island, a private, 23-square-mile island south of Savannah, Georgia, and is the first long-term data captured on immature tortoises in a translocated or relocated population. The results revealed a survival rate of close to 40% for hatchlings, 70% for juveniles and 80% for subadults (similar to a teenager — almost adult size but not sexually mature).

Tracey Tuberville, a senior research scientist at the Savannah River Ecology Laboratory and adjunct faculty at the Warnell School of Forestry and Natural Resources, said the tortoises’ ability to reproduce and survive are indicators of a viable population.

“Rarely do we study a population long enough to determine if animals produce offspring and get recruited into the population successfully,” she said. “We wanted to know annual survivorship for tortoises. This study is one of the few estimates of survival of what researchers refer to as the missing years.” 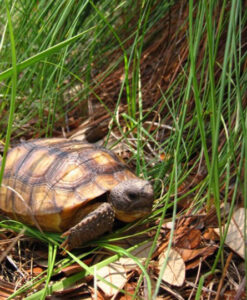 The study reports a tortoise’s age or maturity is determined by the size of its carapace or shell: hatchlings are less than 68 millimeters, juveniles are between 68 and 130 mm and subadults range from 130 to 200 mm.

The eight-year study used mark-recapture data to assess the sustainability of the population by recapturing and monitoring offspring born to mothers who were relocated to the island.

Terry M. Norton, director and veterinarian of the Jekyll Island Authority’s Georgia Sea Turtle Center, was the official veterinarian on St. Catherines Island when the first population of marked tortoises arrived. Tortoises are not native to the island, he said.

“The first Georgia Department of Natural Resources-permitted relocation from a development site released 74 tortoises on the island in 1994,” Norton said. “Prior to this, about 20 to 30 tortoises were released by staff on the island, but no data was captured on relocated tortoises prior to the GDNR release.”

Tuberville said this mostly adult population became known as the founders. She had the task of marking the unmarked founders and the free-ranging offspring, known as the wild recruits, as she released and recaptured two new cohorts of offspring.

These new recruits or hatchlings originated from eggs collected from the pregnant, or gravid, female tortoises. They were separated into two groups. 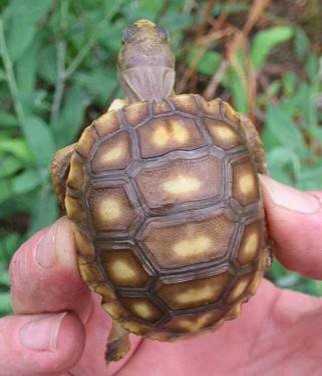 Tiny notches on the top right of this shell mark the tortoise and help to identify it when captured. (Submitted photo)

According to the findings, reported in the Journal of Wildlife Management, the method of release did not influence the tortoises’ chance of survival.

Norton, whose specialty is wildlife and zoo medicine, said bringing all classes of a population, not just adults, is essential to successfully relocating a population, as well as conducting long-term monitoring after the relocation.

“The planted grasses provide good nutrition, and the limited number of humans on the island makes a significant difference for the species.”

Tuberville said immature tortoises can be difficult to locate due to their small size and “cryptic nature,” but the low shrubbery on the island made it easy to spot burrows. Previous research documented 800 burrows on the island.

A total of 473 captures resulted in the documentation of 284 immature tortoises during the study.

Find out more about the tortoises on the island, including their predators, at  https://wildlife.onlinelibrary.wiley.com/doi/full/10.1002/jwmg.21933

Co-authors on the study include Rebecca K. McKee and Heather E. Gaya, University of Georgia Warnell School of Forestry and Natural Resources.