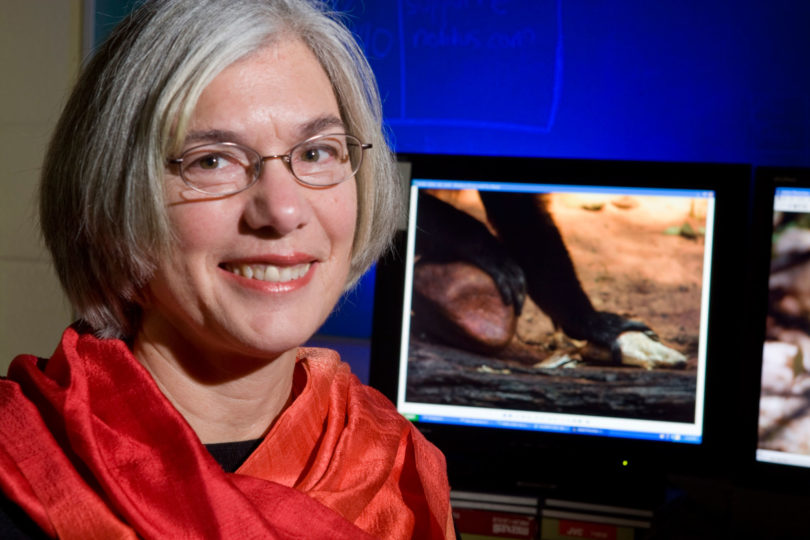 A team of researchers led by UGA psychologist Dorothy Fragaszy this past fall published the first direct scientific report of tool use among a population of wild capuchin monkeys. There have been reports of single instances of this behavior but never of a whole population using tools routinely over a long period of time.

Using heavy stones, possibly transported for this purpose to an “anvil” site in northeastern Brazil, these cat-sized monkeys routinely crack palm nuts, which grow in clusters close to the ground. Though this nut-cracking behavior has been common knowledge among local residents for years, this is the first scientific report to confirm a behavior previously studied only in wild populations of ­chimpanzees.

The study was published in the American Journal of Primatology. Co-authors are Patricia Izar and Eduardo Ottoni of the University of São Paulo, Elizabetta Visalberghi of the Consiglio Nazionale delle Ricerche in Rome, and Marino Gomes de Oliveira of the Fundacão BioBrasil in Bahia, Brazil.

“One of the most significant things about this research is that we see the behavior in an entire population and not in isolated individuals,” says Fragaszy, who is considered one of the world’s top experts on capuchin monkeys. “Also, it is the first time this behavior has been observed in wild capuchins.”

Another study, published in the journal Science at about the same time, also reports more generalized tool use among capuchins, in a different area of Brazil.

Fragaszy and her colleagues first saw evidence of tool use for nut-­cracking among Brazilian capuchins in a photo essay published in the February 2003 issue of BBC Wildlife magazine. The dramatic pictures showed the monkeys lifting improbably large stones to crack palm nuts, which had been put in scoured “anvil” areas that indicated long-term use. Fragaszy traveled to the area in Brazil where the photographs were taken, not quite sure what to expect. She soon she saw, from a blind built in front of a nut-cracking site, monkeys coming to break open nuts with huge stones.

The study adds important new information to increasing knowledge that human beings are not the only primates who use tools. At one time, the use of tools was considered an important difference between humans and other primates, but scientists some time ago discovered that chimpanzees in the wild use tools in several ways.

“What we found is that these capuchins are extremely skilled weightlifters,” says Fragaszy. “The video we took of them cracking stones shows just how remarkable their ability to lift these stones has become.”

A number of puzzles remain, and Fragaszy hopes to understand them better after return visits to the site. First of all, some of the cracking stones are large, water-smoothed rocks, which aren’t found in the immediate area. Where do they come from? Have the monkeys transported them over a very long time?

Just as perplexing is a high rocky ridge nearby, on top of which are several anvil sites and the remains of hundreds of cracked palm nuts. Just how the small monkeys managed to lug the heavy stones to the top remains a mystery.

There are, in fact, many such ridges in the area with anvil sites.

The site is a biological reserve operated by the Fundacão BioBrasil in a dry woodland habitat in northeastern Brazil. While it has become an ecotourism site for its healthy and often remarkable bird population, the discovery of tool-using capuchins at the site, which is more than an hour’s drive on poor roads from the nearest town, adds a new layer of scientific richness to the area.

Interestingly, the researchers observed monkeys using two forms of action to crack nuts. In one, the monkey sat or stood bipedally, held the stone in both hands and raised and lowered the stone with arm and shoulder movements. A more strenuous method involves a monkey rising quickly to a nearly vertical position by standing explosively and raising the stone to shoulder height before crashing it down on the nut.