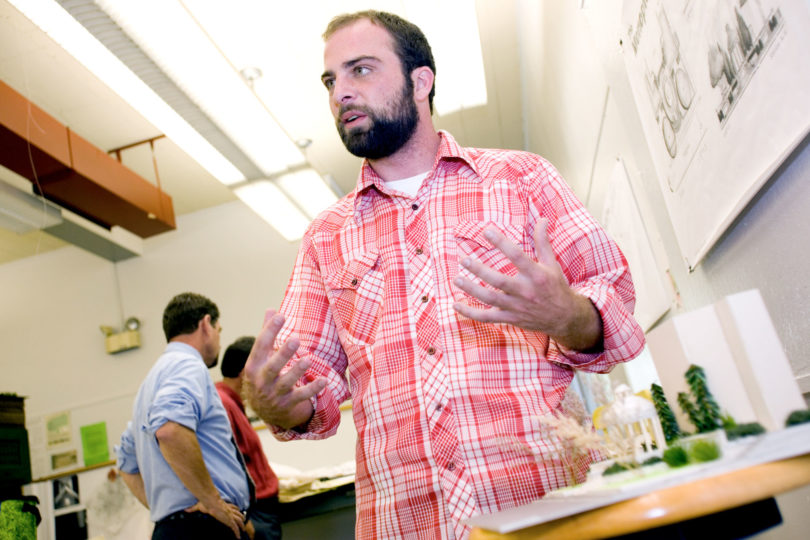 The Chapel bell is a familiar landmark on North ­Campus-almost.

“Everybody remembers the bell tower, but if you ask them to describe the space around it, nobody remembers that,” said Brian LaHaie, a professor in the School of Environmental Design.

As LaHaie’s graduate students pointed out recently, that might be a good thing. The bell is tacked on the Chapel’s backside, just a few feet away from a drop-off to a sidewalk running along Herty Street, where big trees block the landmark from sight.

“I think the problem the students have identified is that this is an under appreciated part of the campus that really deserves something more,” he said while pouring over a design by Christine Donhardt.

For her project, Donhardt envisioned a walkway lined with Elberton granite spilling forward to Herty Street. She said she wanted to make an area that would be used by students.

“It needs to be a place accessible to studying. People should enjoy it,” she said.

The students’ designs varied widely, from creating a complete pedestrian thoroughfare on Herty Street to giving the bell tower itself a makeover.

In Nick Petty’s design, the bell is housed in a Roman domed hut called a monopteros. The formal design would fit the reverential nature of the bell and discourage “abuse” like repeated game day ringings, he said.

“The president could address the media here, or students could gather to protest here or meet. This is the nicest part of campus, the place we want people to see. This could be an asset,” he said.