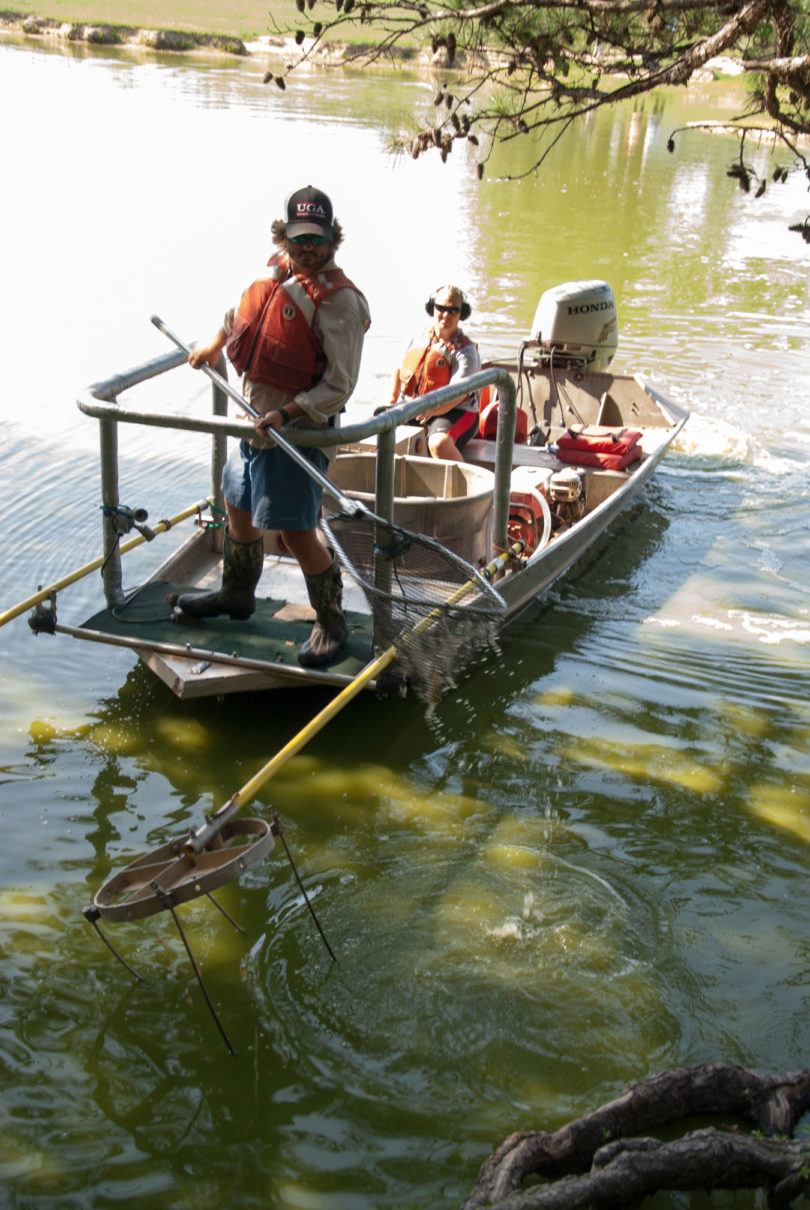 Athens, Ga. – University of Georgia researchers have determined that toxic algae killed four cows on a cattle farm in Gwinnett County. A recent perfect storm created the right conditions for a toxic algae bloom in ponds, they say, warning property owners to be vigilant about keeping livestock and pets out of water that has become discolored or opaque.

The toxic algae has been found in at least one other pond less than 10 miles from Atkinson Farms in Dacula, and researchers say it is very possible these are not isolated incidents.

“Pond owners should be mindful of the risks associated with toxic algae and take proper management steps to prevent or lessen the formation of an algae bloom,” said Rebecca Haynie, a toxicologist with the UGA Warnell School of Forestry and Natural Resources. “However, there are numerous species of common algae in the Southeast that are capable of producing toxin. So just because you have a bloom doesn’t mean you have something toxic in the water.”

Haynie and other researchers have been working to clear up the algae bloom in cattle farmer Bill Atkinson’s pond, taking water and fish samples and treating the water with algicide. Algae are a naturally occurring phenomenon, Haynie said, and typically flare up and then clear on its own.

Atkinson’s pond is the worst-case scenario, resulting from a recent perfect storm of conditions. Warmer than average temperatures and drought leading to increased water clarity and an influx of nutrients from the surrounding pasture created ideal conditions for an algae bloom.

Unfortunately for Atkinson, the dominant species in the bloom was the toxin-producing species, microcystis. This blue-green algae, or cyanobacterium, is a potent liver toxin. Haynie said that when the Warnell team tested Atkinson’s water, the toxin level were so high they were out of test range. Her team has treated his pond with algicide twice to attempt to alleviate the bloom.

Color changes in a pond can be a clue to farmers or pond owners that a bloom has happened. Bright green water or water with a pea-soup-like surface scum should be avoided, and special care should be taken to keep pets and children away.

Pond owners who suspect their water is suffering from an algae bloom can purchase algicide products from their local feed supply stores, Haynie said, reminding pond owners to pay careful attention to the detailed labeling on these products, particularly because copper-based algicides can be harmful to aquatic organisms, including fish. Using these products will only treat the symptoms: Haynie urges pond owners to address the causes of the bloom.

A few easy steps pond owners can take to help prevent blooms are to leave vegetated buffers around the pond, limit livestock access and don’t over-fertilize the surrounding area. Atkinson completely fenced his cattle off from the pond and is pumping water to a trough to hopefully begin remedying the situation. Pond owners also can contact their local Cooperative Extension agent for more information.

“These toxins can be fatal if ingested in high quantities,” he said. “Diagnosis may be difficult because the symptoms may easily be mistaken for other disorders more commonly observed in cattle, so a thorough evaluation of the farm is essential to rule out other causes.”

Dr. Lee Jones with the UGA College of Veterinary Medicine said he has received other recent reports of livestock found dead near a shallow pond, and an algae bloom is the suspected cause. Toxin levels of blooms can vary, he said, and toxicity depends on the amount of water ingested. “There are three types of toxins: neural, liver (or hepatic) and a skin toxin that can cause a severe rash and itch.”

The liver toxins suspected of killing Atkinson’s cows, however “usually do not cause sudden death,” he said. “Sometimes the animal may have colic symptoms like abdominal cramps, excessive drooling, lose their appetite and be very lethargic.” Sometimes the effects are even delayed, Jones said, and animals won’t get sick for three to four weeks after drinking the contaminated water.

Jones recommends that pond owners also contact their veterinarian if they suspect an algae bloom has occurred and they have pets or livestock who drank from the water. Veterinarians can conduct a blood test to confirm liver damage, he said.

Atkinson said he has let his cattle graze in a pasture near the pond and drink the water for more than 40 years without any problems until May 5. That’s when his first heifer died. Losing one head of cattle is not unusual, he said, so they didn’t suspect trouble until a second one died on May 12. While he and his veterinarian investigated the cause, a third died on May 22. The fourth died on June 5. By then, they’d developed a strong suspicion the pond water was the culprit, and Atkinson moved his cattle away from the pasture and called Stewart at UGA.

Stewart referred Atkinson to Susan Wilde and Haynie at the Warnell School because of their work studying another deadly aquatic toxin that is likely killing American bald eagles who acquire avian vacuolar myelinopathy from the algae.
Atkinson said three other heifers have been exposed to the algae toxins; they have been sequestered and are being monitored. All of the cattle that have died or been exposed to the microcystin toxin are show cattle.

Pond owners can contact Wilde at swilde@uga.edu or Haynie at hayniers@uga.edu if they suspect a blue-green algae bloom.