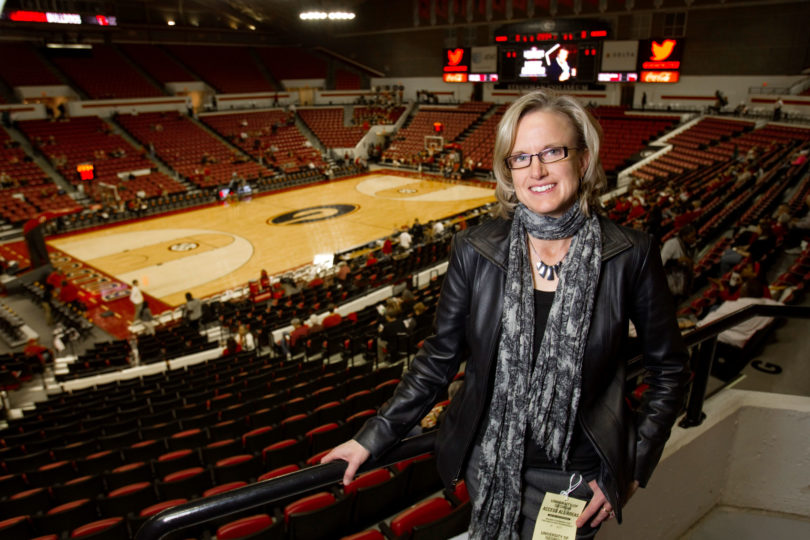 Vicki Michaelis, the first John Huland Carmical Distinguished Professor of Sports Journalism in Grady College, has witnessed and written about some of the greatest sports moments of the 21st century during her tenure as lead Olympics writer for USA Today.

Perhaps none was more impressive than watching Michael Phelps swim for a record eight gold medals in the Beijing National Aquatics Center in China in the 2008 Olympics.

“When you talk about drama, it doesn’t get any better than that,” she said.

Michaelis, who wrote her final Olympics story for USA Today after the games in London last summer, has traded the drama of international sports for academia.

Michaelis now teaches sports journalism courses in Grady College and is leading efforts to build a sports media initiative within the college.

“My broad vision,” she said, “is to make UGA the top destination for people who want to study sports media.”

While the program is just getting off the ground, Michaelis calls UGA ideal for training the next generation of sports reporters because of the strength of the university’s athletic program and nearby high school sports; its proximity to Atlanta, which offers access to professional sports and major media outlets; and because of UGA’s existing academic strengths in law, business and health.

Those opportunities inside and outside the classroom combined with existing strengths of Grady College will allow the incipient sports media program to equip aspiring sports reporters with the tools for an evolving field-one in which journalists need to know how to write, use social media and be comfortable behind and in front of a camera.

“We can be the university that puts these well-rounded sports journalists out there, so they can meet the skill requirements of a broad range of jobs,” she said.

Michaelis already is finding professional-level opportunities for students through the new GradySports bureau. The initiative is pairing students with local outlets such as the Athens Banner-Herald to cover high school sports.

GradySports also is partnering this semester with the Athletic Association and student-run radio station WUOG to give students the chance to do play-by-play and color analysis for selected UGA softball games.

Michaelis also plans to use her professional background to help send students through GradySports to cover future Olympics, including the 2016 Olympics in Rio de Janeiro, Brazil.

While getting press seats for premier Olympic events-not to mention the chance to cover a good share of NBA and NFL games-would be a sports fan’s dream, it may come as a surprise that Michaelis was not much of an avid sports fan when she took her first sports writing gig 20 years ago.

After earning her master’s degree in journalism from Northwestern University, Michaelis was working as a copy editor in south Florida when her first chance to switch to reporting was covering high schools sports.

“It wasn’t love at first sight, I’ll say that,” she said.

That began to change as she developed an appreciation for sports culture.

“Sports had all of the things that I really loved about writing and about reporting: the drama, the human element, the travel, meeting new people constantly,” she said. “I really began to like it after a couple of years.”

Michaelis went on to work for The Denver Post, where she covered the Denver Nuggets, the University of Colorado and eventually Olympic skiing. In 2000, Michaelis landed at USA Today, where she became the head Olympics writer.

Her decision to join UGA came out of a desire to improve the direction of sports media.

“Journalism is at a crossroads right now,” she said. “In this role I can have a lot bigger effect on where it ends up than I could have in my old role.”

In sports media, she said, the industry is trending away from sound journalistic practices. That’s true, she said, for “eyeball chasing” headlines overly focused on athletes’ personal lives and episodes where sports journalists failed to thoroughly investigate their subjects, such as the recent scandal with former Notre Dame football player Manti Te’o.

“Sports journalism (often) crosses the line into entertainment,” she said. “Here, I feel like I have the opportunity to shape some things and correct some things. I feel a real responsibility to make sure students are trained to know the difference.”