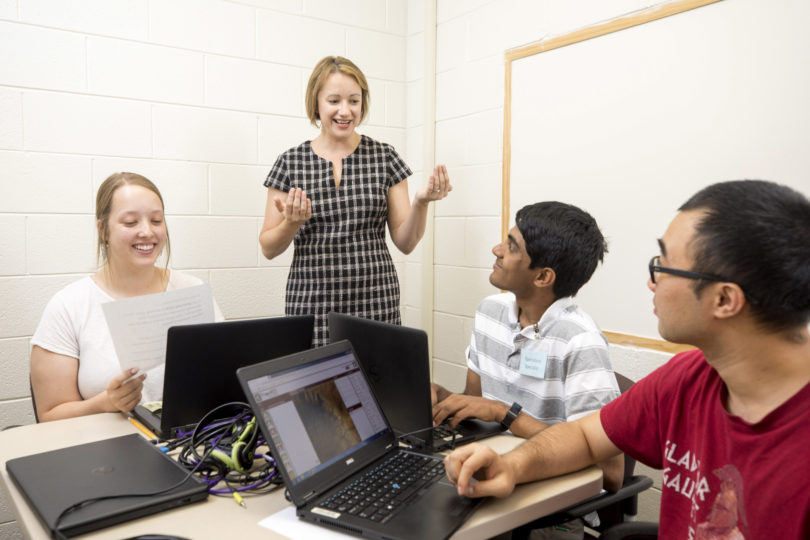 Fifty years ago, Neil Armstrong took “one small step for man, one giant leap for mankind” when the Apollo 11 mission put a team of two astronauts on the moon July 20, 1969.

NASA’s next giant leap will be sending humans to Mars, projected for the 2030s, and a University of Georgia researcher is partnering with the space agency to explore the challenges of such a mission.

Successful communication and collaboration among multiple teams will be an essential part of deep space travel, and this is Dorothy Carter’s expertise. An industrial and organizational psychologist at UGA, Carter specializes in teamwork and examines how multiple groups work together in pursuit of larger goals. 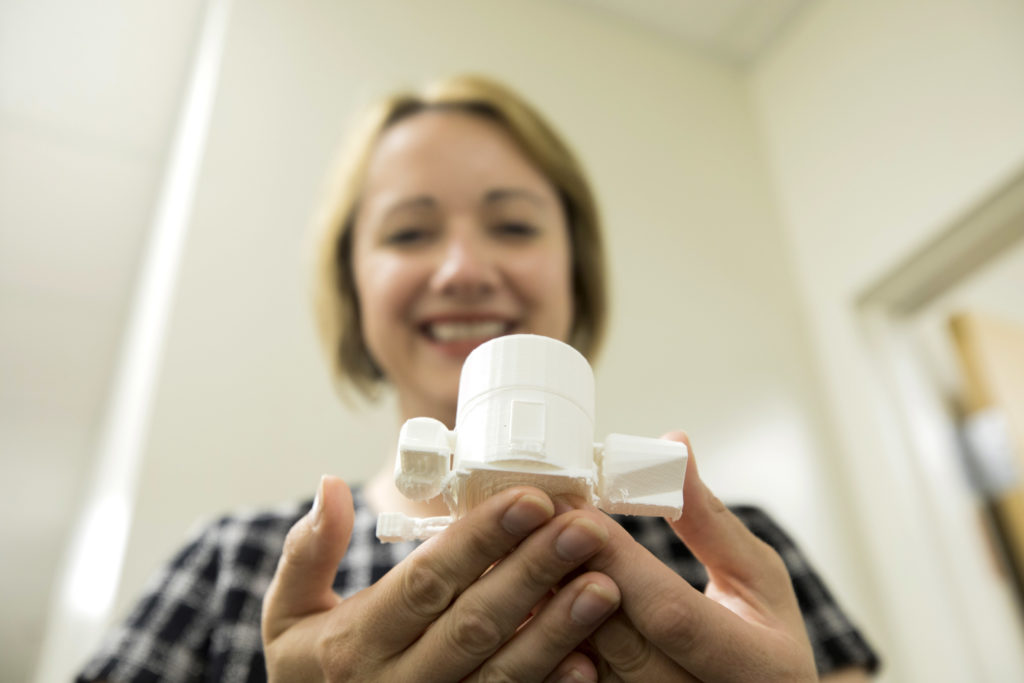 Dorothy Carter holds a 3D model of the capsule the NASA team is living in.

“I’m especially interested in understanding how large systems comprised of multiple teams from different areas of expertise work together effectively,” said Carter, assistant professor of psychology in the Franklin College of Arts and Sciences. “Breakdowns often occur when people with different perspectives try to collaborate, but collaboration across disciplines is essential in order to address many of the most important problems facing humanity.”

Carter is principal investigator on Project FUSION (Facilitating Unified Systems of Interdependent Organizational Networks), funded by a $1 million grant from the National Aeronautics and Space Administration.

Project FUSION aims to better understand how the spaceflight “multi-team systems” involved in a long-duration space exploration mission will need to function in order to send a team of humans to Mars successfully.

As part of Project FUSION, UGA students are volunteering to be part of an experiment where they team up with participants in NASA’s Human Exploration Research Analog to play a multiplayer computer game called Project RED that she co-designed that asks them to synthesize complex knowledge in order to build a simulated water well on the surface of Mars.

Since 2014, NASA’s HERA program has explored the effects of isolation, confinement and remote conditions—significant factors in a three-year journey to Mars—via teams that live in a space capsule at the Johnson Space Center in Houston. On May 24, a four-person team began a 45-day residency and has had little contact with the outside world other than mission control and once-weekly communications with family. The one exception is their sessions playing Project RED.

In every experimental session, each of the four HERA participants is teamed with two UGA undergraduate volunteers for Project RED.  Everyone was assigned a role—hydrogeologist or Martian terrain specialist, for example—and provided with role-based expertise. During the game, the four teams work together to come up with a plan for building the well.

The impact of delayed communication

Unlike communications with the International Space Station, which are nearly instantaneous, a Mars mission will involve up to a 20-minute communication delay each way. The crew will need to be prepared to handle a multitude of issues, including equipment failure and medical emergencies, on their own.

“We want to make sure that by the time someone says, ‘Houston, we have a problem,’ and the information gets back to Earth, it won’t be too late,” Carter said.

During a recent Project RED session, the teams had to factor in a three-minute delay in communications. That led to some “interesting dynamics,” according to UGA sophomore Jeffery John, who serves as operations specialist for the robotics team. 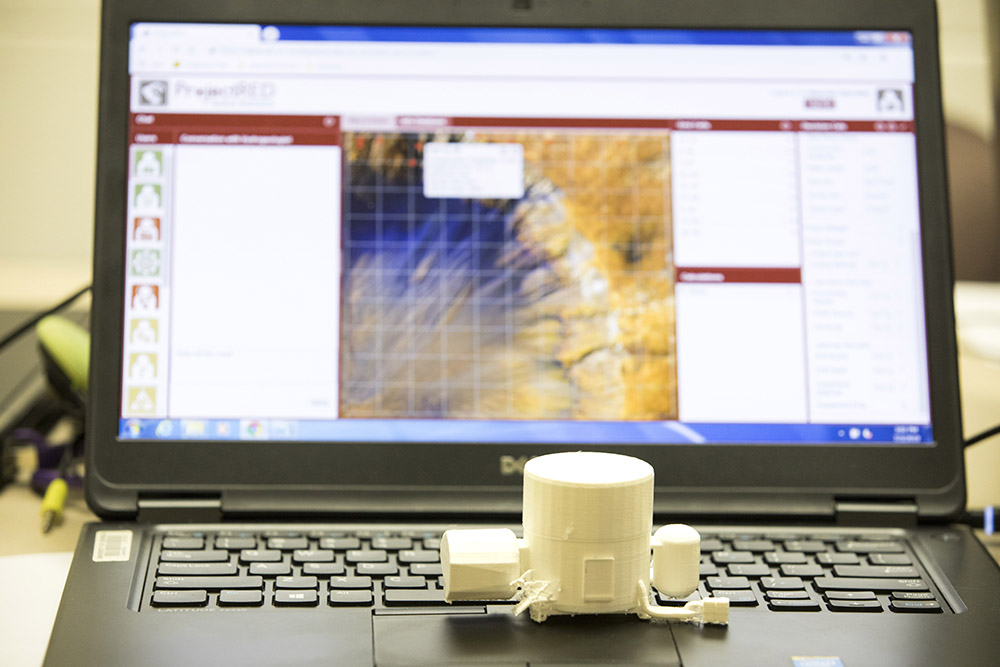 3D model of the NASA capsule with screenshot of Project RED.

“We started off this session saying, ‘We are going to find a location in the first 15 minutes.’ We did not find a location in the first 15 minutes,” he said, laughing. “When you think about it, that’s only five opportunities [factoring in the three-minute delay] to interact with a quarter of the team, and that really does not facilitate effective decision-making, especially when you’re relying on data that only they have.”

Over the course of the experiment, they’ve learned to identify the factors that prevent teams from reaching compromises, John said.

“I think a big part of this experimental process for me is realizing that it’s one thing to have the talent or the skill or the information and another thing to synthesize it in a meaningful way,” he said. “Because it doesn’t matter if the pump is perfect or the operations are perfect if there isn’t any water for the pump to get to.”

Finding problems before they happen

Carter and her collaborators are developing a countermeasure toolkit for NASA that facilitates teamwork in the context of the multiple groups that will work together to enable deep space travel. These groups include the crew, mission control and multiple space agencies, for example.

In addition to the Project RED laboratory experiments, Carter’s research team is conducting field studies involving analysis of archival documents, interviews with NASA personnel and observations of teams working with other teams. The team is also building a computer simulation based on the field and lab studies that will allow them to run repeated simulations with changing variables—gender breakdown or different expertise within the team, for example—very quickly. The computer simulations will allow Carter to identify potential critical situations and identify ways to rectify them before they happen.

“You can make predictions about system functioning to the best of your ability without having to collect years of human data,” she said.

In previous research, she examined how team goals juxtaposed against big-picture goals can affect a multi-team system. The natural human tendency, she found, is for team members to engage in behaviors that promote their fellow members and detract from the success of members of other groups.

“That’s especially true when the members of different teams are not focused on that bigger picture goal,” she said. “It’s easier for people to focus on their own individual outcomes or their team outcomes; it’s harder to focus and keep in mind that the bigger picture goal is something you should be working for. That’s just not something that we do naturally.”

Group boundaries that prevent intergroup collaboration are solidified even more when a complicated, uncertain or dangerous situation arises—and deep space travel will almost certainly have that component.

“When the system is unstable, it can be even more difficult to collaborate across boundaries,” Carter said. “But that’s the time when you need them to work together the most.”