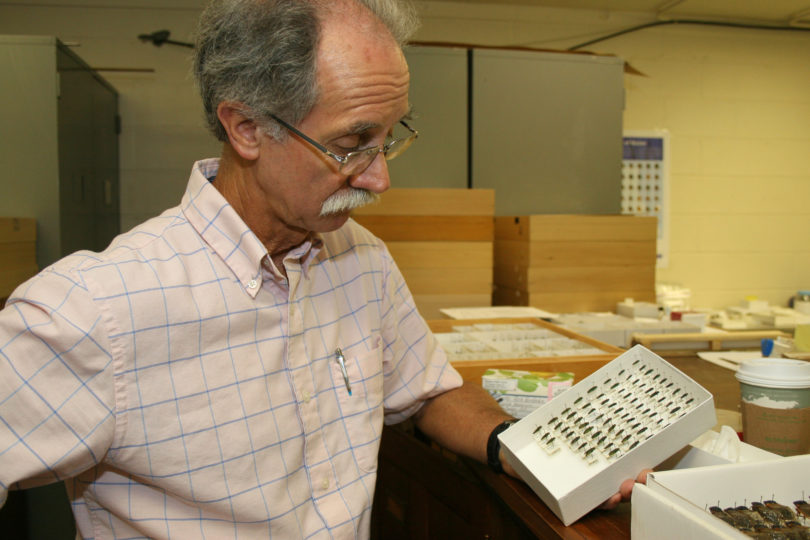 Athens, Ga. – For years, foresters and invasive insect experts—including those at the University of Georgia—have been on the lookout for the arrival of an unwelcome guest in Georgia. Now that the emerald ash borer is here, they are hoping the public will help restrict the insect’s spread within the state.

The small, iridescent green beetle has killed millions of ash trees across a wide swath of the upper Midwest and Canada since it was first detected in 2002. The emerald ash borer, known scientifically as the Agrilus planipennis, has spread south and west from infested areas over the last decade.

Since 2005, invasive species experts have conducted an extensive trapping program in Georgia to screen for the insect. In July of this year, researchers found adult emerald ash borers in survey traps located in DeKalb and Fulton counties. A follow-up ground survey found larvae in nearby ash trees, confirming an established emerald ash borer infestation was present.

The borer’s larvae kill ash trees by burrowing serpentine tunnels in the inner layers of bark, preventing the tree from transporting water and nutrients to and from the tree canopy. Although the adult beetle is an active flyer, it is believed the primary way this beetle spreads is by hitching a ride on infested ash firewood, logs and nursery stock.

“To prevent the spread of emerald ash borer, it is important not to move firewood in which the insect can hide,” said Kamal Gandhi, an associate professor in the UGA Warnell School of Forestry and Natural Resources. “Buy local firewood whether camping or for your home.”

Georgia’s five species of native ash trees usually grow along stream banks. While they only make up about 1 percent of the state’s forests, they play an integral role in preventing stream bank erosion and keeping silt out of natural waterways.

Ash also is a popular landscape tree, with 2.9 million planted around Georgia homes, businesses, parks and on public right-of-ways. The value of these city trees in Georgia is estimated to be around $725 million.

To help reduce the spread of emerald ash borer in Georgia, citizens with ash trees on their property should check or have a certified arborist check their trees for signs of borer infestations.

Suspected infestations should be reported immediately so that foresters or arborists can understand how the infestation is spreading and can develop effective methods to reduce its spread and impact.

“The faster scientists can track the spread of the insect, the faster they can work to stop it,” said Joe LaForest, the integrated pest management and forest health coordinator in the UGA Center for Invasive Species and Ecosystem Health.

For more information about the emerald ash borer and how to protect ash trees, see www.gainvasives.org/eab or watch the Outsmart Invasive Species Project video on emerald ash borers at http://www.youtube.com/watch?v=wXCynbvf4Lc.