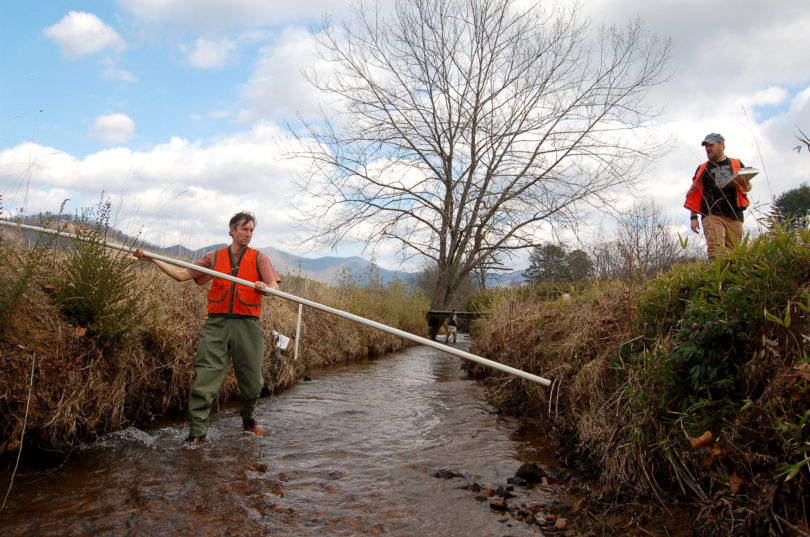 Researchers from UGA’s Warnell School of Forestry and Natural Resources found that where landowners cut down the forests that bordered streams—turning them into pastures or lawns—the structure and amount of aquatic habitat changes dramatically.

The study, published in River Research and Applications, looked at 49 streams in the Upper Little Tennessee River Basin in the southern Appalachians. It found that, without trees, the stream channel becomes narrower, and aquatic habitats are reduced by two-thirds in small fish-bearing streams.

Part of the Coweeta Long Term Ecological Research Project, their work showed that streams surrounded by forestlands provided more complex habitats and supported more diverse aquatic wildlife than those in the midst of pasture or grassland, said Rhett Jackson, lead researcher on the project and a professor in the Warnell School. Forested “riparian zones” are vital for providing woody debris that creates cover and complex habitats for aquatic animals like fish, salamanders and invertebrates.

“Trout and salamanders have adapted to cool, shaded and messy streams with lots of wood and nooks and crannies,” he said. “When you make that stream simple and warm, you favor fish that would normally dominate streams in the Piedmont, not in the mountains.”

Simply put, trees make better streams, a fact that’s not very surprising, Jackson said, since the aquatic wildlife in the southern Appalachians has adapted to forested conditions. Even those with just a single tree acting as a buffer were wider than streams with no trees at all.

Jackson said many of the floodplains in the study area had been deforested for at least a century, but there has been a movement to encourage reforesting the pastures and grasslands, called riparian buffer restoration.

And it would be very easy for landowners to do.

“They just need to quit mowing,” he said. “Trees will grow back on their own.”

But it might be an uphill battle to convince landowners to allow trees to grow back up around their streams. Some prevalent cultural beliefs among landowners have proven to impede reforestation efforts, Jackson said. Some believe they are improving stream quality by removing trees, as well as improving the aesthetics of the area.

However, others are promoting riparian restoration. The Mainspring Conservation Trust, for instance, has been planting trees along streams and encouraging landowners to do the same.