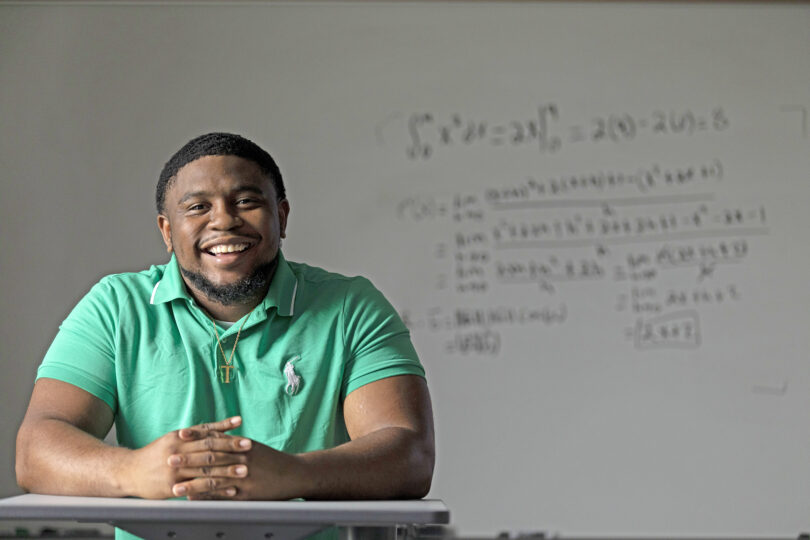 Future math educator explains his formula to succeeding at UGA

Trevyn Gray started out his school year at the University of Georgia volunteering at housing move-in.

“You will see me everywhere,” said Gray, a third-year education major from Americus. “I do everything. It keeps me busy.”

Gray, an aspiring math educator, volunteered because after months at home, he was more than ready to get back to campus—and to see his friends, who also volunteered.

Gray describes himself as very Type A and someone who genuinely likes to help others.

“I feel like if I’m not doing anything, I’m not being productive,” he said. “I take my relaxation seriously, but I also can’t have too much of it.”

He’s involved in UGA’s Black Male Leadership Society, where he serves on the executive board. Last year, he was co-community outreach chair. He volunteers with Young Black Kings, a program that mentors 10-12 young men at Clarke County Middle School. Once a week, they mentor the students, teach them about professionalism, financial literacy and character. He’s an ambassador with Georgia Daze, a minority recruitment event at UGA. He’s also just been named an ambassador for the Mary Frances Early College of Education, where he’ll give tours as well as work convocation, orientation office hours and First Fridays and be available to talk to prospective students.

I think about risks a lot. If this is going to hurt me, I’d rather not do it. But a lot of things you see me do—high reward, low risk. My motto is, ‘Go for it. Why not?’ If there’s no good answer for why not, I’m going to do it.” —Trevyn Gray

Gray was originally drawn to UGA after a Future Business Leaders of America trip his sophomore year in high school. A teacher showed him around campus, and it was love at first sight.

“Wow, it’s beautiful, I love this,” he said of the campus, which really impressed him. He did his research and learned about the rankings, the people, the culture and football. “UGA is an amazing school. It’s prestigious. It has a lot of people. I learned about the 24-hour dining hall. I gotta have that. Why wouldn’t I go to UGA?”

But Gray had a small detour. While he was admitted to UGA, his admission was for the spring semester, not fall. For his first semester of college, he took classes at Georgia Southwestern State University in Americus before officially becoming a Bulldog in spring 2019.

Gray always knew he wanted to be a teacher. He loves math and was captain of the math team in high school. When other students kept asking him for math help, he realized that he was really good at explaining the concepts. “It just came together,” he said.

He also had inspirational high school math teachers. “Most math classrooms feel very bland, mundane. It feels the same, how teachers teach. Present, do problems and that’s it. With Dr. N (David Ndaayezwi), it was a more fun experience. We joked around. We had fun in the classroom. We moved around a lot more. It was more fluid. He was open to critique. It just felt different. 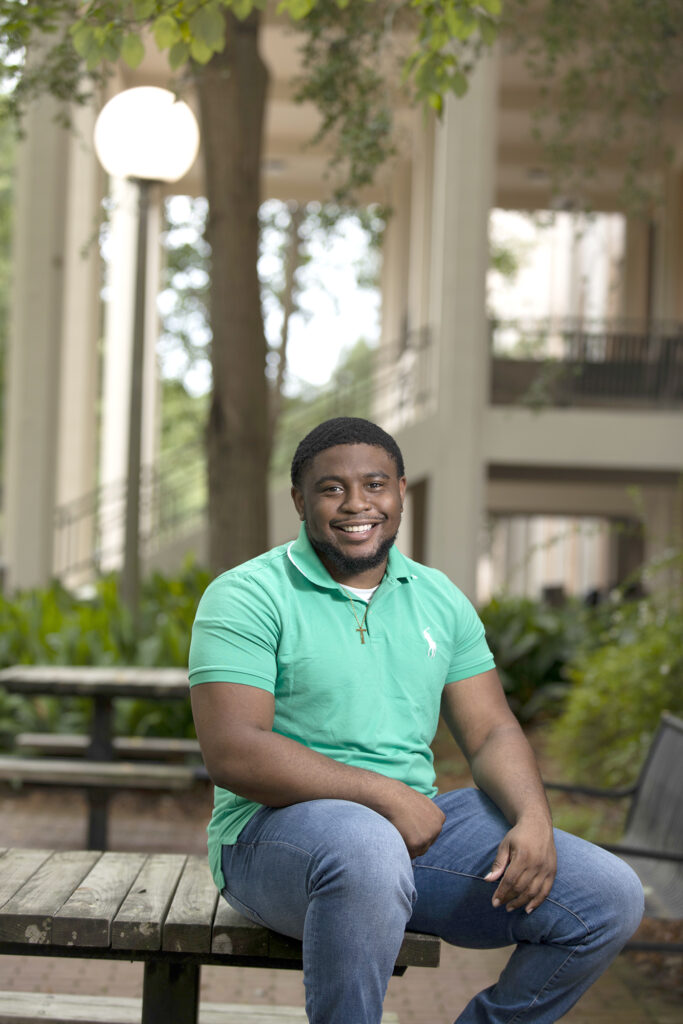 Trevyn Gray is an ambassador for the Mary Frances Early College of Education and is in the Honors Program at UGA. (Photo by Andrew Davis Tucker/UGA)

Gray is a recipient of the Gates Scholarship, a full scholarship for five years given to 300 minority students nationally each year.

While he was in high school, a guidance counselor sent Gray an email about the scholarship. “There was no way I was going to get it,” he said to himself. “But what do you lose by applying to a scholarship that prestigious?”

He applied. And it’s the reason he’s at UGA.

For Gray, it’s all about the risk-reward ratio.

Gray is also a student in UGA’s Honors Program. A friend in the Honors Program gave him an elevator speech on why he should apply—small class size, early registration, that it’s a resume builder, allows you to challenge yourself.

He didn’t think he had a chance of getting in. But he did. 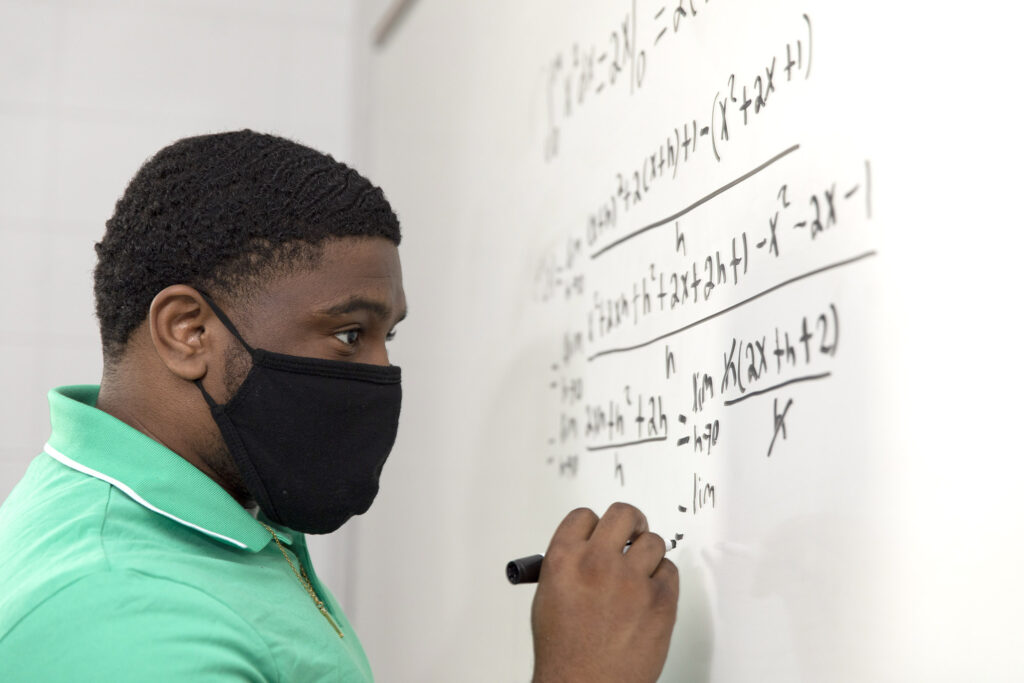 Math education major Trevyn Gray writes up math equations on a dry erase board in one of the classrooms inside Aderhold Hall. (Photo by Andrew Davis Tucker)

“You don’t really lose anything by applying,” Gray said. “You only live one life. Why sit around not doing things that you could do? What do you lose by doing it?”

For Gray, that might mean riding the night bus around campus with his friends singing the “Phineas and Ferb” theme song or going to grab pizza. It might mean hanging out at Tate Time with his fellow Black students or exploring the local mall and making it into a fun trip. For him, it’s about “making the best out of what we have.”

It’s not all luck, though. Gray says that work ethic is another part of his formula for success. It’s what he tells the middle school youths he mentors. “Your work ethic is important in everything you do. Discipline is important. You can’t do much without discipline. You can’t stay on track without it.”

From Skate Night hosted by the African Student Union to working the concession stand at football games, Gray packs his schedule at UGA. His goal is to surround himself with friends and mentors. It’s the last part of advice he’d given his younger self: “Have people around you that can contribute to your life and you can contribute to their life.”