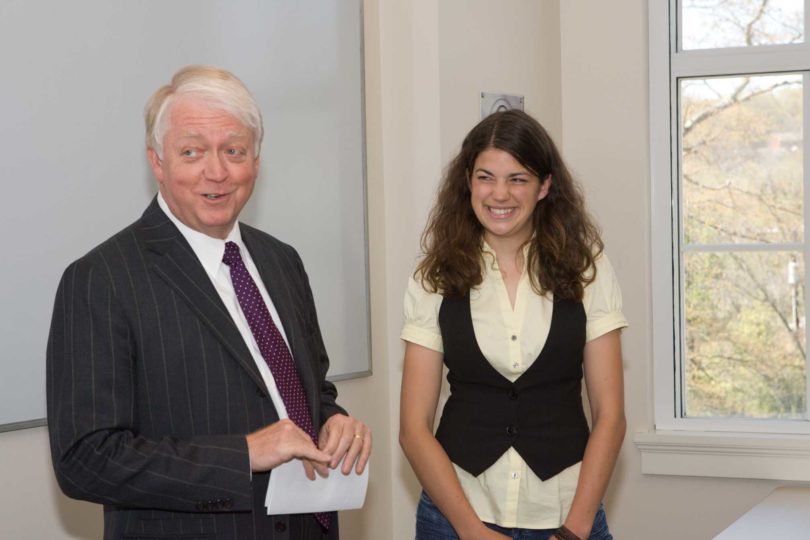 Christina Faust smiles after UGA President Michael F. Adams surprised her in class March 25 with the news that she has been awarded a 2008 Harry S. Truman Scholarship. Faust

Christina Faust, an Honors student from Athens, has been awarded a 2008 Harry S. Truman Scholarship, a prestigious national honor that recognizes outstanding juniors who are preparing for public service careers.

Faust, a graduate of Cedar Shoals High School, is pursuing a dual bachelor’s/master’s degree in ecology. She is the daughter of Lynn and the late Tim Faust, a former professor in UGA’s Warnell School of Forestry and Natural Resources.

Faust is among 65 recipients chosen from across the U.S. from a pool of 595 candidates. She is the fifth UGA Truman Scholar in the past six years and the 15th UGA recipient since 1982.

“Christina Faust is truly one among us who has excelled. She is an outstanding student who offers future leadership in the areas of environmental science and sustainability,” said UGA President Michael F. Adams. “We are all excited for her and proud of her accomplishments.”

The Harry S. Truman Scholarship Foundation was established by an act of Congress in 1975 as a living memorial to the former U.S. president, who was dedicated to education and public service during his life. The scholarships, worth up to $30,000 for graduate study, recognize students with demonstrated leadership potential and stellar academic records who are committed to making a difference through public service.

“Her friends do not necessarily know Christina as the author of scholarly journal articles or the recipient of best poster presentation awards,” said David S. Williams, director of UGA’s Honors Program and UGA’s faculty representative for the Truman Scholarship. “Rather, they know Christina with the effervescent, ever-present smile, who leads by strong example and as an officer in groups such as Habitat for Humanity, and they work alongside her as a mentor and volunteer. She is truly a Renaissance person.”

Faust, who is also the recipient of a Foundation Fellowship, UGA’s premier undergraduate scholarship for academically outstanding students, has traveled to five continents. She was first introduced to sustainable development while on a trip to Ecuador led by Ron Carroll, a professor of ecology and co-director of the River Basin Center at UGA. Independent study-abroad trips to New Zealand and Greece further developed her interest in wildlife conservation and infectious diseases.

“Christina is one of those amazing, rare individuals who happily takes on many responsibilities and does all of them exceeding well, whether academic courses, research, service or athletics,” said Carroll.

Through the Eugene P. Odum School of Ecology, Faust is conducting thesis research on environmental factors affecting the transmission of avian influenza virus during its aquatic cycle. She also has completed experiments on how bivalves (aquatic mollusks) absorb the virus through the Southeastern Cooperative Wildlife Disease Study.
After Faust earns her UGA degrees in May 2009, she plans to attend veterinary school to pursue a DVM and a Ph.D. With her specialization in ecology and evolution of infectious diseases, Faust would like to conduct research for environmental nonprofits or nongovernmental organizations, integrating ecological concepts with sustainable development and conservation strategies.