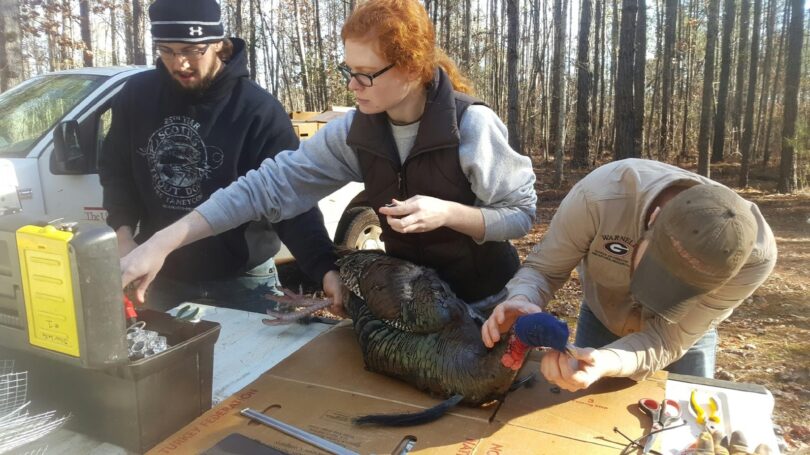 Researchers tag a turkey as part of the effort to discover why the turkey population is declining. (Submitted photo)

Spring isn’t just for wildflowers and pollen—it’s also a time to hear wild turkeys gobble across Georgia and much of the Southeast.

That telltale chortle is also a signal that turkey hunting season is about to open, although changes to Georgia’s state regulations will keep hunters on standby for a week or two longer this year.

But the changes, say wildlife experts, will hopefully benefit both turkeys and hunters.

Georgia’s turkey hunting season opened on private lands statewide on April 2 and hunting on public lands opens April 9. This is a week or two later than previous seasons to give female turkeys more time to breed with males and then lay their eggs. A delay of just a couple weeks could have a positive effect on turkey populations, which have been declining in recent decades.

On the flipside, though, are hunters who hear toms gobbling and are eager to get out to the woods. The new regulations aim to strike a balance between hearing turkeys gobble and allowing more time for birds to breed, which will hopefully help stabilize the population. “Agencies want to open seasons so hunters like me can go and enjoy the gobbling activity, but what that results in is birds often being harvested early in the breeding season, which researchers have known for decades may be problematic if harvest rates (percent of males harvested) are high,” said Mike Chamberlain, the Terrell Distinguished Professor of Wildlife Ecology and Management at the University of Georgia Warnell School of Forestry and Natural Resources.

Chamberlain’s research on wild turkeys has allowed state wildlife officials to pinpoint when female turkeys begin to nest and then compare that with trends in gobbling. This timing is key: Typically, hunters want to get out in the woods when they can hear gobbling. But if hunting season starts too early, it could disrupt breeding.

“What we’ve been able to show—frankly, what we’ve known for decades—is that gobbling starts way earlier than breeding starts. Agencies have shifted seasons to time them to when gobbling is ramping up, but that’s not when nesting is ramping up. So, that’s resulted in seasons opening up earlier than they should have, biologically,” said Chamberlain. “And that didn’t matter 20 years ago when turkey populations were exploding. But now that they are declining, agencies are looking at what they can do to have some effect on the population. And harvest is the only thing agencies can control at a statewide level.”

Turkeys gobble to help find a mate, as well as to assert dominance among other male turkeys. Turkeys have distinct social hierarchies, said Chamberlain, and gobbling is a key component to keeping the status quo.

His research, which is ongoing across the Southeast, tracks female turkey movements throughout the breeding season using small backpack-like devices outfitted with accelerometers and GPS devices. His research team also sets up song meters, which are small boxes that record sounds made in the area to capture when turkeys gobble.

After just a few days of collecting data, the research team has thousands of hours of audio along with thousands of data points showing turkey movements. Using special computer software, they are able to parse out the sounds to just turkey calls, then overlay that information with maps showing females returning to the same spot over and over—an indication she has laid her nest.

Emily Rushton, turkey biologist for the Georgia Department of Natural Resources’ Wildlife Resources Division, said typically the spring turkey season focused on when toms gobbled while also being mindful of peak breeding activity. The data that’s now available from Chamberlain’s lab allowed the state agency to better pinpoint key parts of the turkey breeding season. “In particular, (Chamberlain’s) research prompted a harder look at what factors influence gobbling on our public lands, and how pressure on these areas might be affecting breeding activities,” she said.

There may still be a host of other factors affecting the decline of wild turkey populations—habitat loss, fragmentation of the landscape and poor management practices are chief among them, said Chamberlain. But being more mindful of when the birds are breeding is one way to help the population while also securing better hunting trips in the future. “Agencies are trying to control the one thing they can control at the scale at which they manage the birds,” added Chamberlain. “That thing being the timing and rate of harvest.”