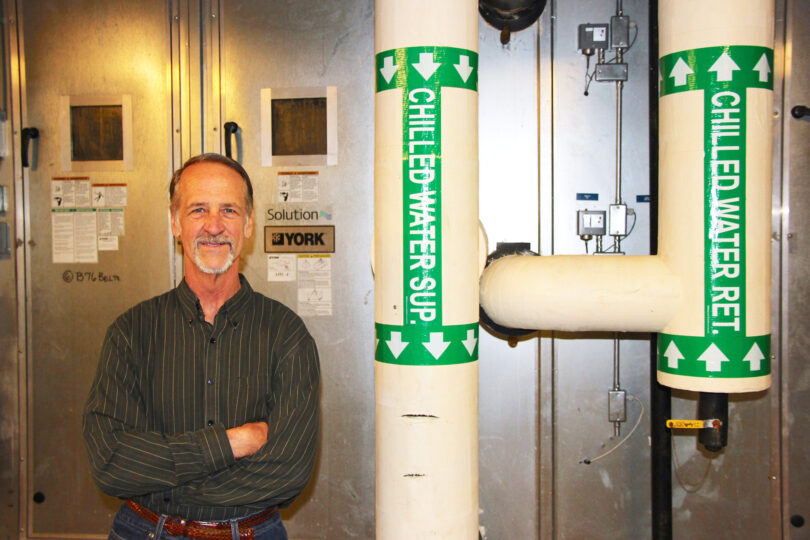 Tom Lawrence stands in front of the chiller located in the Driftmier Engineering Center. (Photo by Mike Wooten/UGA)

Keeping cool during a hot summer is essential, but energy costs can ramp up when the air conditioner is in high demand. A new study from the University of Georgia suggests there is a painless way to reduce energy costs: Turn up the thermostat. Even a degree or two makes a difference.

While the study conducted by Thomas Lawrence looked at larger buildings, the same theory can be applied to single family homes for both the cooling and heating seasons.

“Over the years, studies have shown that for every 1-degree change in a thermostat setting, there is roughly a 3% increase in energy savings (around normal settings),” he said.

The Department of Energy estimates that consumers can save as much as 10% a year on heating and cooling by turning the thermostat back 7-10 degrees from its normal setting for eight hours a day.

Lawrence’s study, conducted on campus, revealed that increasing building temperatures reduced energy consumption by 19% to 40% with no decrease in the comfort of building occupants. Applied across campus, this strategy could save as much as $110,675 annually.

“We were able to document that there were no thermal comfort perception problems generated by making these fairly small—2- to 3-degree—temperature setpoint increases during the summer cooling season,” said Lawrence, professor of practice in the College of Engineering. “This corresponds to other work done previously on the UGA campus, which indicates that there is potential for energy savings with our cooling systems while not adversely affecting the overall thermal comfort perceptions of the building occupants.”

Lawrence has conducted a number of studies on campus facilities in areas including energy efficiency and informatics, water efficiency, thermal comfort and indoor air quality. The studies were an outgrowth of the work he did in support of UGA’s energy efficiency program through the Engineering Outreach group, in essence serving as an internal consultant for the university from 2006-2011.

“I tell people the UGA campus is my laboratory,” he said.

Much of the work for this study was performed by Tara Sharpton, who earned a master’s degree in environmental engineering in May 2019, and was also supported by undergraduate student Morgan Sutter through the Center for Undergraduate Research Opportunities. Data was collected at Amos Hall, Benson Hall and Moore-Rooker Hall during portions of the cooling season of 2018. These buildings, part of the second phase of construction for the Business Learning Community, are six stories tall, fully air-conditioned and have been operating since 2017.

“The BLC buildings are all relatively new and have newer building control systems that made it easier to make adjustments building wide and ensure better quality control on the data collection,” Lawrence said.

The study focused on the impact of adjusting cooling system setpoints, examining overall thermal comfort perception and satisfaction as well as total HVAC energy consumption. Building occupants were not informed of the setpoint changes before being surveyed about their thermal comfort perception. The normal cooling temperature setpoints on campus typically range between 70 and 73 degrees. Increasing the setpoints up to 74 or 76 degrees reduced chilled water consumption for the buildings by 19% to 40%, respectively, without complaints from building occupants. If applied across campus in the academic and office spaces, the estimated annual energy cost savings would be between $52,900 and $110,675.

“This represents an opportunity to improve the energy efficiency of campus buildings and mitigate the associated CO2 emissions,” Lawrence said.

The study will be presented at the CIBSE ASHRAE Technical Symposium 2020, “Engineering Buildings, Systems and Environments for Effective Operation,” that will be held online in September. CIBSE is the Chartered Institute of Building Services Engineers, which is the technical professional society for building systems engineers in the United Kingdom. ASHRAE is the American Society of Heating, Refrigeration and Air-Conditioning Engineers.