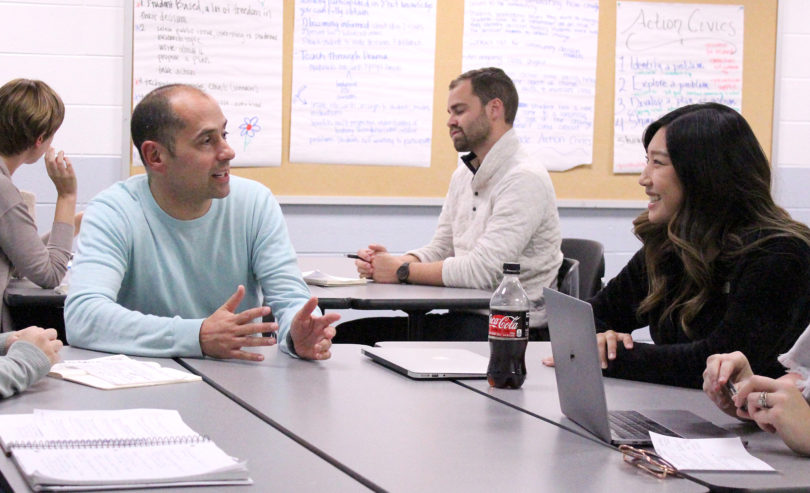 H. Jim Garrett teaches social studies education at the University of Georgia College of Education, where he examines anxiety teachers may have in teaching uncomfortable topics. (Kristen Morales/UGA)

A political discussion can easily turn emotional. But when these emotions erupt among middle and high school students, they can become powerful teaching tools to keep kids engaged and learning, says a University of Georgia researcher.

A new study by UGA College of Education associate professor H. Jim Garrett aims to determine these emotions to help understand not only how students weigh facts and sources, but also how students draw a line between their own beliefs and reality.

While much of the curriculum in schools focuses on how students dissect information and understand sources, terms from political psychology such as “motivated reasoning” and “confirmation bias” that have crept into the lexicon have added a new dimension to understanding how we look at facts and make conclusions.

“We have research that helps students use evidence to make arguments and become critical consumers of information,” said Garrett. “But since November 2016, I’ve encountered all these terms from political psychology and the idea that we’re not just rational consumers of knowledge-and little of the research in social studies education accommodates this feature of political thinking. So this project will hopefully add to that.”

The study, which is funded by the Spencer Foundation, will focus on classroom discussion among middle and high school students, with the research team taking videos and analyzing the emotions that result from those discussions. This age group is critical, said Garrett, who teaches social studies education, because it’s a point where students begin to question lessons that they don’t feel apply to their own lives.

If students cannot relate to what is being taught, they are less likely to be engaged in the subject, said Garrett. Political discussions, often fraught with emotion no matter the age group, are one way teachers can keep students engaged.

The goal is to recognize the point when students encounter information that runs counter to their own beliefs and the path they take-do they discard it, or do they try to understand it, Garrett said.

“This way it’s more about asking, ‘How is it that people encounter knowledge about the world?'” he said.

“A discussion in a single class is not going to solve the problems of slavery, nor will it solve the problems of current racial tension,” he said, adding that sometimes teachers avoid these realities because of the tension they cause. “But we can be honest about the realities in really careful ways, responsive ways, and check in with our students throughout the discussion about how they feel,” he said.

Ideally, he said, this study will help teachers better anticipate their and their students’ emotions when discussing difficult topics. By responding and being flexible in where the discussion leads, it creates an opportunity to engage and empower more students.

“Sometimes we worry about what knowledge will do to people, and what will happen to our kids,” Garrett said. “But it’s also about what happens when people do learn about it. I’m fascinated by the ways people are enlivened by that information in both positive and negative ways.”