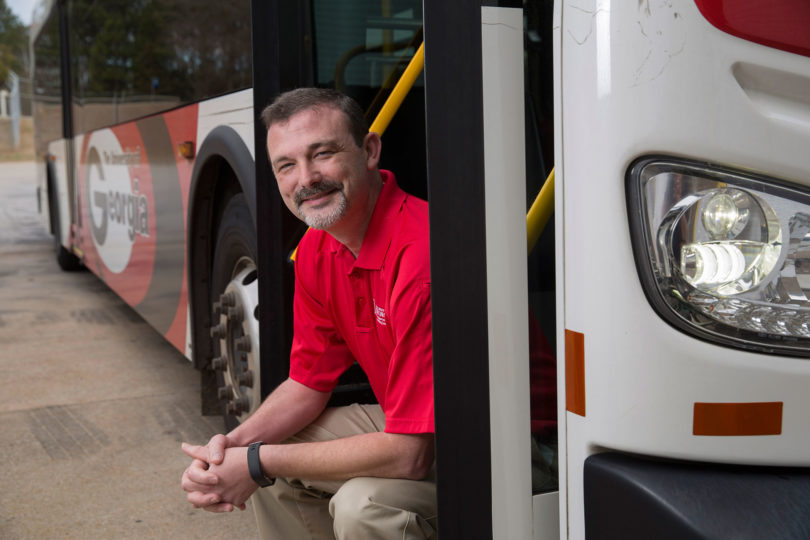 Akers received a gold medal in the outstanding individual category, while Barco received an honorable mention.

The award recognizes university employees who have demonstrated exceptional “service to the students, colleagues and other customers of the USG over the last year.”

A bus driver in UGA’s Campus Transportation and Parking Services, Akers implemented an automated program to schedule 250 UGA bus drivers, many of whom are students, who log over 4,000 hours of work each week.

The system replaced an Excel spreadsheet used to schedule the drivers and a Facebook page for driver changes. Under the old system, it would take two to three people several days to manually complete the schedule; under the new system, scheduling takes two minutes to run.

The new system is paperless and can be accessed from a mobile device. It takes into account students’ scheduling preferences and proactively identifies multiple, simultaneous leave requests. The system, implemented in summer and fall, reduced the number of scheduling gaps from 66 per day to less than two per day. The new system also has a built-in trade board for students, who make up 80 percent of the drivers, to trade shifts.

The new system incorporates not only day-to-day routes, but also driver training, charters and special events.

Barco was named an honorable mention in the outstanding individual category. A retired Air Force lieutenant colonel, Barco is the director of the Student Veterans Resource Center, which provides support to the many veterans attending UGA. Since joining the university in 2013, Barco has increased the amount of support available to veterans across campus.

He created a comprehensive veteran orientation and meet-and-greet each semester, a mentoring and coaching program to connect new and established student veterans, and partnerships with campus advisers to make sure veterans are advancing academically. He co-founded the UGA Veterans Success Council and opened a service desk with the Student Veterans Resource Center.

In partnership with the UGA Career Center, he established Corporate Connect to pair student veterans with companies and organizations that want to hire veterans.