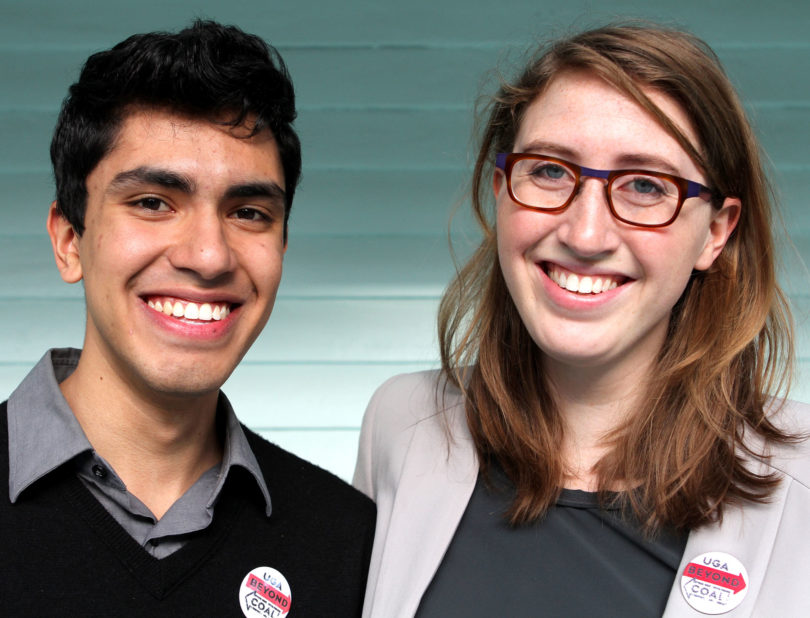 Athens, Ga. – Two University of Georgia Honors students were among 50 students nationwide who were awarded 2013 Morris K. Udall and Stewart L. Udall Foundation Scholarships. The scholarships of up to $5,000 are awarded annually to outstanding sophomores and juniors pursuing careers focused on environmental or Native American public policy.

The recipients bring the university’s total of Udall Scholars to 12 in the past 10 years. This year’s recipients are:
• Sara Black, a junior in the UGA Foundation Fellows Program from Birmingham, Ala. who is pursuing degrees in anthropology from the Franklin College of Arts and Sciences and in ecology from the Odum School of Ecology; and
• Ian Karra, a junior from Roswell who is pursuing degrees in economics and finance from the Terry College of Business.

Matthew Tyler, a junior Honors student and Foundation Fellow from Atlanta who is pursuing a dual bachelor’s and master’s degree in political science from the School of Public and International Affairs, received an honorable mention.

“UGA students continue to compete at the very highest levels with students from America’s top colleges and universities,” said UGA President Michael F. Adams. “The issues for which the Udall Scholarship was established are increasingly important to the health and well-being of the nation, and I am pleased that Sara, Ian and Matthew have been recognized for their hard work and dedication.”

The Morris K. Udall and Stewart L. Udall Foundation administers the scholarship program, which was established by Congress in 1992 to honor U.S. Rep. Morris Udall’s 30 years of service. In 2009, his older brother, Stewart, was included in the recognition for his service as U.S. Secretary of the Interior.

“The Udall Foundation identifies student leaders who are helping to preserve and protect our natural heritage,” said David S. Williams, associate provost and director of UGA’s Honors Program. “I am proud of Sara and Ian, who are very worthy of being named Udall Scholars. I am also pleased that Matt received an honorable mention, because he too is very deserving of recognition. All of these students are inspiring, and they will no doubt continue to do great things in the future.”

Black plans to pursue a career in the environmental or food justice non-profit sector. She has held national leadership positions in prominent grassroots organizations, including the Real Food Challenge, the Greenhorns, the Sierra Club and the Sierra Student Coalition, where she currently works to coordinate trainings on grassroots organizing skills for young people. She is also a co-founder of Real Food UGA, a campus organization working with Food Services on sustainability initiatives.

She has participated in the UGA Washington Semester program and studied at Oxford University in the United Kingdom. In addition to being a Foundation Fellow and a National Merit Scholar, she is a member of Blue Key Honor Society and Palladia Honor Society for women.

Karra plans to pursue a career in grassroots environmental advocacy, influencing renewable energy policy at the state level and at institutions of higher education. He represented the U.S. as a youth delegate to the U.N. Climate Change Conference in Qatar and will represent the Sierra Club and UGA as an ambassador to the Clinton Global Initiative University Conference this month.

He is on the executive board of the UGA Sierra Student Coalition and a founding member of the UGA Beyond Coal campaign, which aims to replace the university’s coal-fired boiler with renewable sources of energy. Karra and Black co-lead Georgia YES (Youth for Environmental Solutions), a network of more than 75 student environmental leaders on more than a dozen campuses in Georgia. The organization works to promote clean energy infrastructure and policy on college campuses throughout the state. Karra also spent a semester working and studying tropical ecology through UGA Costa Rica.

“Sara and Ian have been tireless advocates for the environment, especially encouraging the university to abandon the use of coal,” said Ron Carroll, emeritus professor in the Odum School of Ecology and faculty representative for the Udall Scholarship. “What has really impressed me is how well-grounded their advocacy efforts are in sound science and policy.”

A 14-member independent review committee selected this year’s group of Udall Scholars on the basis of commitment to careers in the environment, Native American health care or tribal public policy; leadership potential; academic achievement; and record of public service. The review committee also awarded 50 honorable mentions. The 2013 class of Udall Scholars was selected from 488 candidates nominated by 230 colleges and universities.

The 2013 Udall Scholars will assemble in August in Tucson, Ariz., to receive their awards and meet policymakers and community leaders in environmental fields, tribal health care and governance.