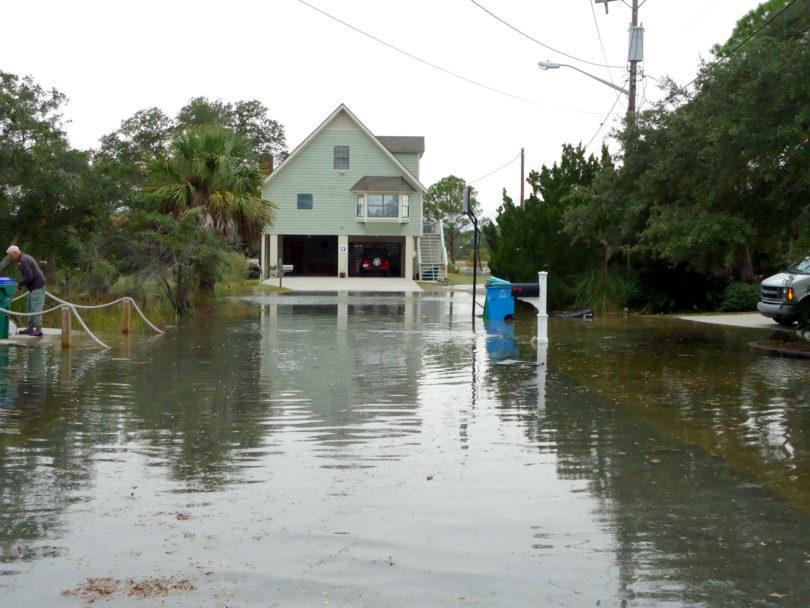 Flooding on Tybee Island associated with normal spring high tides is expected to become increasingly common in the future. On Nov. 14

Athens, Ga. – Tybee Island residents and municipal leaders will get an update on ways to plan for increased flooding due to sea level rise and more frequent and severe storm surges at a public meeting scheduled next month and facilitated by researchers from the University of Georgia.

Participants will hear a summary of adaptation possibilities reviewed by researchers from Georgia Sea Grant and the Carl Vinson Institute of Government, two public service and outreach units of UGA, and have the opportunity to ask questions and make comments.

A second meeting geared toward Tybee Island government and elected officials will be held on March 5 at 9 a.m. It also is open to the public.

Speakers will include Jason Evans, an environmental sustainability analyst for the Institute of Government; Rob McDowell, director of the institute’s Environmental Policy Program; and Sam Merrill, a professor in the New England Environmental Finance Center at the University of Southern Maine who participated in the review.

The Carl Vinson Institute of Government’s Environmental Policy Program, Georgia Sea Grant and the Georgia Department of Natural Resources’ Coastal Resources Division partnered with Tybee Island officials and residents to formulate a plan for responding to rising water levels on the barrier island. Others involved in the project review are the Chatham County-Savannah Metropolitan Planning Commission and UGA’s College of Environment and Design.

Researchers have modeled a range of options for stemming the tide, including sea walls, elevated infrastructure and beach renourishment. A follow-up meeting planned for this spring will focus on policy adaptations the community can consider for protecting the island’s assets from sea level rise.

The two-year project is funded through a grant by the National Oceanic and Atmospheric Administration’s National Sea Grant Program and will potentially serve as a model for other coastal communities in Georgia, the Southeast and nationwide.