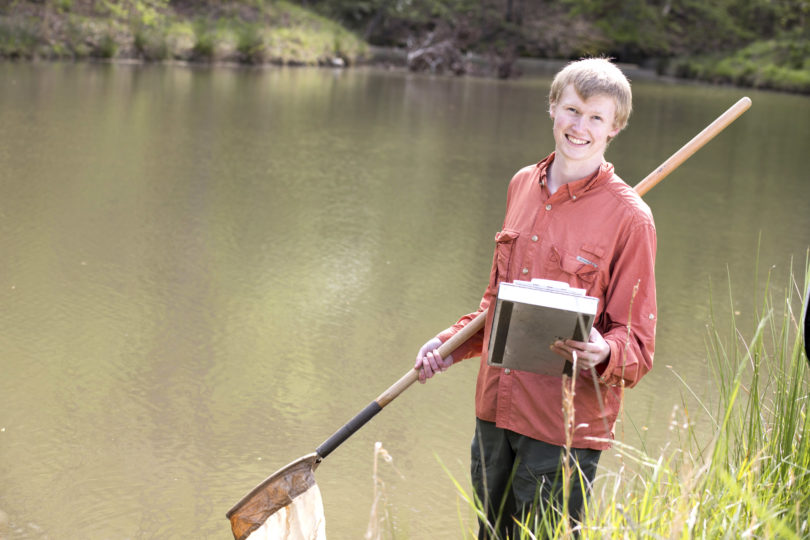 University of Georgia junior Guy Eroh was one of 50 undergraduates from across the nation and U.S. territories named as a 2018 Udall Scholar.

University of Georgia junior Guy Eroh has a particular passion for fish, and his focus on the sustainability of these aquatic animals has earned him national recognition as a 2018 Udall Scholar.

He was one of 50 undergraduates from across the nation and U.S. territories selected for the scholarship awarded to sophomores and juniors on the basis of their commitment to careers in the environment, Native health care or tribal public policy.

Eroh, from Portland, Oregon, is pursuing a bachelor’s degree in ecology and a master’s degree in forest resources. An Honors student and Foundation Fellow, he intends to earn a doctorate in biological science with an emphasis in molecular genetics and fisheries science, with the long-term goal of improving the recovery and sustainability of the world’s fish populations and their habitats.

“I am pleased that a University of Georgia student has once again received this prestigious academic scholarship,” said President Jere W. Morehead. “The university congratulates Guy on this significant achievement and wishes him the very best in all of his future endeavors.”

With the addition of Eroh, UGA has had 12 Udall Scholars in the past eight years and 17 total since the scholarship was first awarded in 1996.

Through the application of novel, relevant scientific information and technologies, Eroh intends to revolutionize the way fish populations and their ecosystems are managed. He is preparing for a career specific to fish conservation as a researcher for a university or government agency.

“Guy is a most apt recipient of the Udall Scholarship,” said David S. Williams, associate provost and director of the Honors Program, who serves as the Udall Scholarship faculty advisor for UGA. “For as long as I have known him, Guy has been focused on the important role of fish in ecological sustainability. I applaud and am encouraged by his passion and commitment.”

Eroh is president of 5 Rivers UGA and has been a member of Trout Unlimited, the Upper Oconee Watershed Network, UGA Ocean Initiative, the Georgia chapter of the Society for Conservation Biology, and the Georgia and Oregon chapters of the American Fisheries Society.

He currently conducts research with UGA faculty Cecil Jennings, Robert Bringolf and Jean Williams-Woodward to maximize hatch success of walleye eggs. Eroh also interned for the Utah Division of Wildlife Resources and the Center for Environment, Fisheries and Aquaculture Science in the UK.

In addition to Eroh, UGA junior Abigail West was one of 50 students nationwide to receive an honorable mention from the Udall Foundation. A Foundation Fellow from Oklahoma City, Oklahoma, she eventually plans to pursue a master’s degree in fine arts after working at artist-in-residency programs focused on sustainability, specifically regarding waste, consumption and consumerism.

The Udall Scholarship provides up to $7,000 for eligible academic expenses and includes a four-day orientation in Tucson, Arizona, and access to the Udall Alumni Network, an extensive group of environmental and tribal leaders and public servants. Since 1996, the Udall Foundation has awarded 1,574 scholarships totaling $8,090,000.