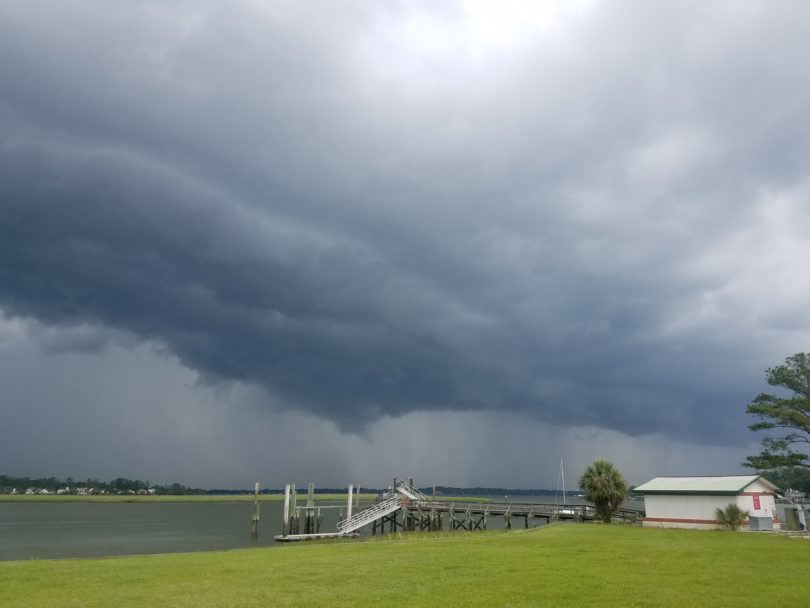 The Skidaway Institute of Oceanography in May 2018. (Photo by Amanda Frossard)

This past July, the U.S. Department of Energy announced $10 million in funding for 13 projects aimed at further enhancing one of the world’s most sophisticated computer models for understanding weather and climate patterns.

The projects will support development and analysis of the Energy Exascale Earth System Model, known as E3SM, which seeks to provide more accurate and higher-resolution representation of weather and climate events by taking advantage of the cutting-edge supercomputing facilities at DOE National Laboratories.

Among the projects, a University of Georgia-led collaboration will evaluate two promising directions in the future development of the E3SM: The first increases the horizontal-resolution of the model in order to better capture intermediate- to large-scale dynamics with a single resolved scale (~25 km). The second uses a high-resolution cloud-resolving model (~2 km) embedded within the standard-resolution E3SM (~100 km) to represent cloud processes with a second resolved scale.

“Weather events that produce extreme precipitation cover a range of spatial scales from tens to thousands of kilometers and include systems from individual thunderstorms to hurricanes to massive winter storms,” said Gabriel J. Kooperman, assistant professor of geography in the UGA Franklin College of Arts and Sciences and principal investigator on one of the 13 projects. “The objectives of this work are to improve our understanding of the small- and large-scale processes that govern these events, and improve our ability to predict and prepare for their changes under the influences of natural variability and human activities.”

Kooperman will lead a collaboration evaluating the benefits of the two development versions of E3SM for simulating aspects of extreme precipitation with Kevin A. Reed at Stony Brook University, Walter M. Hannah at Lawrence Livermore National Laboratory, and Angeline G. Pendergrass at the National Center for Atmospheric Research.

“We are investigating the tradeoffs between these different approaches, in terms of the computational resources they require, and their abilities to resolve the convective-scale processes that control the intensity versus large-scale processes that control the structure of extreme precipitation events that impact the United States,” Kooperman said.

The new DOE projects are aimed at improving representation of oceans, atmosphere and clouds, as well as simulation of extreme weather events such as intense precipitation, tropical cyclones and monsoons.

Projects involve analysis of how well models represent natural process, and where they can be improved by comparing the model with observations and development of new software designed to better simulate the processes in question.

More on the UGA-led project, “Simulating extreme precipitation in the United States in the Energy Exascale Earth System Model: Investigating the importance of representing convective intensity versus dynamic structure,” is available at https://www.energy.gov/articles/department-energy-announces-10-million-earth-system-model-development-and-analysis