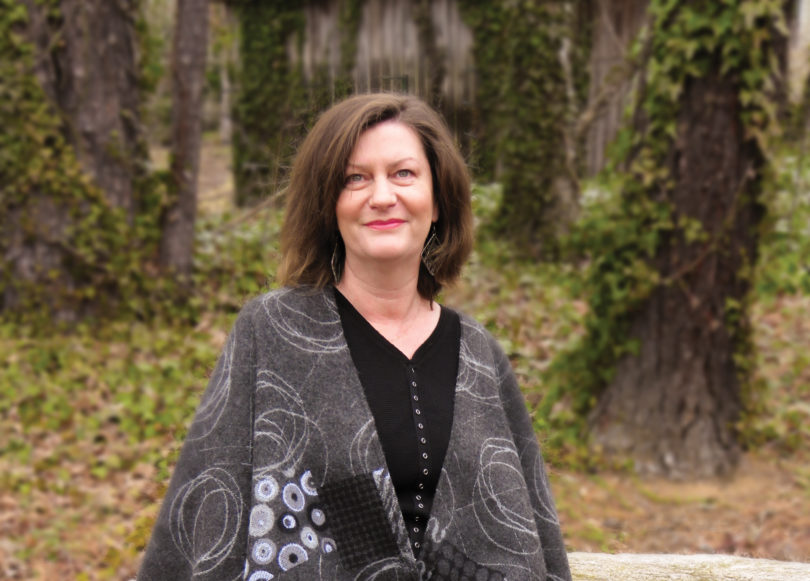 Not satisfied with the eco-friendly cleaning products on the market, UGA alumna Mari Fox instead decided to create her own.

Before enrolling at UGA, Fox served four years in the Army.

Mari Fox was at a stoplight while on a mission to find a specific brand of environmentally friendly dishwashing liquid when an idea struck her.

“I thought, ‘How eco-friendly am I really being?’ I’m driving around, and I’m going to purchase a product that is 99.9 percent water and packaged in plastic,” says Fox, who lives near Asheville, North Carolina. “So I decided right then and there: I think I can do better.”

That thought led Fox ABJ ’89, BFA ’97 to create her own line of eco-friendly cleaning products.

Passionate about the environment and looking to transition from her corporate marketing career, Fox embarked on two years of thorough research and planning as she worked to get her fledgling company, Shecology, up and running. First, she tested all existing cleaners and laundry detergents to set a benchmark for her products. She also attended events and tradeshows, and it was there that she found her secret ingredient, the soap nut.

“It’s called a soap nut, but it’s actually a piece of fruit from the Himalayas, and it’s just loaded with a natural cleaner in the shell,” she says. “I bought some and put that product through the same testing mill that I had been doing before. And its performance was exceptional, so I knew I had found the ingredient that I was looking for.”

Fox’s path to starting her own business has taken some interesting turns. Before enrolling at UGA, she served in the army for four years and continued to serve in the Army Reserves during and after her time at UGA. “UGA gave me the opportunity as a non-traditional student to still come in and really excel,” she says. “And I really learned a lot about business and succeeding.”

Her innate creativity has fueled her development of new products, including a DIY Home Brew all-purpose cleaner, and she does extensive testing to ensure their efficiency. Fox has two patents filed for her products and is currently focusing on growing her online business and social media presence.