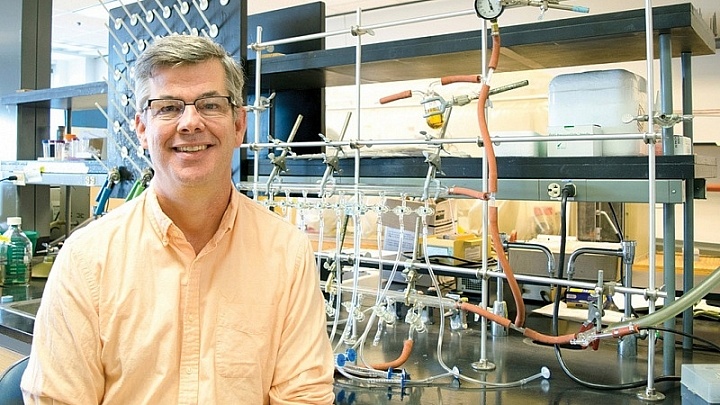 Recently published research from the University of Georgia and UConn Health provides new insight about the basic biological mechanisms of the RNA-based viral immune system known as CRISPR-Cas.

CRISPR-Cas, short for Clustered Regularly Interspaced Short Palindromic Repeats/CRISPR-associated, is a defense mechanism that has evolved in bacteria and archaea that these single celled organisms use to ward off attacks from viruses and other invaders. When a bacterium is attacked by a virus, it makes a record of the virus’s DNA by chopping it up into pieces and incorporating a small segment of the invader’s DNA into its own genome. It then uses this DNA to make RNAs that bind with a bacterial protein that then kills the viral DNA.

The system has been studied worldwide in hopes that it can be used to edit genes that predispose humans to countless diseases, such as diabetes and cancer. However, to reach this end goal, scientists must gain further understanding of the basic biological process that leads to successful immunity against the invading virus. 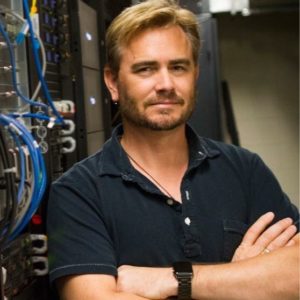 Distinguished Research Professor of Biochemistry and Molecular Biology in UGA’s Franklin College of Arts and Sciences and principal investigator for the project Michael Terns and UGA postdoctoral fellow Masami Shiimori collaborated with Brenton Graveley and Sandra Garrett at UConn Health to sequence millions of genomes to learn more about the process. Graveley is professor and chair of the Department of Genetics and Genome Sciences and associate director of the Institute for Systems Genomics at UConn Health, and Garrett is a postdoctoral fellow in his laboratory.

“This research is more fundamental and basic than studies that are trying to determine how to use CRISPR for therapeutic or biomedical application,” said Terns. “Our study is about the unique first step in the process, known as adaptation, where fragments of DNA are recognized and integrated into the host genome and provide immunity for future generations.”

Previously, researchers did not understand how the cell recognized the virus as an invader, nor which bacterial proteins were necessary for successful integration and immunity.

“In this project we were able to determine how the bacterial immune system creates a molecular memory to remove harmful viral DNA sequences and how this is passed down to the bacterial progeny,” said Graveley.

By looking at patterns in the data, the researchers discovered several new findings about how two previously poorly characterized Cas4 proteins function in tandem with Cas1 and Cas2 proteins found in all CRISPR-Cas systems. 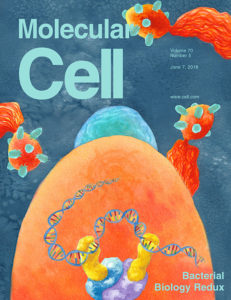 The cover of Molecular Cell in which the paper was originally published.

In this initial adaptation phase, one of two different Cas4 proteins recognizes a signaling placeholder in the sequence that occurs adjacent to the snippet of DNA that is excised.

When the Cas1 and Cas2 proteins are present in the cell with either of two Cas4 protein nucleases, Cas4-1 and Cas4-2, they act like the generals of this army-based immune system, communicating uniform sized clipped DNA fragments, directions on where to go next and ultimately instructions that destroy the lethal DNA fragment.

In order for a cell to successfully recognize and excise strands of DNA, incorporate them into its own genome and achieve immunity, the Cas4 proteins must be present in conjunction with the Cas1 and Cas2 proteins.

“Cas4 is present in many CRISPR-Cas systems, but the roles of the proteins were mysterious,” said Terns. “In our system, there are two Cas4 proteins that are essential for governing this process so that functional RNAs are made and immunity is conferred”

To achieve these findings, the research team from the University of Georgia created strains of archaeal organisms with key genetic deletions.

Hundreds of millions of DNA fragments captured in the CRISPR loci were sent to the Graveley lab in Farmington, Connecticut, where they were sequenced with the Illumina MiSeq system. The researchers then used supercomputing for bioinformatics analysis and data interpretation.

While there is still much to learn about the biological mechanisms involved in CRISPR-Cas systems, this research tells scientists more about the way these proteins work together to save the cell and achieve immunity.

“The data are so clear. We sequenced millions and millions of DNA fragments captured in CRISPR loci in different genetic strains and found the same results consistently,” he said.

The research was published in the journal Molecular Cell, and art from the publication was featured on the journal’s cover. The illustration was created by a UConn undergraduate student, Hayley Joyal, in collaboration with the scientists involved in the study.