Officials and dignitaries break ground on the Alice H. Richards Children Garden at the State Botanical Garden of Georgia.

With the ceremonial turn of red and black spades, University of Georgia officials and dignitaries officially kicked off construction of the $5 million Alice H. Richards Children’s Garden at the State Botanical Garden of Georgia on Sept. 1.

The 2.5-acre, handicap-accessible educational environment will include a canopy walk in the trees, a treehouse, creature habitats, hands-on garden plots, an underground zone, edible landscapes, and a bog garden and pond. One component, an amphitheater in the woods, was completed in 2015. The garden is expected to be open to visitors by early 2019.

“I want to thank all of the supporters who have donated to make this exciting project possible,” said UGA President Jere W. Morehead. “Their contributions are creating not only a beautiful addition to the botanical garden but also a bridge to new partnerships and collaborations between the botanical garden, the University of Georgia and the Athens community.”

So far UGA, in partnership with the garden’s board of advisors, has raised more than $4.3 million for the $5 million children’s garden, which includes an initial $1 million from the family of Alice H. Richards, for whom the garden is named. Richards, who was from Carrollton, was a charter member of the State Botanical Garden board of advisors and one of the garden’s most devoted and beloved supporters until her death in May 2007.

“She would be beaming with pride at this,” said her son, Jim Richards, who attended the groundbreaking with his son Chase. “She would be following the development of this garden with tremendous interest.” 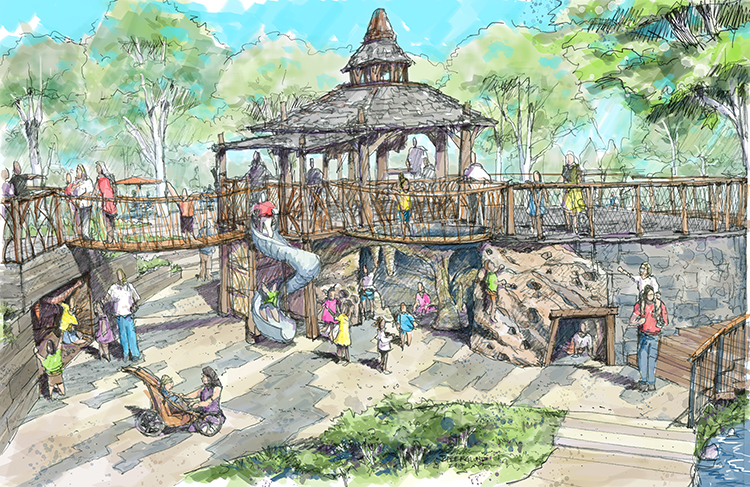 All 80 members of the State Botanical Garden board of advisors contributed to the children’s garden fund, which is 54 percent of the total amount raised, board Chairman Dr. Geoffrey P. Cole said.

“Alice loved nature, and early on she envisioned a place here at the garden where children could experience the beauty of nature in an area all their own,” said Jenny Cruse-Sanders, director of the garden. “She recognized that the State Botanical Garden of Georgia could play a critical role in ensuring that children understand, appreciate and take care of their natural environment.”

The children’s garden will further the university’s mission as a land-grant and sea-grant institution, providing more educational opportunities for teachers and students across the state, said Laura Meadows, interim vice president for public service and outreach.

“The State Botanical Garden of Georgia plays a critical role in the land-grant mission of the university by fostering appreciation, understanding and stewardship of plants and nature,” Meadows said. “The 313-acre preserve set aside by UGA in 1968 for the study and enjoyment of plants and nature is truly the state’s garden.”

Koons Environmental Design of Athens is leading the plans for the garden, which will be nestled in an area between the Alice Hand Calloway Visitor Center and the administration building. Allstate Construction of Perry will oversee a construction superintendent, based in Athens for the project.

To contribute to the Alice H. Richards Children’s Garden through Georgia Funder, go to https://t.uga.edu/34z.