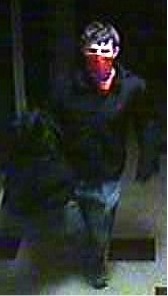 On Saturday, 04-05-14, the UGA Bookstore was burglarized. The photo shown was taken from video footage in the store and shows the suspect wearing a black hoodie, blue jeans and a red bandana over his face.

On Thursday, 04-10-14, the Tate Center on the UGA campus was burglarized. In this incident the suspect was wearing a grey hoodie, black athletic-type pants with a wide white stripe on the legs and waistband and a red bandana on his face.

It is believed the same individual committed both crimes.

The suspect appears to be a white male between the ages of 18 and 23, with brown hair, approximately 5′ 8″ to 5′ 10″ tall and approximately 160-180 pounds. The height and weight are only approximated.

Anyone with information that may lead to the identity of the suspect is asked to call the University of Georgia Police Department at 706-542-2200 or email Det. Lavender at llavender@police.uga.edu or Sgt. Parrish at dparrish@police.uga.edu.