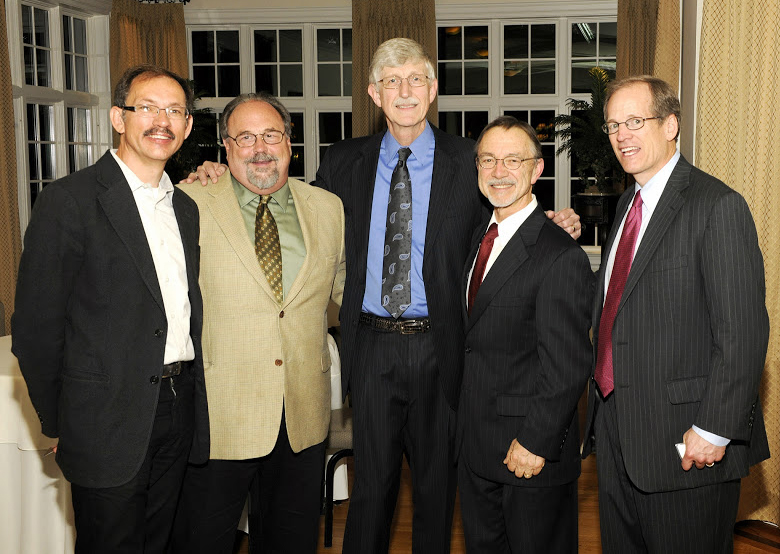 Athens, Ga. – University of Georgia cancer research was one of several human health projects that took the spotlight recently when Dr. Francis Collins, director of the National Institutes of Health, and Rep. Jack Kingston (R-Ga.) heard reports by scientists and faculty from UGA, Georgia Institute of Technology, Georgia State University and Emory University.

Collins and the university representatives discussed the ongoing NIH-funded research taking place within Georgia’s university community. UGA faculty focused on glycoscience—the study of complex carbohydrates, or glycans, and their role in cancer.

“Georgia is a hotbed of great science,” said Collins, who is responsible for managing and coordinating all the programs and activities of the 27 institutes and centers that fall within NIH, the nation’s medical research agency. NIH invests more than $31 billion each year in medical research; more than 80 percent of NIH funding is awarded through competitive grants.

NIH funding is critically important to advancing human health research at UGA. The university—which has cancer as one of its top focuses—received more than $43 million from the NIH in fiscal year 2012, nearly one-third of its federally funded research portfolio. Ongoing research funding is vital for basic biomedical advances and research that achieve breakthroughs in cancer prevention, diagnosis and treatment.

Due to automatic across-the-board spending cuts, the NIH’s budget will decrease by approximately 5 percent, or $1.55 billion, in fiscal year 2013. This has resulted in more than 700 grants going unfunded—only one in six applications submitted to the NIH is expected to be awarded funds.

The UGA Cancer Center’s researchers use a multidisciplinary approach to fight and treat cancer. Their efforts focus on detecting and diagnosing earlier stages of cancer, creating drugs and treatments to combat cancer, developing vaccines that enhance the body’s immune system against cancer and improving the quality of life of cancer patients and survivors through public health campaigns and support systems.

Pierce, who has served as the center’s director since its founding in 2004, is researching how glycans can serve as potential markers for cancerous and precancerous cells. While glycans once were believed to be an insignificant component of cells, Pierce’s research shows they are vital to cell behavior, human disease and cancer. His studies are bringing researchers a step closer to curing breast and pancreatic cancer and slowing tumor growth and preventing metastasis-the spreading of tumors or cancer from one organ to another.

Boons, a renowned expert in the field of glycoscience, has been synthesizing a carbohydrate-based vaccine that helps test subjects successfully elicit a strong immune response against cancers. The therapeutic vaccine aimed at fighting an existing disease has proven very effective in trials in mice.

At the meeting, David Lee, UGA vice president for research, discussed the Malaria Host-Pathogen Interaction Center, a recently established NIH-awarded consortium of researchers from UGA, Emory, Georgia Tech and the Centers for Disease Control and Prevention. Together, they’re studying how the parasites that cause malaria interact with humans and other animal hosts. The consortium’s investigations will help to diagnose, prevent and treat malaria, which infects hundreds of millions of people around the world each year and kills more than one million, mostly children.

“This visit provided an incredibly valuable and much-appreciated opportunity to engage directly with Dr. Collins and make him fully aware of the important human health-related assets and programs that are flourishing in Georgia,” Lee said. “The additional opportunity to provide some constructive feedback on NIH programs, made possible through the efforts of Rep. Kingston, was also welcomed.

“It was clear that Dr. Collins was very interested and engaged throughout the nearly two-day visit, and I have to believe that making the leader of the NIH more aware of the state of Georgia’s research strengths as well as its collaborative spirit will prove to be a good thing in the long run.”

Lee also joined other universities from around the state, including Emory, Georgia Tech, Georgia Regents University and Georgia State, for a roundtable discussion with Dr. Thomas Frieden, director of the CDC, Kingston and Collins to discuss the importance of continued funding for the NIH and the challenges facing young investigators due to cuts in research and development funding as a result of sequestration, which was implemented earlier this year.

“It is critically important to share with elected and appointed officials the impact sequestration will have not only on the University of Georgia but also the entire state,” said Andrew Dill, director of federal relations for UGA. “The cuts facing agencies like NIH will be detrimental to future discoveries, particularly at a time when other countries are investing greater amounts of resources in biomedical and health-related research.”