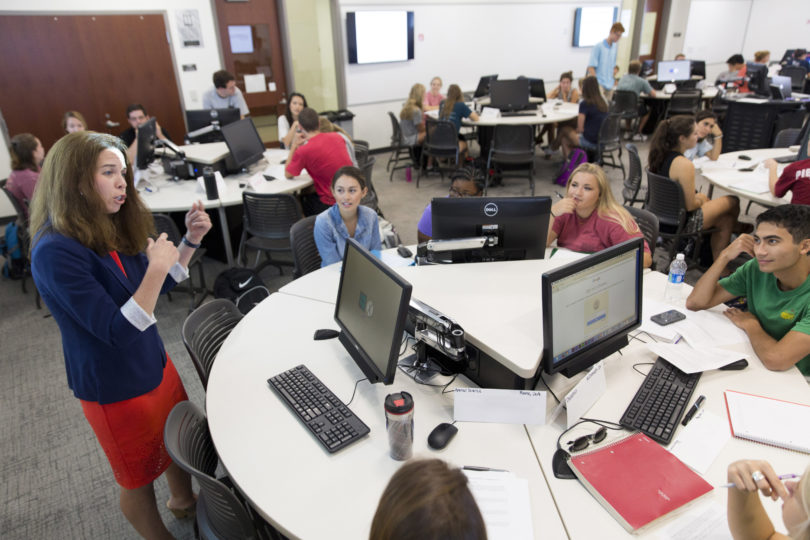 An active learning initiative at the University of Georgia is promoting higher levels of student engagement and success by transforming traditional classrooms into environments that foster critical thinking, discussion and teamwork.

New programs and initiatives launched to bring the quality of instruction and student support to new heights.

A commitment to academic excellence defines the University of Georgia’s Class of 2022, a group of students with record academic qualifications and high aspirations for the future.

The approximately 5,750 first-year students in the Class of 2022 have an average weighted high school GPA of 4.04, which is a record at UGA, and an average ACT score of 30, which ties last year’s record. For comparison, the average weighted GPA of incoming UGA students was 3.9 four years ago, and the average ACT score was 29. SAT scores of incoming students have reached a record level, as well, with an average of 1365 for the Class of 2022 compared to 1344 last year.

“As the University of Georgia gains prominence as one of the top public research universities, the caliber of students we are attracting continues to rise,” said UGA President Jere W. Morehead. “Equally important, we are providing an optimal learning environment in which students are challenged academically and supported in ways that promote their success.”

The rigor of students’ high school coursework relative to what is available at their school is a key factor in admissions decisions. Members of the Class of 2022 completed an average of eight College Board Advanced Placement, International Baccalaureate or dual-enrollment courses in high school, which ties last year’s record. 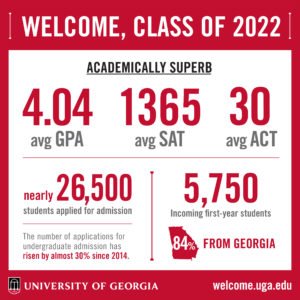 Members of the Class of 2022 are beginning their studies at a time when the university is rolling out several new programs and initiatives to bring the institution’s quality of instruction and student support to new heights.

“The Office of Instruction has been working diligently with the Division of Student Affairs and other campus partners on several initiatives that have stemmed from the President’s Task Force on Student Learning and Success,” said Rahul Shrivastav, vice president for instruction. “We hope to provide our students with a transformational experience that allows exploration and hands-on engagement. We want to prepare them to be critical thinkers who make a global impact. It’s exciting to see some of this work already implemented for our students.”

The Georgia Commitment Scholarship program has created more than 260 need-based scholarships since the program was launched in 2017, and a new program known as ALL Georgia is providing students from rural parts of the state with a network of tailored resources and programs. Programs such as Road Dawgs reach out to prospective students across the state, and scores of welcome events hosted by the Division of Student Affairs and units across campus are helping ease the transition to college by introducing students to academic life at the birthplace of public higher education in America.

The number of incoming students who self-identify as a member of a racial or ethnic minority has risen by 20 percent since 2014, and 31 percent of the Class of 2022 self-identify as members of a minority group. The Class of 2022 includes students from nearly every state and 47 countries around the world, and 84 percent of incoming students are Georgia residents.

Demand for a UGA education has risen to unprecedented heights. Nearly 26,500 students applied for admission to the Class of 2022, and 48 percent were offered admission. Since 2014, the number of applications for undergraduate admission has risen by nearly 30 percent.

“This is an exciting time at the University of Georgia,” said interim Senior Vice President for Academic Affairs and Provost Libby V. Morris. “Each year for the past several years we’ve had the privilege of enrolling students with increasingly impressive academic credentials, and each year our faculty and staff bring a renewed commitment to student success.”