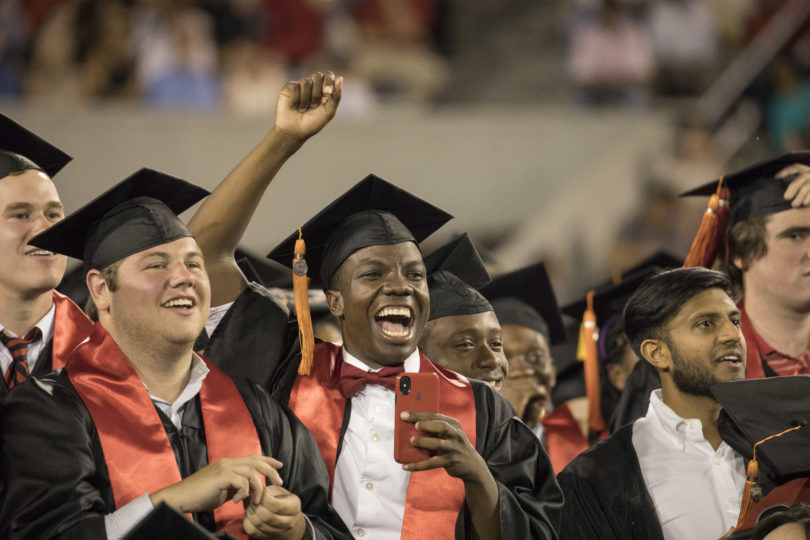 The University of Georgia will welcome its newest alumni Dec. 14 as 1,575 undergraduates and 1,224 graduate students—for a total of 2,799—have met requirements to walk in the university’s fall Commencement ceremonies.

The undergraduate Commencement ceremony is scheduled for 9:30 a.m. in Stegeman Coliseum, and tickets are required. The graduate ceremony, which doesn’t require tickets, will follow at 2:30 p.m.

In the interest of public safety, the 2018 fall Commencement ceremonies will follow the Southeastern Conference Clear Bag Policy.

The ceremony will be streamed live on commencement.uga.edu.

Nominated by President Barack Obama to preside over the Northern District Court of Georgia, Jones has served as a district court judge since 2011. In this role, he presides over cases involving the federal government, the U.S. Constitution, federal laws, controversies between citizens of different states and other matters. Jones previously served as a Georgia Superior Court judge, Athens-Clarke County Municipal Court judge, assistant district attorney for the Western Judicial Circuit and director of the Athens Child Support Recovery Unit.

Jones is a member of the executive committee of the University of Georgia Athletic Association board of directors and a trustee of the UGA Foundation, currently serving as secretary. He previously served as president of the UGA Alumni Association. He is a Double Dawg, earning a Bachelor of Business Administration degree in 1978 and a law degree in 1987 from UGA.

Chandler Chittom, who will receive his bachelor’s degree in marketing, is the student speaker for the undergraduate ceremony.

Eleven students will be recognized as First Honor Graduates during the undergraduate exercises for maintaining a 4.0 cumulative GPA in all work attempted at UGA as well as all college-level transfer work prior to or following enrollment at the university.

In addition, the university will award posthumous degrees to Oliver Walker Woodward, a Bachelor of Business Administration in real estate, and David Michael Miklesh, a Ph.D. in marine sciences.

Of the 1,224 graduate students eligible to walk at the 2:30 p.m. ceremony, 284 are doctoral candidates and 940 are receiving their master’s or specialist degrees.

Bargmann, a UGA alumna, is the Torsten N. Wiesel Professor at Rockefeller University and director of the Lulu and Anthony Wang Laboratory of Neural Circuits and Behavior. In 2016, she joined the Chan Zuckerberg Initiative as its first president of science, a role in which she oversees the development and execution of the scientific work of the initiative, which focuses on supporting basic biomedical research and supporting education through personalized learning.

Bargmann is a member of the National Academy of Sciences and the American Philosophical Society. Her additional honors include the Kemali International Prize for Basic and Clinical Neuroscience, the Breakthrough Prize in Life Sciences and the Benjamin Franklin Medal in Life Sciences. She co-chaired the National Institutes of Health committee that provided direction for the national Brain Research through Advancing Innovative Neurotechnologies (BRAIN) initiative to find new ways treat, cure and prevent brain disorders such as Alzheimer’s disease and epilepsy.

Because Commencement falls on a Friday, a routine UGA workday, parking patterns on South Campus near the coliseum will be adjusted. The South Campus parking deck (S-11), Carlton Street parking deck (S-15) and Foley Field/Magill Tennis Complex lot (S-14) will be open at no charge for visitors and guests. Parking for guests with disabilities is available in the Hoke Smith Annex lot (S12). The McPhaul Center lot (S-10) and the Coverdell lot (S-16) will be reserved for members of the Commencement platform party.A