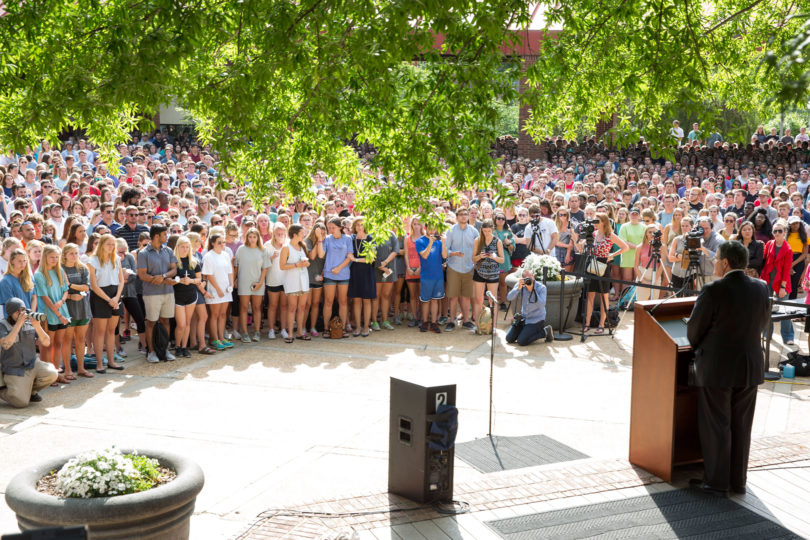 The crowd gathered at the end of a day that marked April 28 as the most tragic in recent university history.

UGA President Jere W. Morehead met with the campus community throughout the day to express the university’s sadness. At the gathering on Tate Plaza, his words were echoed in quiet sobs and tears.

“In my 31 years as a faculty member and administrator at the University of Georgia, I cannot recall a time when we’ve suffered a loss of this magnitude,” he said. “The loss of any student is very difficult. A tragedy of this magnitude is truly devastating.”

In a morning press conference with local and statewide media, Morehead and other members of the UGA administration responded with solemn answers to reporters’ questions. In the afternoon, he led the campus community in the reflective gathering at the Tate Center. Speakers helped strengthen others as they stepped onto the podium to share their memories.

“Kayla and Christina, these two girls were life-lovers,” said Courtney White, Alpha Chi Omega chapter president. “They were compassionate, selfless, loving, caring, individual, unique, hilarious, dedicated, driven and spirited, and they were also best friends along with Halle and Brittany. If anything in this tragic situation is positive, it’s knowing beyond a doubt that these best friends met Jesus last night.”

All four students were involved in campus ministries and in Greek life—Kayla Canedo and Christina Semeria were sisters in Alpha Chi Omega, Halle Scott was a Delta Delta Delta and Brittany Feldman was a Pi Beta Phi.

“This is really tough, but y’all are making it a whole lot better,” said Halle Scott’s brother Will, who had planned to spend the weekend at home with his parents until he saw an announcement about the reflection ceremony and decided to turn around and attend. He was joined onstage by Nick Semeria, Christina’s brother.

“Christina loved to sing,” Nick said of his sister. “I have no doubt she’s leading the choir up there in heaven right now.”

“As a parent,” said Victor Wilson, UGA vice president for student affairs, “I can’t even imagine the pain and tragedy of a loss like this. Nothing we can say can ease the pain, but our being here says so very much.”

The comments continued to pour in, through wavering voices and the singing of the first verse of “Lean on Me.”

“We mourn the loss of these beautiful people.”

“These were incredible, incredible women, and they will be remembered.”

“There’s no community I’d rather be a part of than UGA right now. And when the breeze comes, that’s their presence.”

“We have four amazing guardian angels looking over us now.”

“I’m just confident that the life in their years has been profound.”

“With the support of the Bulldog nation, there is no doubt in my mind that we will overcome such a tragic loss.”

A large group of girls took the stage to talk about Kim, who works in Russell, a freshman residence hall. “Agnes Kim, our R.A., basically shoved us into a room on our first day of college and said, ‘go make friends,’ ” they shared.

Others asked for support and prayer for Kim during her hospital stay and in the coming months.

Morehead urged all members of the university community to care for each other during this difficult time.

“In this time of great sorrow, let us all draw together as members of the UGA community,” he said. “We extend our deepest condolences to the families and friends of our students, and we ask you to keep these students and their families and friends in your thoughts and in your prayers.”

Counseling services are available, as needed, at the University Health Center.