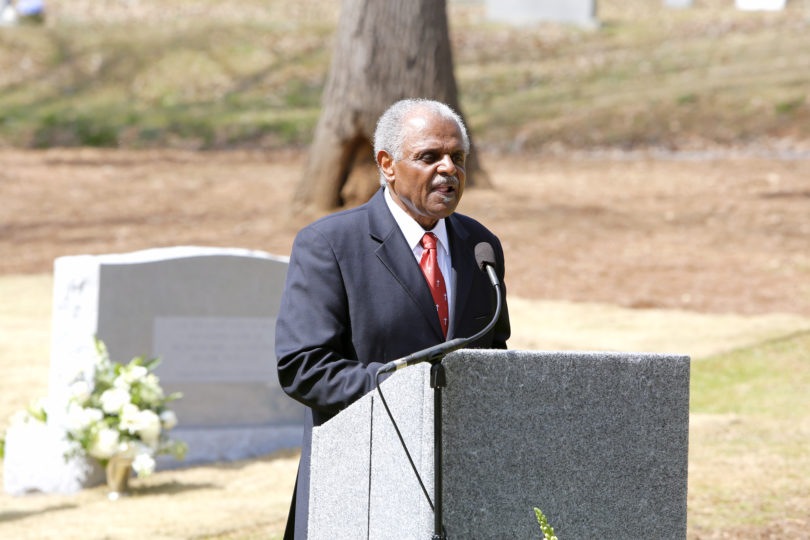 Remains from the 19th century discovered during Baldwin Hall expansion

Athens, Ga. – The Honorable Judge Steve C. Jones of the United States District Court for the Northern District of Georgia, the Rev. Dr. Winfred M. Hope of Ebenezer Baptist Church, West, and University of Georgia President Jere W. Morehead joined members of the community at Oconee Hill Cemetery today to pay tribute to the men, women and children whose remains were discovered during the construction of the Baldwin Hall expansion.

The remains of these unidentified individuals were meticulously catalogued and placed in 105 funeral boxes before they were laid to rest in Oconee Hill.

“Despite all that we do not know, it is our privilege to join together today – in complete reverence – to pay tribute to these individuals as they assume their final resting place in the historic Oconee Hill Cemetery,” Judge Jones said during the ceremony. “While we cannot call to mind their personal stories or life histories, we can hold these individuals with care and compassion in our hearts and in our minds.”

“This occasion provides all of us with an opportunity for meaningful reflection – reflection on the precious nature of human life, on the value of family and community, on the history of this place – Athens, Georgia – a place many of us here call home,” President Morehead said during the ceremony. “From the moment the first remains were discovered in November of 2015, the university’s guiding principle has been to treat these individuals with dignity and respect, and it is in that spirit that today’s ceremony was developed.”
Oconee Hill Cemetery will provide for the perpetual care of the reinterment site. This site is marked by a granite marker that reads:

Here lie the remains of 105 unknown individuals, originally interred during the 19th century. The vast majority of the 30 remains able to be identified were those of men, women and children of African descent, presumably slaves or former slaves. Others were of European and Asian descent. Their remains were discovered in November 2015 during the University of Georgia’s Baldwin Hall construction project adjacent to the Old Athens Cemetery. In March 2017, they were respectfully reinterred here.
May they continue to rest in peace.

University planners did not anticipate discovering remains on the Baldwin Hall site. Construction was delayed from November 2015 until February 2016, while archaeologists from Southeastern Archaeological Services Inc. and bioarchaeologists with the UGA Department of Anthropology worked to exhume the remains. Exploration and exhumation continued through the end of January 2017.

To be clear, archaeologists did not discover 105 bodies. Some sites were empty, indicating that individuals could have been moved previously. In addition, more than a century has passed, so most of the graves contained only fragments of skeletal remains. In some instances, only “human essence” was found – soil that is presumed to have biological material from the naturally decomposed remains of these individuals.

Throughout this entire process, the university has strictly followed the guidance of the State Archaeologist’s Office to reinter the remains individually, in a location close to the original burial site, and arranged as closely as possible to the original burial configuration so as to not inadvertently separate potential family members. The university was informed by the State Archaeologist’s Office that reinterment in Oconee Hill Cemetery was the most appropriate approach.

“From the first discovery of these remains on the Baldwin Hall site to their reinterment at Oconee Hill Cemetery, the University of Georgia has relied upon the expertise and direction of the State Archaeologist’s Office,” said Gwynne Darden, associate vice president for facilities planning and university architect, who is overseeing the Baldwin Hall expansion project. “Their experience has provided the university with the necessary guidance to care for the remains of these men, women and children in the most dignified, respectful and appropriate manner.”

Earlier today, the university announced that it will sponsor a second stage of interdisciplinary research, coordinated by UGA Vice President for Research David Lee, to build upon the preliminary analyses to understand better how these 105 individuals lived as well as their connections to the Athens community, including any ties to slavery. The university also announced that it will work with local leaders to explore new ways to collaborate in the community around priorities of mutual interest, such as education and economic development.