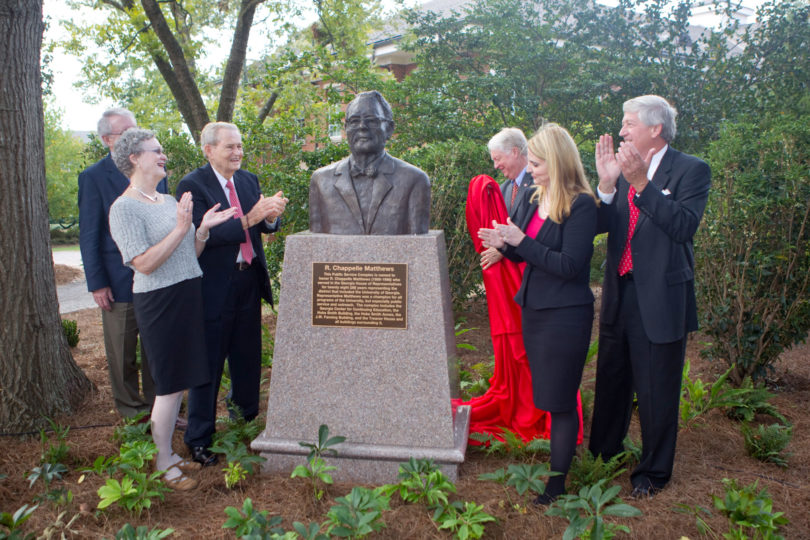 Matthews, who died in 1986, served in the Georgia House of Representatives for 28 years. His district included UGA. Through his office, he promoted the importance of education and became a champion for all programs at the university-with particular emphasis on public service and outreach.

“From literally the first week or two I was here until today, we’ve had something like this in mind,” said UGA President Michael Adams of dedicating the bust honoring Matthews. “He was truly one of those lifelong public servants.

“The legacy of the land grant [university] lives on at UGA because of the support that people like Chappelle Matthews gave.”

Matthews’ bust was designed by sculpture Jack Kehoe, an Emeritus Professor of Art at UGA. The project was primarily funded through private donations.

Born in Athens in 1908, Matthews graduated from UGA in 1933. After attending Southern Law School, he returned to Athens in 1934 to practice law, according to the Richard B. Russell Library for Political Research and Studies, which houses a collection of Matthews’ papers.

He was elected to the Georgia House of Representatives in 1949 and served on the rules and judiciary, agriculture, game and fish, Western and Atlantic Railroad, legislative and reappointment committees. He also served as chair of the university system committee.

In 1951, a constitutional amendment he sponsored passed, as did every other bill he personally sponsored. The amendment instituted a 3 percent sales tax to support public education. Actions like these earned him the titles of “Mr. University System” and “Mr. Higher Education” among his colleagues.

To recognize his contributions, UGA honored Matthews with the Outstanding Alumni Award in 1964 and the Distinguished Service award in 1970.

When Matthews retired from public service in 1976, he was dean of the House, signifying the longest-serving representative.

For more information on the collection of Matthews’ papers at UGA, see http://russelldoc.galib.uga.edu/russell/view?docId=ead/matthewsrc.xml.