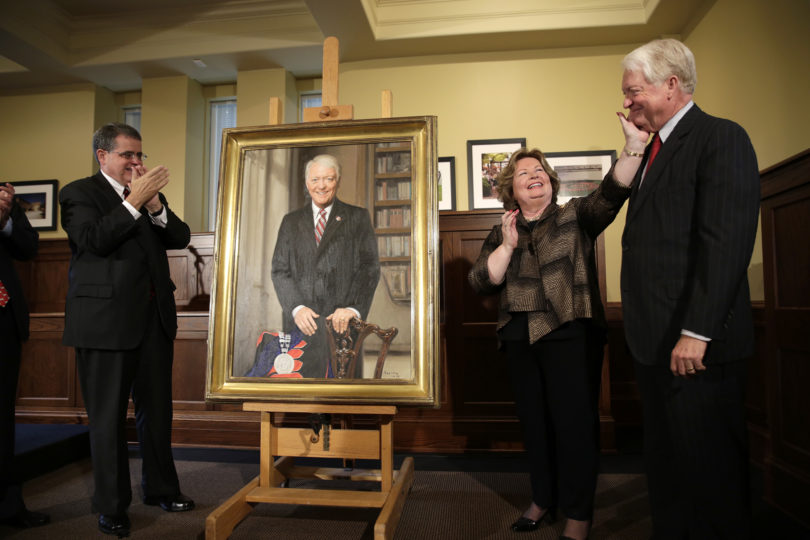 Athens, Ga. – The portrait of Michael F. Adams was dedicated Friday, Sept. 26 in the University of Georgia’s Administration Building. Adams served as UGA president from 1997 to 2013 and is now designated president emeritus.

“It is a tradition at the University of Georgia to honor former university presidents with a portrait that will hang in our historic Administration Building, the home of the Office of the President since 2000,” said President Jere W. Morehead at the ceremony. “Dr. Adams, we all are grateful for the 16 years you committed to serving America’s first state-chartered university, and we thank you.”

“One of my favorite authors, Wendell Berry, said, ‘The thing being made in a university is humanity.’ I believe he is correct,” Adams said. “The things that I will remember the most from my time here are the many friendships, the wonderful and collegial faculty relations on most days and the quality of students we are privileged to work with.”

Adams joined UGA after serving as president of Centre College in Kentucky for nine years. Under his leadership, the university established five new colleges and schools—the School of Public and International Affairs and the College of Environment and Design in 2001, the College of Public Health in 2005, the Odum School of Ecology in 2007 and the College of Engineering in 2012. He worked with the university’s partners in Augusta to bring medical education to Athens through the Georgia Regents University/UGA Medical Partnership in 2010. He also added academic programs in Gwinnett, Griffin, Tifton and Buckhead.

The university campus added 6.2 million square feet of building space under Adams’ administration. Improvements completed during his tenure include the Miller Learning Center in 2003; the Coverdell Center for Biomedical and Health Sciences in 2006; the Lamar Dodd School of Art, opened on East Campus in 2008; the Georgia Museum of Art expansion in 2011; and the Richard B. Russell Building Special Collections Libraries in 2012. Adams also helped the university establish permanent residential sites in Oxford, England; Cortona, Italy; and San Luis, Costa Rica.

“UGA took huge strides under Dr. Adams, and his record of accomplishment speaks for itself,” said John Spalding, chairman of the UGA Foundation.

“Mary and I care deeply about the future of this place,” Adams said in conclusion. “We wish all of you well who will carry on this great work. I truly believe that the future of this state and region is intricately intertwined with the health and leadership of this university.”