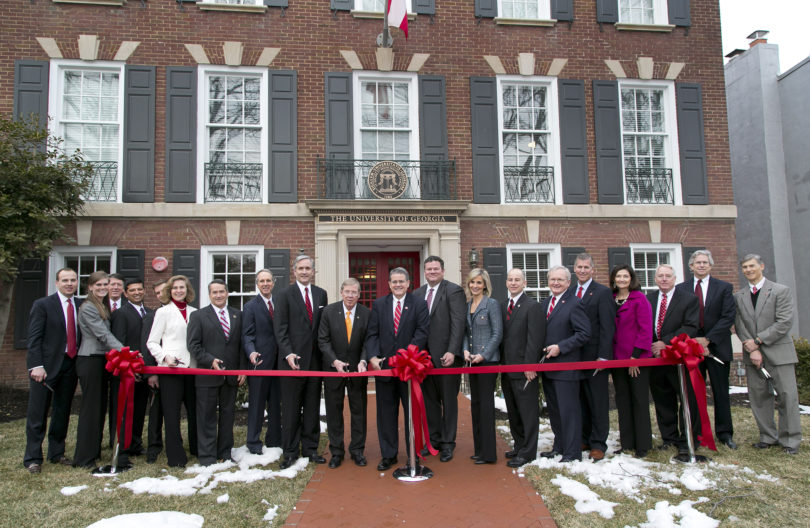 The three-story building, purchased in 2013 by the UGA Foundation, currently houses UGA students who are living and interning for various legislators and organizations in the nation’s capital.

“As you look around the building, one point will become immediately clear: Delta Hall is a premier facility, providing students with all of the amenities they need to live and learn in Washington, D.C.,” said UGA President Jere W. Morehead. “The true value of this facility, however, lies not in its design, but in the life-changing learning experiences it will facilitate for UGA students.”

UGA first established a presence in Washington, D.C., in 1997 with the start of the Congressional Agricultural Fellowship program. The university’s footprint expanded in 2002 with the introduction of the Honors in Washington program. Several other schools and colleges followed with their own academic and internship programs, and in 2008, UGA made internship opportunities in the city available to all undergraduate students through the Washington Semester Program.

The opening of Delta Hall marks the first time UGA students have been able to live, study and take classes under the same roof while interning in the nation’s capital. The building was named in honor of a $5 million grant from the
Delta Air Lines Foundation in support of UGA in Washington.

“One of the tenets of giving back at Delta, one of our pillars, is the importance of education,” said Tad Hutcheson, vice president of community affairs for Delta Air Lines. “We believe in giving back to education, and there is nothing better than contributing to this facility.”

The purchase and renovation of Delta Hall was a $12 million project funded by private gifts to the UGA Foundation and without a single state dollar, Morehead said. The facility enables UGA to enhance the quality of the student experience while providing significant cost efficiencies. Once a commercial office building, the 20,000-square-foot space is now capable of housing 32 students and additional faculty and staff.

“As I walk through this incredible facility, I am grateful that I live and study here,” said Torie Ness of Gastonia, North Carolina, a senior political science major and Washington Semester Program participant. “I have a 10-minute walk to the greatest deliberative body in the world.”

Ness is one of five students interning in the office of Sen. Johnny Isakson, who also spoke during the ceremony. A UGA alumnus who graduated in 1966 and served 17 years in the Georgia Legislature before being elected to three terms in the U.S. House of Representatives, he now is in his second term in the Senate.

“As I have gone along through my career in the Senate, time and again I find myself going back to Athens or going to the phone to call Athens or dealing with interns in my office who are from Athens,” Isakson said. “The University of Georgia has made a meaningful difference in my life and my career, and I owe it a debt that I can never repay.”

Delta Hall was built in 1931 and originally housed a church society and club. Before UGA’s renovations, it was home to the American Society of Interior Designers.

Funding UGA in Washington-the overarching name for UGA’s presence in the capital-has been a priority for Morehead and the UGA Foundation board of trustees as they seek to elevate the university to greater national stature.

“This dedication marks another strategic milestone in the growth of the University of Georgia in Washington, D.C.,” Morehead said.