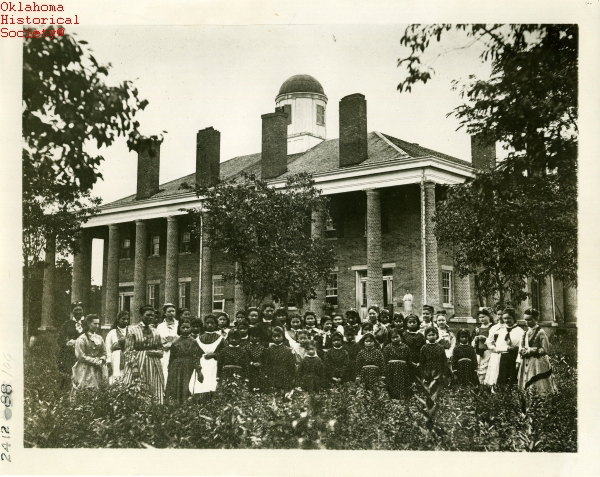 Cherokee women and girls in front of the building.

Athens, Ga. – On Easter Sunday morning in 1887, the first sparks began to spread through the Cherokee Female Seminary in Tahlequah, Okla. It did not take long for the wooden floors and walls to flash into flames, and soon only charred rubble remained.

Now, nearly 125 years later, a team from the University of Georgia led by Jace Weaver, director of the Institute of Native American Studies, has helped design and create a major exhibit of his team’s work at the site of the seminary. The show will open at the Cherokee Heritage Center in Tahlequah on May 16 and run through Aug. 7.

“The seminary originally opened in 1851, and it was the first institute of higher learning of any kind for women west of the Mississippi River,” said Weaver, who also is Franklin Professor of Religion and Native American Studies and adjunct professor of law at UGA. “There also was a facility for Cherokee men, and they opened a day apart.”

Along with Weaver, Ervan Garrison, professor of anthropology, and Alfie Vick, associate professor of landscape architecture, have worked on the archaeology of the remains of the Cherokee Female Seminary and the design and partial construction of a historically accurate ancient village on the site.

The exhibit traces the history of the Cherokee Female Seminary, describes how it (and the male school as well) closed in 1857, remained shuttered until the end of the Civil War in 1865 and then burned to the ground in 1887. It uses photographs and enlarged documents and also includes a film about the seminary, for which Weaver wrote the script and for which Vick and graduate student Kuo Guo provided computer-generated reconstructions of the building.

“The building had columns on the front and on the sides, in a style which came to be known as ‘Cherokee Doric,’ ” said Weaver. “The idea was to give the buildings what they called an ‘eastern look.’ “

The curriculum at the school was progressive for its day and included botany, rhetoric, music and mathematics, modeled on classes taught at Mt. Holyoke in Massachusetts. While there were no classes in such common 19th-century courses for women as home economics, one of the goals of the seminary was to educate “good wives for Cherokee leaders,” Weaver said.

The structures were large-47,000 square feet-and when they were renovated in 1877, they were the largest buildings in Indian Territory and the first to have central heat.

To prepare the exhibit and to help with an archaeological survey of the site directed by Garrison, Weaver needed the original plans of the Cherokee Female Seminary, but at first, no one knew where they were. After a painstaking research odyssey lasting more than two months, Weaver found a copy of the plans-in a special collections library not five miles from the site of the burned seminary itself.

“It’s a really beautiful thing, since parts of the floor plan had been hand-colored,” said Weaver.

His discovery of the original floor plans wasn’t the only eureka moment in the UGA team’s work on the seminary. A couple of years ago, Garrison, working with graduate student Jessica Cook Hale, performed a subsoil survey of the seminary, since the site of the new “historical village” is near the seminary’s original footprint, and no one wanted to disturb the area, which has never been excavated.

Using technology that allows them to “see” beneath the surface of the soil without disturbing it, Garrison and Hale discovered the walls of the old building-still in place where they should be, adjacent to the still-standing three columns.

“The images we found were astounding and now the site demands a lot more research,” said Garrison two years ago. “So it’s opening up an entirely unexpected avenue of study for UGA and local Cherokee students in the future.”

The exhibit has four parts: an introductory film; daily life at the seminary; the building itself, including the fire; and effects of the Civil War on the building and seminary life.

UGA’s entire effort in Tahlequah began with a May term class Vick taught some years back.

The Institute of Native American Studies at UGA is part of the Franklin College of Arts and Sciences. Information on the institute is available at http://www.instituteofnativeamericanstudies.com/index.php.