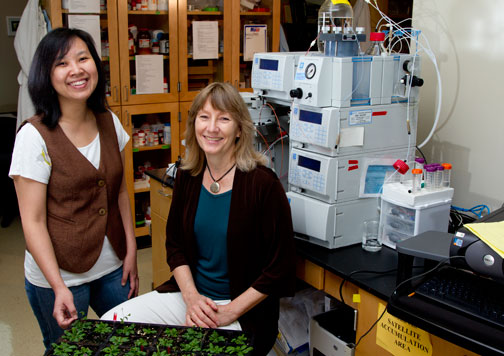 Athens, Ga. – University of Georgia researchers have discovered that two proteins come together in an unexpected way to make a carbohydrate, a chain of sugar molecules, in plant cell walls. This fundamental discovery changes the way scientists think about how plant cell walls are made and opens a new door to converting plants to biofuels and other carbon-based products.

In 2006, the UGA research team, led by Debra Mohnen, a faculty member in the UGA Complex Carbohydrate Research Center, discovered GAUT1, the first protein shown to synthesize pectin, a major component of the plant cell wall. Now Mohnen’s team has shown that GAUT1 and a genetically similar protein called GAUT7, which does not appear to have pectin-synthesizing activity by itself, form a critical part of a pectin-synthesizing protein complex.

Moreover, the two-protein complex may serve as a “core” complex that associates with additional pectin-synthesizing proteins to form still larger carbohydrate-synthesizing complexes in the plant cells.

The findings signify a “critical step in changing our view of how the plant cell wall is made,” said principal investigator Mohnen, a professor of biochemistry and molecular biology in the UGA Franklin College of Arts and Sciences. The study was published this week in the Proceedings of the National Academy of Sciences.

Mohnen also is a member of the BioEnergy Science Center, one of three Department of Energy Bioenergy Research Centers established by the DOE’s Office of Science in 2007. The centers support multidisciplinary, multi-institutional research teams pursuing the fundamental scientific breakthroughs needed to make the production of cellulosic biofuels derived from non-food plant fiber cost-effective on a national scale.

“Many people have overlooked the importance of pectins because they think pectins aren’t important in the thicker and stronger secondary plant cell wall,” said Mohnen. But, she said, “because pectins are synthesized in all plant cell wall types-not just in soft fruits, but also in wood and grasses that have tough and different outer walls-this new discovery makes it likely that modification of pectin will improve the availability of carbon reserves in the plant cell wall for renewable sources of energy.”

The new findings build on the UGA researchers’ 2006 discovery of GAUT1 in the model plant Arabidopsis. At that time, they also discovered 14 additional genetically similar proteins, one of which was GAUT7. But, said Mohnen, “Unlike GAUT1, GAUT7 didn’t have any of the pectin-synthesizing activity that we could detect.”

Nonetheless, the close association of the two proteins struck Melani Atmodjo-a UGA graduate student at the time and now a postdoctoral scholar-setting off the current research.

The UGA researchers and colleagues from the University of Copenhagen now have found that GAUT1 exists as a processed form within the Golgi, the cell organelle where pectin is synthesized before making its way to the plant cell walls. Typically, the processing would result in the secretion of GAUT1 from the cell, said Mohnen. Instead, the researchers found that the catalytic GAUT1 protein was tethered to the non-catalytic GAUT7 protein, so that the two proteins remained as a complex in the golgi.

By fusing various lengths of the GAUT1 protein to green fluorescent protein, the researchers observed that, indeed, GAUT7 anchored GAUT1 in the golgi.

The story became even more interesting, said Mohnen, when researchers used mass spectrometry and discovered 12 additional proteins that may interact with the GAUT1:GAUT7 complex.

Mohnen said the research makes clear the importance of protein complexes in the synthesis of pectins. “Looking to the future,” Mohnen said, “we can see how the plant cells could mix and match enzymes to make novel carbohydrates in the cell wall.”

Funding from the USDA National Institute of Food and Agriculture; the BioEnergy Science Center, supported by the Department of Energy Office of Biological and Environmental Research, DOE Office of Science; the Danish Agency for Science, Technology and Innovation; and the Villum Kann Rasmussen Foundation supported the research.

Note to editors: Images for this story are available for download at the following links:

http://multimedia.uga.edu/media/images/Mohnen_GUS_flower.jpg
UGA researchers demonstrated that GAUT1 and GAUT7, proteins in the plant cell wall, are co-expressed not only in the primary walls of plants, but also in the secondary walls and in many plant tissues, as demonstrated in this image of Arabidopsis flowers.