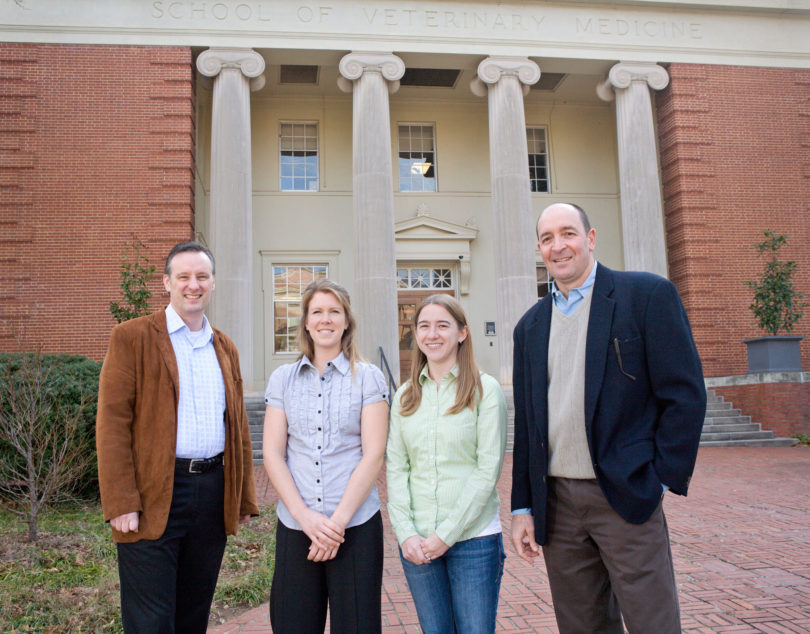 Athens, Ga. – Broken bones in humans and animals are painful and often take months to heal. Studies conducted in part by University of Georgia Regenerative Bioscience Center researchers show promise to significantly shorten the healing time and revolutionize the course of fracture treatment.

“Complex fractures are a major cause of amputation of limbs for U.S. military men and women,” said Steve Stice, a Georgia Research Alliance Eminent Scholar, animal and dairy scientist in the UGA College of Agricultural and Environmental Sciences and director of the UGA Regenerative Bioscience Center.

“For many young soldiers, their mental health becomes a real issue when they are confined to a bed for three to six months after an injury,” he said. “This discovery may allow them to be up and moving as fast as days afterward.”

Stice is working with Dr. John Peroni to develop a fast bone healing process. “This process addresses both human and veterinary orthopedic needs,” said Peroni, an associate professor of large animal surgery in the UGA College of Veterinary Medicine and a member of the RBC.

Peroni and Stice are leading a large animal research project funded by the U.S. Department of Defense. The project includes scientists and surgeons from the Baylor College of Medicine, Rice University and the University of Texas, who conducted the early studies.

Engineering new bone
“Healing of critical-size defects is a major challenge to the orthopedic research community,” Peroni said. “Large-bone defects must be stabilized and necessitate technologies that induce rapid bone formation in order to replace the missing tissue and allow the individual to return to rapid function. To date, no single material can suffice.”

The group they lead is a multidiscipline and multi-institutional group actively working on bone tissue engineering.

“Our group has been working productively together on numerous projects through the last several years,” Stice said, “So, a collegial relationship and successful collaborative working relationship is already established.”

Between 2009 and 2011, the collaborations received a $1.4 million grant from the DOD for the use of stem cells in fracture healing to be tested in sheep.

“In our experiences with large animal models, following the guidelines established by our animal care and use committee,” Stice said, “we have been successful in formulating a product that contains mesenchymal stem cells and allows them to survive in the environment of the fracture long enough to elicit the rapid formation of new bone.”

This year, the group showed bone can be generated in sheep in less than four weeks. The speed in which bone is formed is one of the truly unique features of this study.

Fracture putty
To start the bone regeneration process, the RBC used adult stem cells that produce a protein involved in bone healing and generation. They then incorporated them into a gel, combining the healing properties into something Stice calls “fracture putty.”

With Peroni’s assistance, the Houston-based team used a stabilizing device and inserted putty into fractures in rats. Video of the healed animals at two weeks shows the rats running around and standing on their hind legs with no evidence of injury. The RBC researchers are testing the material in pigs and sheep, too.

“The small-animal work has progressed, and we are making good progress in large animals,” he said.

More work is needed to get to human medical trials, but the threat of losing federal funding for biomedical work through the DOD means they will have to find new ways to fund the project.

Next steps
“The next step is to show that we can rapidly and consistently heal fractures in a large animal,” Peroni said, “then to convert it to clinical cases in the UGA [College of Veterinary Medicine] clinics where clinicians treat animals with complex fractures all the time.”

Once they have something that works for animals, it will be passed over to the DOD for human use.

Peroni, who is chairman of the North American Veterinary Regenerative Medicine Association, is hopeful this material will be promoted to the veterinary and human medical fields through the educational efforts of NAVRMA and the RBC.

However, the RBC isn’t the only group working on a faster fix for broken bones.

“Our approach is biological with the putty,” Stice said. “Other groups are looking at polymers and engineering approaches like implants and replacements which may eventually be combined with our approach. We are looking at other applications, too, using this gel, or putty, to improve spinal fusion outcomes.”

One of the best hopes for the fracture putty is in possible facial cranial replacements, an injury often seen on the battlefield.

The project ends in mid-2012. “By then we are to deliver the system to the DOD,” Stice said.