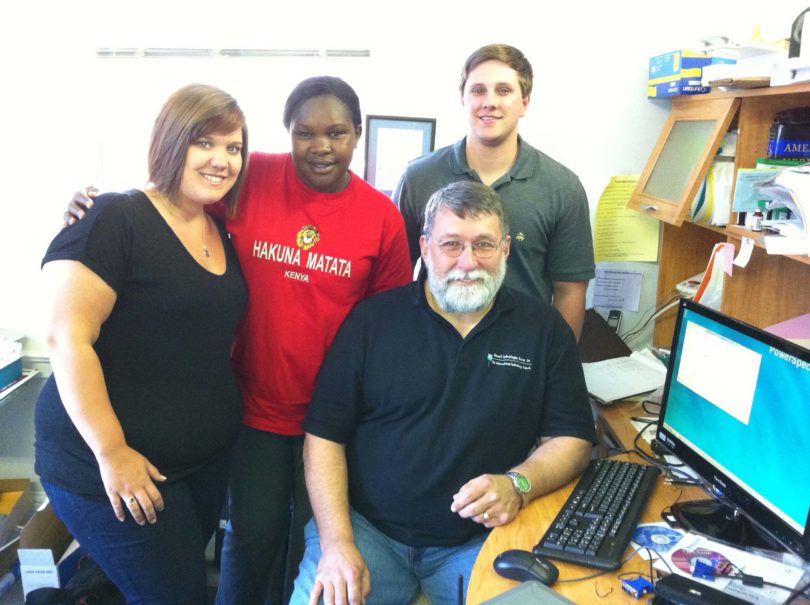 Athens, Ga. – In an example of service learning, a team of four students in a University of Georgia education class recently designed and implemented a wireless network system for the Athens Nurses Clinic that now allows medical practitioners to share information about the clinic’s patients more rapidly and efficiently.

The project began when Paul Matthews, assistant director of UGA’s Office of Service Learning, asked College of Education assistant professor and engineering faculty member John Mativo if his class, network design and administration for workforce education, would participate in a service learning project to help HandsOn Northeast Georgia. There were several needs identified, but the one that best fit the course was the ANC project.

ANC, one of only four free clinics in Northeast Georgia, has been providing free health care to the homeless and low-income uninsured residents in the Athens area since 1991. The clinic cares for about 2,000 patients a year.

Everett Long, a UGA doctoral student in public health who works as ANC project director, was invited to Mativo’s class to explain about the needs of the clinic. The clinic had no networking system to allow medical practitioners to access and share patient records quickly and efficiently.

The task, therefore, was to design and implement a computer network so the clinic could begin to use a medical records system that was provided for them in a grant.

The UGA team-a mix of undergraduate and graduate students- which included Sallie Holloway, Felisters Kiprono, Will Hearn and Eric Howell, visited the clinic and analyzed what was needed.Throughout the project, they consulted with both Long and Paige Cummings, the clinic manager.

The team considered alternative systems versus clinic needs.The course materials, together with student enthusiasm and knowledge, helped guide the development of the network design. After only two months, the team presented the final design to the ANC and after its approval, computers were purchased, and the team implemented a wireless network.

The hardest part of the network design was in the selection of the hardware, group members said. Even though the clinic had been awarded a substantial grant, the design and the selection of hardware had to adequately support the operation and allow for scaling while being cost effective. In addition, they had to consider ongoing support of the network system. If the clinic could not maintain the system, it would not be effective for long-term operations.

The class (EBUS 5080/7080) is open for anyone at the university. “I have students from computer science and from the [Terry] College of Business who take it as well,” said Mativo, an instructor in the College of Education’s department of workforce education, leadership and social foundations.

The ANC is located at 496 Reese St. It is a nurse practitioner-based family practice clinic. Patient visits, lab test, medications and personal hygiene kits are provided free. Acute care walk-in and first-time patients are seen at 8 a.m. Appointments begin at 9 a.m. The clinic is open four days a week, from 8 a.m. to 1 p.m. It is also open on designated Fridays for dental care.

“This project is an example of cooperation between the community and UGA towards bettering the lives of its citizens,” said Mativo.

For more on the clinic, see www.athensnursesclinic.org.