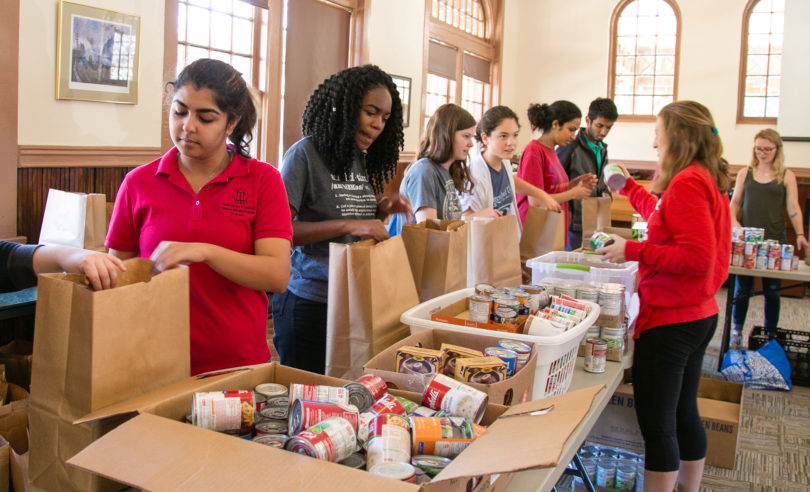 More than 225 UGA employees fanned out across Athens-Clarke County, contributing 550 total hours of service to nonprofit organizations during the Public Service and Outreach second annual Day of Service on Nov. 18.

In addition, PSO and Cooperative Extension employees in other counties also participated in projects in their communities.

Projects ranged from installing compost bins at local middle schools, cleaning the kitchen at the Athens Area Homeless Shelter and clearing trails at Dudley Park. In all, there were
14 service projects in Clarke County for employees to choose from.

At the Sweet Olive Animal Rescue Farm in Winterville, five public service and outreach employees helped dig holes for fence posts. Co-founder Kat Howkins was so excited to have a full crew working on her farm, she brought them cinnamon rolls as a treat.

“It allows us to fulfill projects we just can’t do as two people trying to run this place,” Howkins said. “We have volunteers but having a dedicated, sophisticated group of workers is amazing. They have put in those fence posts in the last hour. It’s so awesome.”

In Athens and across the state, 105 employees collected supplies for local schools. Across campus, employees collected canned goods for Campus Kitchen at UGA’s annual Turkeypalooza, which provided a Thanksgiving dinner to food-insecure seniors and their families. The State Botanical Garden of Georgia, a public service and outreach unit, collected the equivalent of 5,500 pounds of food (including cash gifts) winning the campus collection competition.

Vice President for Public Service and Outreach Jennifer Frum began her day at Hilsman Middle School where she used a power drill to help co-workers from the J.W. Fanning Institute for Leadership Development and the Office of Service-Learning build a wash-and-weigh station for produce grown in the school’s garden.

Frum worked alongside Shannon Wilder, director of the Office of Service-Learning, which coordinated the Day of Service, measuring wooden boards to be cut. Wilder said the project is a tangible reminder of how important her daily work is.

“I think we’re wired to try to make a difference,” Wilder said. “We think about that every day as we come to work and how what we do really matters to the state of Georgia. Days like this are days that we can really see the impact that we’re having.”

That was obvious at Dudley Park, too, where massive piles of branches were stacked on the banks of the Oconee River. Volunteers, including the Carl Vinson Institute of Government’s Scott Pippin, took a brief break for a group photo in the warm late afternoon.

Pippin, who works with planners across Georgia, said he enjoyed the manual labor. It was different to see an immediate physical product instead of working in the office on projects that may take years to complete.

“It’s great to actually see what you’ve done in a day instead of the long-term vision of the stuff we normally work on,” he said. “It’s an immediate gratification of feeling like we did something today that made a difference.”

UGA Public Service and Outreach includes the Archway Partnership, the Carl Vinson Institute of Government, the J.W. Fanning Institute for Leadership Development, the Georgia Center for Continuing Education and Hotel, Marine Extension and Georgia Sea Grant, the Small Business Development Center, the State Botanical Garden of Georgia and the Office of Service-Learning, which also reports to the UGA vice president for instruction.