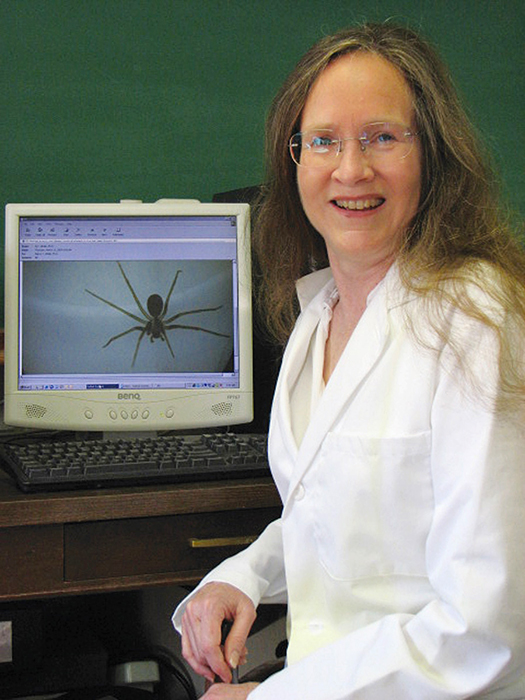 Athens, Ga. – University of Georgia entomologist Nancy Hinkle has built a career as a well-respected veterinary entomologist, but it’s her work with “invisible” insects that gained her esteem outside academia.

This fall, the Entomological Society of America presented Hinkle with its 2014 Recognition Award in Urban Entomology for her studies of insects considered pests in the human environment—including pests that are sometimes imagined.

Hinkle has worked as a medical-veterinary entomologist in the UGA College of Agricultural and Environmental Sciences’ entomology department since 2001, primarily with insect pests that affect the poultry industry. Over her career, she also has researched various insects that affect humans—from fleas to head lice to mosquitoes.

Because of her interest in blood-sucking insects, Hinkle has become one of the nation’s leading experts on delusional parasitosis, a psychological condition in which the individual believes to be infested with insects despite the fact that there is no evidence of infestation.

“She’s kind of a focal point for professionals who work with people affected by this condition,” said Wayne Gardner, a fellow UGA professor of entomology who nominated Hinkle for the award. “She broke it down and talked about the different issues that can cause it.”

Her interest in the subject started in the 1980s when her doctoral adviser at the University of Florida—flea researcher Philip Koehler—received a sample he did not have time to identify. He handed it off to Hinkle, who spent hours trying to identify the insect only to realize later that there was nothing in the sample to identify.

With funding from the Florida Entomological Society, Hinkle found that it wasn’t uncommon for pest control operators and labs to be asked to solve imaginary pest infestations.

As an Extension entomologist, she often received—and still receives—calls from worried individuals who believe they are infested with an unknown skin parasite. This condition is sometimes found in people with no other signs of mental illness or substance abuse.

“It is always gratifying to be recognized by one’s peers,” said Hinkle, who won the society’s regional Recognition Award for Urban Entomology in spring 2014. “My advantage is working on pests everyone dislikes—fleas, ticks, lice, mites, spiders and such.”

In addition to her work with human and animal ectoparasites and delusory ectoparasites, Hinkle maps the geographic range of brown recluse spiders in Georgia and illustrates how rare the feared spiders are in the state.

Currently, Hinkle is working on control methods for avian mites, pest flies and darkling beetles that carry salmonella and can transmit the bacteria among poultry flocks. In 2012, she received the lifetime achievement award from the Livestock Insect Workers Conference for her work with poultry and cattle parasites and pests.

“Dr. Hinkle’s primary responsibility is working with the poultry industry and with veterinary or medical entomology (research), but in this work she encounters a number of problems that affect our urban clientele,” Gardner said.

“Even though it’s not her primary responsibility, Dr. Hinkle works to address each of those problems brought to her, and she addresses them quite effectively.”

Since her interests span the worlds of veterinary, agricultural and urban pest problems, Hinkle frequently addresses pest management conferences around the country. She has made more than 300 presentations to pest control groups, including 22 state associations, the National Conference on Urban Entomology, the Purdue Pest Management Conference and the National Pest Management Association.

For more information on the UGA entomology department, see www.ent.uga.edu.