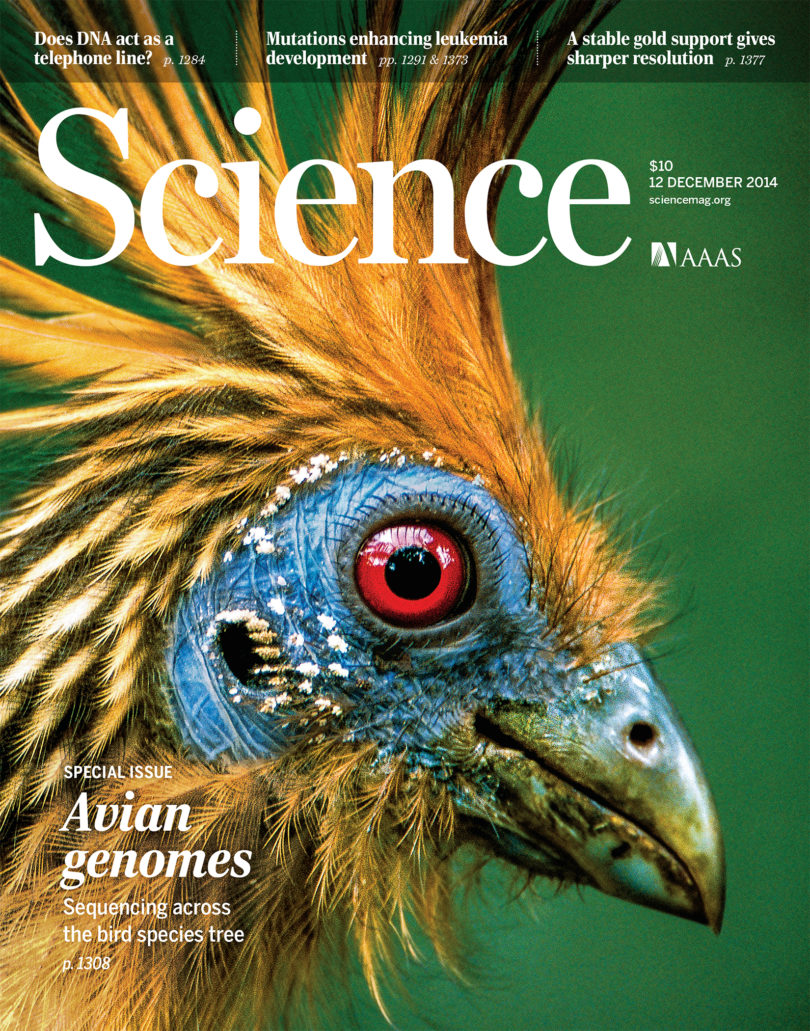 Athens, Ga. – Using new computational methods developed by the University of Georgia’s Liang Liu, Travis Glenn and others, an international team of scientists was able to shed light on an obscure period of avian evolution and further untangle the bird family tree.

Members of the Avian Phylogenomics Consortium—composed of 200 researchers from 80 institutions and 20 countries—have sequenced and analyzed the genomes of 48 species of birds and three species of crocodiles to better understand the fundamental evolutionary events that led to feathers, flight and song.

The consortium simultaneously published 28 papers this past week—eight papers in a special Dec. 12 issue of Science and 20 more in Genome Biology, GigaScience and other journals.

Glenn, an associate professor of environmental health science in the College of Public Health; Liu, an assistant professor in the department of statistics and Institute of Bioinformatics in the Franklin College of Arts and Sciences; and John Finger Jr., a doctoral student in the Interdisciplinary Toxicology Program and College of Public Health, were co-authors on two of the eight papers published in Science.

The first of these two papers, “Whole genome analyses resolve the early branches to the tree of life of modern birds,” creates the most reliable tree of life for birds to date.

“This is one of the most challenging problems in evolutionary biology because these groups diverged in a very short period of time, quite a long time ago—about 66 million years ago, shortly after dinosaurs became extinct,” Glenn said.

Statistical tools developed by Liu were used to analyze the genome-scale DNA sequences at the center of this new research. These new methods provide more robust results than traditional approaches in understanding the history of species, especially when the evolutionary diversification of ancient species occurred in a very short period of time.

“These methods are to key to solving the puzzle about relationships among birds because they are designed to overcome the problems associated with short bursts of speciation, even when they happened long ago,” Liu said.

Glenn and consortium colleagues developed a new genomic tool used in this research, ultraconserved elements, or UCEs, which consist of short DNA sequences that are nearly identical in birds, reptiles and humans. The conserved core sequences make it easy to find the DNA regions of interest, and the sequences adjacent to the core contain the information used in the analyses.

“We used UCEs to understand how different birds are related to each other, making it easier to make apples-to-apples comparisons of DNA sequences among all birds as well as their distant relatives,” Glenn said.

Along with revealing the evolutionary relationships of major groups of birds, the team also showed that protein-coding DNA, long thought to be among the best regions to use for such research, is actually biased and thus indicates the wrong relationships. UCEs and introns—non-protein coding DNA strands—produce much more reliable results.

In the second Science paper, “Three crocodilian genomes reveal ancestral patterns of evolution among archosaurs,” Glenn, Finger and consortium colleagues also used UCEs to compare the rate of molecular evolution of all major groups of tetrapods, the superclass of four-limbed vertebrates that includes amphibians, reptiles, birds and mammals.

The team’s findings not only revealed that crocodilians evolved at remarkably slower rates compared to other tetrapods, but allowed the researchers to reconstruct the genome of the archosaurs, the early ancestors of birds, crocodiles and dinosaurs.

Glenn and Finger worked with researchers at the UGA Savannah River Ecology Laboratory near Aiken, South Carolina; the Louisiana Department of Wildlife and Fisheries; the University of Sydney; and Darwin Crocodile Farm in Australia to obtain alligator and saltwater crocodile samples used in the project.

“Co-authoring a publication in Science is a great graduation gift,” Finger said. He is receiving his doctorate at Commencement ceremonies this Friday and then returning to Australia to continue research on crocodiles.

“This project clearly shows what can be achieved through large-scale collaborations,” Glenn said. “We have built upon a decade of collaborations with many UGA faculty, students and alumni, as well as other colleagues from around the world, to solve many long-standing questions in evolutionary biology and provide the foundation for further research in public health.”