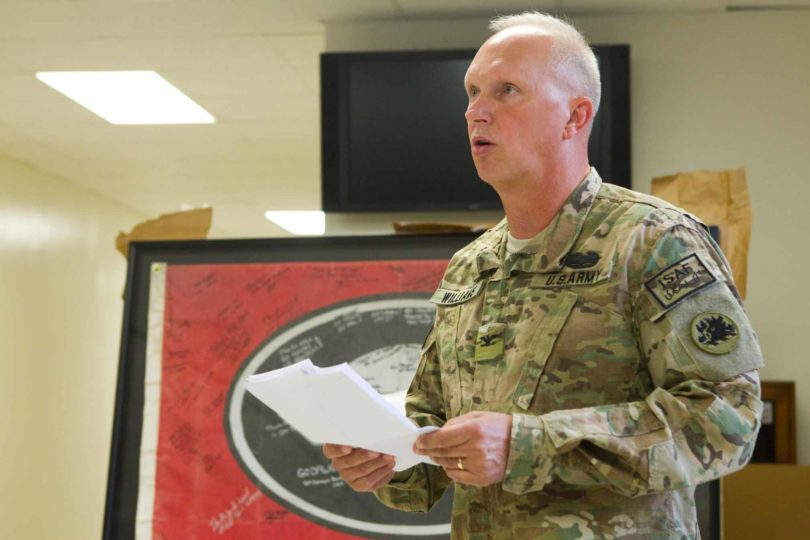 Col. Bill Williams III presents the University of Georgia flag flown over the National Guard barracks in Afghanistan to the College of Agricultural and Environmetnal Sciences on Monday

Athens, Ga. – A University of Georgia flag flown over the Afghanistan barracks of Georgia National Guardsmen returned to campus June 11. Scott Angle, dean of UGA’s College of Agricultural and Environmental Sciences, and Steve Brown, associate dean for extension, accepted the flag from Col. Bill Williams III, commander of the guard unit on a mission to revitalize the war-torn country’s agricultural industry. The flag was presented to the guard following an agricultural training held last year in Athens.

“I made a commitment to fly the flag, sign it and return it. Today brings closure to that commitment,” Williams said to the group of faculty, elected officials and military personnel gathered in Conner Hall for the ceremony.

“We are glad to be a very, very, small part of your success,” Angle said to the guardsmen. “We are a very applied college-and as it turns out this is exactly what the people of Afghanistan need. We focus on helping people have better lives, and we are very proud that we’ve been able to extend this capability to people far from Georgia.”

The flag was raised above the guards’ barracks in the eastern Afghanistan Logar province on June 16, 2011, where it flew until Aug. 12, 2011. The flag was signed by 55 members of the 201st Agribusiness Development Team. The team included four UGA graduates: Gary Church, Warnell School of Forestry and Natural Resources; Carmen Benson, CAES; George McCommon, CAES and College of Veterinary Medicine; and Catherine Tait, College of Education.

The team trained with CAES experts in Athens Feb. 13-18, 2011. During their visit, the guardsmen learned about agriculture-related topics such as irrigation, crop production, pest management, soils assessment, livestock management and food storage.

“Before we could get to Afghanistan, we had to prepare for our mission,” Williams said. “I reached out to UGA and asked for their assistance. Proper training and preparation leads to confidence, and confidence, along with the right skill set and passion, leads to success. We had a very successful mission in Afghanistan. And UGA is part of that success story.”

ADT I was the first of three units sent to Afghanistan from Georgia to increase agricultural education. CAES trained the second team, which is currently deployed, in November 2011.

“It was our pleasure to arm the Georgia National Guard with the information they needed to accomplish their mission in Afghanistan,” said Brown, who led the ADT trainings. “We are staying in touch with these teams throughout their deployments and the feedback they have provided is valuable to us as well. We are grateful to Col. Williams for taking the time to acknowledge our contributions and are grateful to all the soldiers for the sacrifices they made to serve our country.”

While Williams admits the most important part of the mission was accomplished when all members of the team, based at Fort Gordon in Augusta, returned safely home at the end of April, the team made improvements to the agricultural industry as well.

“When we got in the country, we learned that the Afghan people knew how to farm, maybe not as sophisticatedly as we do, but they knew the basics,” Williams said. “But, they do not do a good job at storing, marketing or selling their products. When they harvest their produce, like apples and onions, they flood the market and don’t get much money. What they can’t eat or sell initially rots in the fields.”

The team taught food preservation techniques like canning and dehydrating and led trainings on how to make and use simple juicers to develop additional products that could be preserved and sold. Using root cellars to store produce underground, farmers were taught how to keep food fresh and delay selling the food until the market was less flooded. Introducing the concept of fruit grading, or quality sorting, showed the farmers how to earn additional money for their produce as well.

“They grow a lot of good onions, and we showed them how to increase their profit by 200 percent, just through proper storage,” Williams said.

All members of the ADT volunteered to be a part of this team. A sincere desire to help the Afghan people improve their farming practices and better their lives-and the future of their country-is at the heart of the mission.

“The biggest reward we had was the knowledge we were able to transfer and the relationships we built were just wonderful,” Williams said. “Leaving was bittersweet. To look at a fellow man and see a twinkle in his eye lets you know you made an impact, and that is how we grade success.”

Williams will retire from the guard at the end of July. But, several members of the original ADT will return to Afghanistan when the third team deploys next year. CAES will train ADT III the week of Sept. 23 on the UGA campus in Tifton.