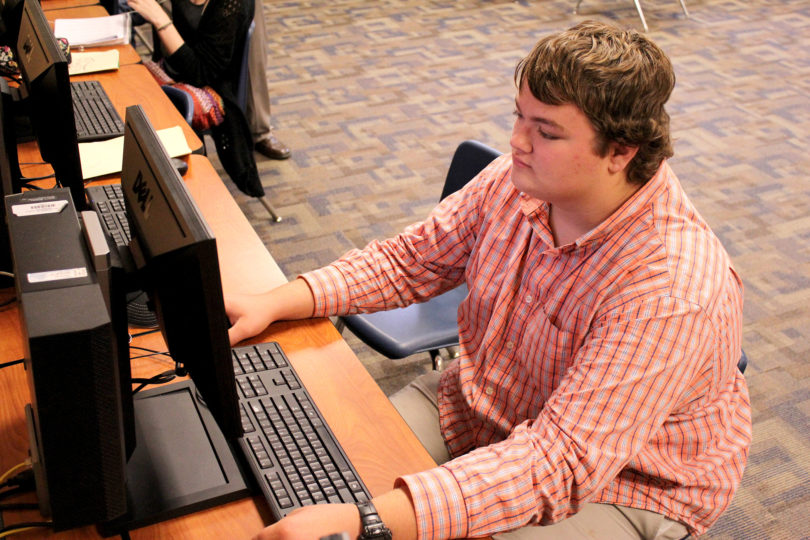 The Foothills Education Charter High School, which was approved by the Georgia Department of Education in October 2014 and opened its virtual doors to students this fall, hosts Internet-based classes at sites around North and Middle Georgia. Classes are taught in the evenings and at each student’s pace, allowing for maximum flexibility in the face of barriers such as work or child care.

“For some kids, regular high school works perfectly,” said Sherrie Gibney-Sherman, an assistant professor in the department of lifelong education, administration and policy in the UGA College of Education and executive director of Foothills. “But for other kids, they have to work during the day, or they have children of their own and they can’t get child care during the day. Some are just frustrated with high school and all the drama, and just want to get it done.”

Gibney-Sherman says Foothills began recruiting students last year by working with its five partner school districts in Barrow, Baldwin, Clarke, Jackson and Madison counties to identify students who might benefit from the program, and also set up the program at two state prisons. Academic counselors met with about 750 students who signed up online and determined what courses they needed to graduate.

Classes take place in school buildings-because the school opens in the evenings, it can share space with traditional schools-and each class has a certified teacher who can work with the students if there is a question. But courses are individualized and online; students are encouraged to work at their own pace.

As a result, 930 students between the ages of 15 and 21 are now working toward a high school degree.

“It is a game-changer,” said Gibney-Sherman. “Some had given up hope that they would ever get a high school diploma. Now they are going to get one.”

That’s the case with James DeFoor, 18, an Athens resident whose parents withdrew him from a traditional high school after he ran into some trouble and his grades suffered. “I really just wanted to get a fresh start,” said DeFoor, who now takes online classes in a building that by day is Classic City High School. He recently finished his economics and environmental science classes, and is working through world history, mathematics and literature.

“I guess I’m more motivated this year,” he says, adding that he would tell other students like him “that there is hope. Don’t be discouraged. You can’t do it if you don’t give it a shot.”

In addition to working at their own pace, Foothills students have access to a wealth of social service supports. Each site includes a room dedicated to social services, said Kelly Girtz, regional director for student services, and there are plenty of opportunities for students to create a personalized plan not only for their education, but for life. “We’re working one-on-one with the kids; that’s a big part of our program as opposed to traditional high school,” he said.

Foothills has already graduated several students, and will soon be working out a continual schedule to celebrate the ongoing achievements.

“We’ve recovered kids who never thought they’d make it,” said Gibney-Sherman. “Many of these kids are very smart and very capable-they just didn’t think they could ever make it. We now have more kids with a high school diploma who are more employable.”