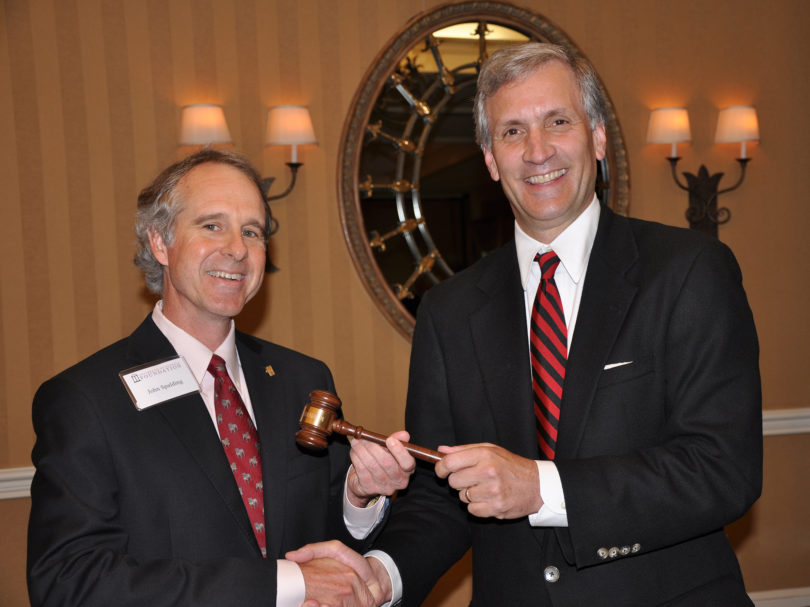 Board also welcomes a slate of advisory and ex-officio trustees; accords emeritus status to outgoing board members

Athens, Georgia (June 25, 2013) – The University of Georgia Foundation today announced changes in leadership and board positions voted upon at its recently concluded annual meeting. Most notable among the actions is that its board voted unanimously to elect John P. Spalding as chairman effective July 1, 2013 and running through June 30, 2015. He succeeds Bill Young, Jr. who served the foundation in two separate terms from 2007 to 2009 and 2011 to present.

“It has been a privilege to work with John on so many levels,” Young stated. “His consistent and thoughtful approach helped immensely when we were considering the merger two years ago and his work as vice chairman was reassuring to me as the University of Georgia Foundation entered a new era. I’m confident that the foundation is going to be in good hands.”

Spalding inherits chairmanship of a foundation whose endowment grew during Young’s term by more than $125 million to $800 million despite a very challenging economic climate.

“With a steady hand and a great sense for business, Bill was the perfect choice to lead this foundation for the last two years. I am honored to have been vice chair during his term and offer my personal thanks for his service to the university and the foundation,” Spalding noted.

Ken Jackson, who by UGA Foundation bylaws will be the next chairman, is executive vice president and chief financial officer for floor covering giant Shaw Industries. He holds bachelor’s and master’s degrees in accounting from the Terry College of Business.

Jack Head is a 1977 graduate of the Terry College of Business and is president of Atlanta-based Head Management Group, an industry leading developer and manager of industrial, commercial and residential properties.

Bill Douglas is executive vice president and chief financial officer for Coca-Cola Enterprises, the world’s largest bottler of Coca-Cola products. He earned a BBA in accounting from the Terry College of Business in 1983.

Managing Trustees:
Garry Bridgeman is a first vice president, investments, and a private wealth advisor for Merrill Lynch in Atlanta. He heads the Bridgeman Group as part of Merrill Lynch’s Private Banking and Investment practice. In that capacity, he provides investment consulting and wealth management services to clients with a minimum of $10 million in investable assets. Garry served the foundation ably as a trustee from 2005 to 2012 and accepted an invitation to be placed before the board for election to a new term commencing July 1, 2013.

Stephen Joiner is fulfilling the unexpired term of Don Waters. Stephen is a regional managing partner, in the Southeast Division of Deloitte & Touche’s Mergers and Acquisitions Services Group in Atlanta. He also serves on the company’s US Mergers & Acquisitions Leadership team, overseeing the Mergers and Acquisition department’s industry programs and the US member firm’s strategic buyer program. Prior to joining Deloitte, Stephen was a partner with Arthur Andersen in Atlanta. He is a 1986 graduate of the Terry College of Business where he earned his BBA in accounting.

Steve Jones is a U.S. District Court Judge in Atlanta and past president of the UGA Alumni Association. As such, Judge Jones is concluding his term as an ex-officio trustee of the UGA Foundation and accepted an invitation to continue his work in the capacity of a managing trustee. He has served the United States District Court, Northern District of Georgia since 2011. Prior to his federal appointment, Judge Jones was as a Superior Court Judge serving Athens and Clarke and Oconee Counties. He has served on the University of Georgia’s Athletic Board, is a former chairman of the University of Georgia School of Law’s Board of Visitors and the Georgia Judicial Qualifications Commission. Judge Jones earned both his BBA (’78) and JD (’87) from the University of Georgia.

Cliff McCurry is fulfilling the unexpired term of Sheffield Hale. He is a Chartered Property Casualty Underwriter (CPCU) who has been a vibrant force in the Savannah insurance and business community for more than 40 years. Cliff presently serves a vice chairman of Savannah-based Seacrest Partners where he oversees the firm’s business development activities. Seacrest is a privately held insurance brokerage and employee benefits consulting firm serving a wide range of clients with complex property/casualty, employee benefit and personal insurance needs. Cliff earned a BBA in business administration and management from the Terry College of Business in 1971.

Barry Storey is completing a term as an advisory trustee and transitions into a managing trustee position on July 1. Storey is a co-owner of Hull Storey Gibson Companies, an Augusta-based real estate acquisition, management and development firm which primarily acquires enclosed malls and shopping center properties throughout the South and develops “big box” shopping centers. He is a 1982 graduate of the University of Georgia where he earned a BSA in Agriculture Economics.

Advisory Trustees:
Mark Chandler is president and founder of Habersham Properties, an Atlanta property management and brokerage firm. Mark earned a BBA from the Terry College of Business in 1981, is a certified public accountant and has held a real estate license with the Georgia Real Estate Commission for more than 15 years. He has been an active real estate investor for more than two decades.

Richard W. Courts IV is a principal in the Atlanta-based Atlantic Realty Company, a privately held commercial real estate firm which has served clients since 1936. Richard is the son of Richard and Lynda Courts, both of whom are emeritus trustees of the foundation and both of whom are past chairs: Richard from 1990 to 1992 and Lynda in 2004 and 2005.

John Mangan is a private investor who resides in Charlotte. He is a 1982 graduate of the University of Georgia where he earned a BBA in finance from the Terry College. John was a four year letterman, two-time All-SEC and a 1981 All-America on UGA’s powerhouse tennis teams under legendary coach Dan McGill. He is one of the players that helped propel the men’s tennis team into national prominence. Those teams earned three SEC Championships and four consecutive NCAA Tournament bids while posting an astonishing record of 104 wins and only 19 losses from 1979 through 1982.

Ted McMullan is president and chairman of Atlanta-based Covington Investments a privately owned firm whose related companies own and operate senior living communities in Florida, Ohio and Tennessee. Ted is the son of John and Marilyn McMullan. His father presently serves as a managing trustee of the University of Georgia Foundation and chairs the Audit Committee

Susan D. Sherman, a Jacksonville native, is president of Susan Sherman Inc., a St. Louis, Missouri-based marketing, special events and public relations company. She is a 1982 Broadcast News graduate of the Grady College of Journalism and went on to work for the Atlanta Ballet and the Atlanta Symphony Orchestra before hosting the PBS TV series State of the Arts and prior to working in CNN’s Paris bureau.

Austin Laufersweiler is the University of Georgia student body president succeeding Will Burgess.

Ryan Nesbit is interim vice president for finance and administration, succeeding Tim Burgess who is retiring.

Tim Keadle is the incoming president of the University of Georgia Alumni Association succeeding Steve Jones.

“I am truly excited to have an opportunity to work with the new folks that are joining the board,” said Spalding. “Their combined talents complement those of a board that has an outstanding depth of experience, all of which helps us fulfill the foundation’s primary objective of supporting and enhancing the University of Georgia’s academic mission.

“While I am sad to see several of our good friends leave the board as their terms expire, it’s always exciting to see and hear the diverse perspectives new trustees bring to the organization,” Spalding added. “My sincerest thanks to our outgoing board members for their hard work and dedication, and welcome to our newest trustees, we look forward to your coming successes.”

“We are tremendously thankful to have had the privilege of working with this group of professionals,” said outgoing Chairman Bill Young, Jr. “They contributed greatly to the growth and success of the University of Georgia Foundation through their gifts and their service and I hope they will remain engaged with the university and the foundation in the years to come as emeritus trustees.”