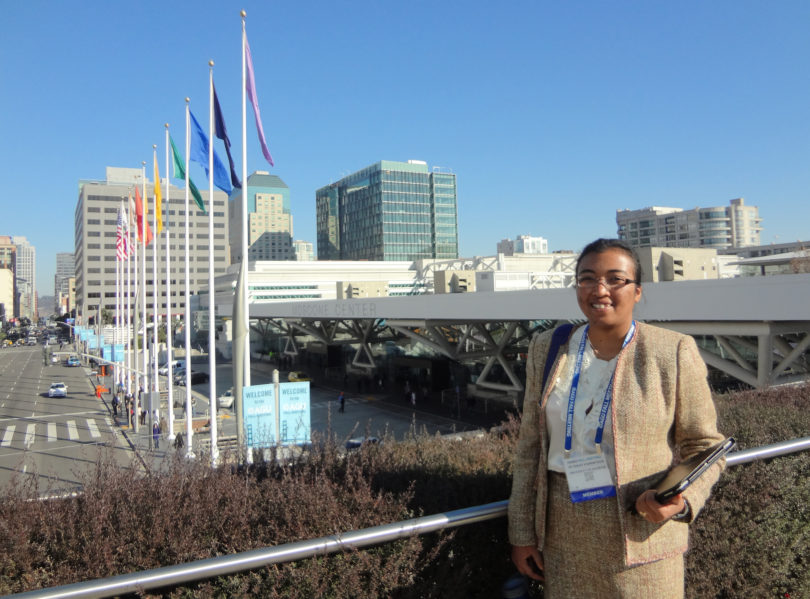 UGA geology doctoral student Ny Riavo Voarintsoa is the recipient of a Faculty for the Future Fellowship award. Sponsored by the Schlumberger Foundation, the award supports talented women from developing and emerging countries who are pursuing advanced degrees in science and engineering at leading universities worldwide.

Recipients are chosen based on their leadership qualities, academic ability and engagement toward science and education as a development tool in their home country.

A native of Madagascar, Voarintsoa studies paleoclimate or the changes in climate throughout history. Her current research focuses on the use of cave deposits, particularly stalagmites, to understand these changes in southern Africa and Madagascar.

“I use geochemistry, petrography and mineralogy as approaches to reconstruct paleoclimate records in southern Africa and Madagascar, two regions of the Earth that have received the least attention in paleoclimate studies,” said Voarintsoa. “Stalagmites provide excellent paleoclimate records because they can be accurately dated and climate data from them can be carefully investigated at very high resolution, at annual or seasonal scale. This improves our understanding of land-ocean-atmosphere interactions at shorter time intervals.”

Paleoclimate information can be integrated into computerized modeling to better predict the likely state of the Earth’s future climate, she also said. Understanding the climate state of the Earth in the future allows scientists to take appropriate precautions to reduce the risks in the affected regions.

Madagascar’s ecosystems and biodiversity are endangered, and there is major uncertainty in interpreting the ecosystem changes in Madagascar, as either driven by climate or caused by human activity, according to Voarintsoa. Modern facts and narrative stories suggest humans have ravaged the island, but recent scientific investigations have argued for climate-related causes.

“My interest is thus to improve the scientific community’s understanding on climate versus human influences on the Madagascar ecosystem,” she said. “I expect to contribute the data collected in this paleoclimate study to be used in future climate prediction and climate simulations by government agencies.”

Voarintsoa obtained both her Maitrise, equivalent to a bachelor’s degree in geology, and her Diplome d’Etudes Approfondies, equivalent to a Master of Science in geology, at the University of Antananarivo in Madagascar. In 2010-2011, she was selected to conduct GIS-based research with Ronadh Cox as a visiting scholar at Williams College in Williamstown, Massachusetts.