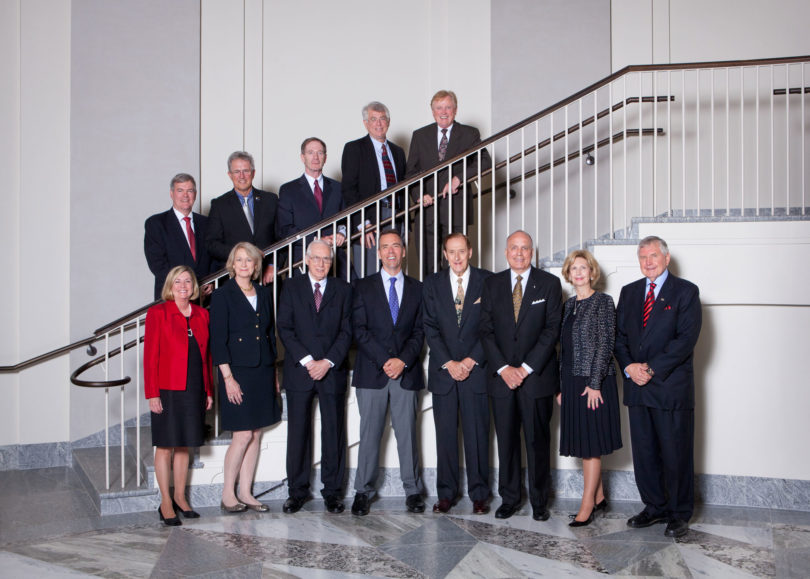 The University of Georgia Graduate School has honored 16 graduates with the 2013 Alumni of Distinction Award for achieving exceptional success in their professional careers and in service to their community.

Athens, Ga. – The University of Georgia Graduate School has honored 16 graduates with the 2013 Alumni of Distinction Award for achieving exceptional success in their professional careers and in service to their community.

The Graduate School Alumni of Distinction Award was established in 2012 by the University of Georgia’s Graduate Education Advancement Board, and the first recipients were named in 2013. Recipients have accomplished meritorious achievement and success in their professional field, exemplify themselves as a mentor and serve as a role model in their profession, and have made substantive contributions to their professional field at the regional and national levels as evidenced by honors earned in the profession. The professional achievements and contributions to society made by these graduate alumni exemplify the University of Georgia mission, “to teach, to serve and to inquire into the nature of things.” All graduate-level UGA alumni are eligible to be considered for the annual award. Awardees are:

N. Kirby Alton, of Thousand Oaks, Calif., was the founding scientist and former senior vice president of development for AmGen Inc., a biotechnology company that was the first to produce a successful human biopharmaceutical for treating human disease. He was the founder and director of Ascent Air LLC and is the current chairman of the board of directors of Abeome Corp. Alton currently serves on the UGA Research Foundation board of directors.

Devron R. Averett, of Cardiff By The Sea, Calif., is the current chief scientific officer at EcoActive Surfaces Inc., which provides consulting services in the discovery and development of human medicines. He has been instrumental in developing technologies that have resulted in the development of medicines for both HIV and hepatitis B and is the inventor on more than 17 issued and nine pending patents.

Phillip G. Bartley, of Athens, is the CEO, president and co-founder of Innovative Measurement Solutions Inc. His work has focused on the development and improvement of techniques used for measuring the electromagnetic properties of materials, which have become industry standards and have been utilized by the U.S. military, NASA and medical researchers.

James Eugene Bottoms, of Tucker, is the senior vice president of the Southern Regional Education Board and is the founder and director of the “High Schools that Work” program, which is used in more than 1,100 high schools in 26 states. He was appointed to the National Commission on the Senior Year, a U.S. Department of Education initiative that studies students’ final year in high school. Bottoms is the former executive director at the American Vocational Association and served as director of educational improvement for the Georgia Department of Education for 13 years.

Maxine Hubbard Burton, of Athens, is the founder and president of burton + BURTON, a supplier of balloons and related gift items with a worldwide customer base. She was appointed to the Georgia Council of the Arts in 2013 by Gov. Nathan Deal. She received the Ernst and Young’s Entrepreneur of the Year in the retail/wholesale category and the Spirit of Georgia Award from the Georgia Industrial Development Association.

Richard J. Cebula, of Jupiter, Fla., is the Walker/Wachovia Bank Professor of Finance in the Davis College of Business at Jacksonville University and the author of 13 books and almost 500 articles concerning finance, economics, business, management and statistics. He is ranked among the world’s leading economists by Research Papers in Economics and is the president-elect of the Mid-Continent Regional Science Association.

Richard T. Cupitt, of Washington, D.C., served as an expert to the 1540 Committee of the United Nations Security Council, which dealt with ways to combat the proliferation of weapons of mass destruction and the activities of terrorists and other criminals. Cupitt was instrumental in developing UGA’s Center for International Trade and Security into a global research center for the study of security export controls.

Peter C. Griffith, of Baltimore, Md., is the founding director of NASA’s Carbon Cycle and Ecosystems Office, which supports the North American Carbon Program and is a component of the U.S. Global Change Research Program. Griffith is currently the chief support scientist for Sigma Space Corp. As a result of his efforts with the Large Scale Biosphere Atmosphere Experiment in Amazonia, NASA presented him with a Group Achievement Award in 2003.

Joel D. Haber, of Golden Bridge, N.Y., is a clinical psychologist and parenting expert who focuses on bullying prevention. He authored “Bullyproof Your Child for Life,” co-authored “The Resilience Formula” and founded the Respect U Program, a bully prevention and management curriculum used in schools, camps, organizations, sports teams and families. He serves as a leading expert for the LG Text Education Council and is an adviser to Cartoon Network’s “Stop Bullying: Speak Up” campaign.

Charles E. Hamner Jr., of Chapel Hill, N.C., is the founder and chair of the board of directors of the Hamner Institute for Health Sciences. He previously served as the president and CEO of the North Carolina Biotechnology Center while also teaching in the obstetrics and gynecology department at the University of North Carolina School of Medicine. In 2011 he received the North Carolina Award for Public Service, the highest honor a civilian can be awarded.

Donald K. Ingram, of Baton Rouge, La., is a professor at the Pennington Biomedical Research Center at Louisiana State University. He founded the Laboratory of Experimental Gerontology at the National Institute on Aging and previously was the chief of the Behavioral Neuroscience Section of the National Institutes of Health. He has developed and patented four drugs to treat Alzheimer’s disease and authored more than 300 scientific publications.

William B. Jones, of Jackson, Ga., is the founder and president of Jones Petroleum Company Inc. As a former superintendent of the Butts County School System, he established the first fully funded public kindergarten program in a rural Georgia school system. Jones served four terms as a Georgia state representative during which time he was instrumental in passing legislation that required prospective teachers to undergo professional testing prior to receiving a teaching certificate.

Thomas L. Lyons, of Atlanta, is an expert in the diagnosis and treatment of endometriosis and currently works as an OB-GYN. His career has focused not only on women’s health care, but also on the education and training of gynecologists, developing specialized surgical procedures. Previously, Lyons was a team physician for UGA’s women’s athletic teams. He played football for UGA and was selected in the 1971 NFL draft by the Denver Broncos, for whom he played for six seasons.

Carl E. Swearingen, of Atlanta, is the former senior vice president of BellSouth Corp. and the president of BellSouth Telecommunications in Georgia. He serves on the University of Georgia Foundation Board and the board of directors for the Metro Atlanta Chamber of Commerce. Swearingen was appointed by Gov. Sonny Perdue to the Commission for a New Georgia and has served as chairman of the Technical College System of Georgia Board.

Ronald L. Vaughn, of Tampa, Fla., has been the president of the University of Tampa since 1995. Prior to becoming president, Vaughn was the coordinator of the marketing department and was the Max H. Hollingsworth Endowed Chair of American Enterprise. He was director of the M.B.A. program, dean of the College of Business and Graduate Studies, and co-chief academic officer.

Karl E. Wycoff, of Herndon, Va., is the senior policy adviser to the Corporate Council on Africa. He previously served in a variety of roles at the U.S. Department of State that included deputy assistant secretary for African Affairs, director for Central African Affairs, head of the Action Against Terrorism Unit and deputy coordinator for counterterrorism.