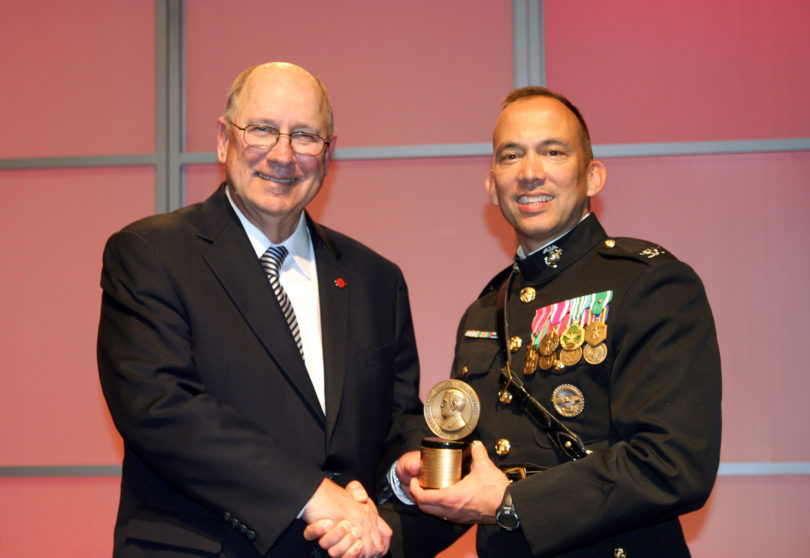 Salas, a 1987 public relations alumnus of the Grady College, is the fifth recipient of the medal.

The college’s highest honor, the Dean’s Medal was established in 2007 to honor an alumnus who plays a significant role in a communication event that rises to the status of case study in one of the journalism and mass communication disciplines.

“Col. Salas provided exemplary leadership when during the first attempt to dedicate the Martin Luther King Memorial (the one canceled by Hurricane Irene), he took his Pentagon public affairs staff over and engaged them in a discussion about the King message and what it meant for their work as communication leaders,” said Grady College Dean Cully Clark. “It was inspiring, moving and proved that the ‘dream’ lives on.”

Salas oversees public affairs, grassroots outreach, media relations and internal news for the Marine Corps, a 220,000-person organization with a $29 billion budget. Under his supervision, the Corps has received numerous awards for its recruiting and communications through social media outlets and now boasts more than one million Facebook followers. He has dealt with sensitive issues, such as the repeal of the “Don’t Ask, Don’t Tell” policy and the current operations in Iraq.
Enlisting in the Marine Corps Reserve while still in high school, Salas was commissioned as a second lieutenant immediately after graduating from UGA. He has filled military public affairs roles in locales such as Shawnee Mission, Kan.; Parris Island, S.C.; Norfolk, Va.; Camp Pendleton, Calif.; Norway; Haiti; and Iraq before his current assignment at the Pentagon.
In addition to his UGA degree, Salas graduated from the University of Oklahoma with a master’s degree in communications. His formal military education includes Joint Professional Military Education at the Joint Forces Staff College in Norfolk, Va., Command and Staff College non-resident course; Amphibious Warfare School non-resident course; Recruiting Management course, Defense Information School; and Combat Engineer Officers course.
Salas and his wife Tracey reside in Ashburn, Va., and have four children.